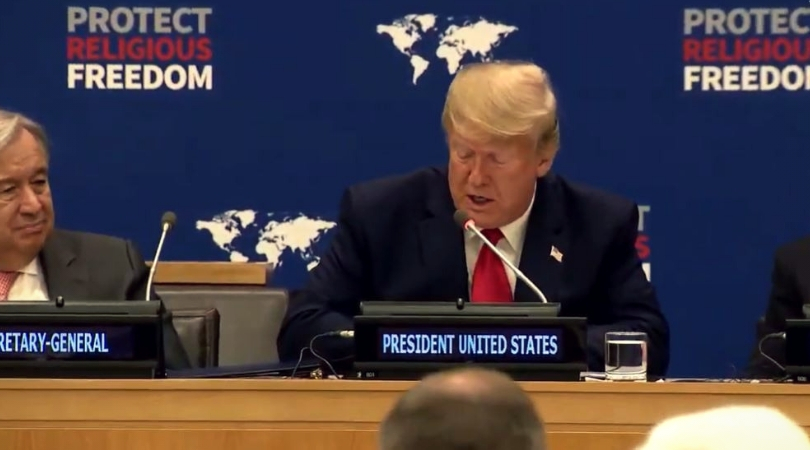 At the United Nations in New York on Monday, Trump headed an event on religious persecution and religious freedom. He is the first U.S. president to lead a U.N. event on the subject. President Trump will also deliver a speech to the U.N. General Assembly on Tuesday morning, for the third time in his presidency.

During Monday's event — titled "Global Call to Protect Religious Freedom" — Vice President Mike Pence remarked on attacks on houses of worship around the world, saying, "These attacks strike at the heart of everything free peoples hold sacred."

Pence noted that this is the first time a U.S. president has headed a U.N. event about religious liberty. He introduced President Trump as "a tireless champion of the freedom of religion."

Trump called it "very sad, in many ways" that he is the first president to head a U.N. event on religious freedom.

The president said in his speech, "The United States is founded on the principle that our rights do not come from government, they come from God."

Trump went on to declare, "Today, with one clear voice, the United States of America calls upon the nations of the world to end religious persecution."

"It is estimated that 11 Christians are killed every day ... for following the teachings of Christ," Trump said. "Who would even think that's possible, in this day and age, who would think it's possible?"

The president drew attention to Andrew Brunson, an Evangelical pastor who was arrested in Turkey in 2016. In diplomatic discussions with the Turkish government, the Trump administration eventually secured Brunson's release in 2018.

Brunson was present for the president's speech Monday and received a round of applause.

Today, with one clear voice, the United States of America calls upon the nations of the world to end religious persecution.

At times during his presidency, Trump has been outspoken on religious liberty, both in the United States and around the world.

On the National Day of Prayer in May, announced a new rule broadening health care workers' rights to opt out of procedures at odds with their religious beliefs. On the same day, he signed an executive order intended to help religious leaders speak out more boldly on political issues without fear of losing non-profit status.

In mid-July this year, the second annual Ministerial to Advance Religious Freedom took place in Washington. In connection to the event, the president hosted more than a dozen victims of religious persecution in the Oval Office for a televised meeting.

Many of those at the Oval Office meeting during July's Ministerial were also present at Monday's event. During his speech, Trump invited them to stand up for an applause.

Following Trump's remarks, Secretary-General of the United Nations António Guterres called religious freedom "a pressing global issue, and one which is also very close to my heart."

"The persecution of religious minorities is absolutely intolerable," he said later in his remarks.

Guterres trumpeted the controversial Abu Dhabi declaration, which was signed by Pope Francis and Ahmed Al-Tayyeb, the grand imam of Al-Azhar.

Many Catholics criticized the document, which says in part, "The pluralism and the diversity of religions, colour, sex, race and language are willed by God in His wisdom, through which He created human beings."

Later, Guterres spoke of "two new initiatives" he has started at the United Nations. He mentioned an initiative "against hate speech," as well as an initiative to protect religious sites from violence and terrorism.