The populist conservative parties that swept the continent after Donald Trump was elected president in 2016 understand that a second Trump term will boost their momentum. Conversely, a rejection of Trump in November could also "suck the wind out of their movements," according to Guy Taylor of the Washington Times.

"A Trump victory is crucial to us," Iván Espinosa de los Monteros, a top official in Spain's new nationalist Vox Party, told Taylor. Vox is a major conservative force in Spanish politics as a counterpoint to the Social Democrat and Communist Parties. "Trump has been a beacon for the movements of freedom and conservatism around the world," said Espinosa, who leads Vox's international relations wing.

"The U.S. vote in November is probably one of the most important elections for conservatives around the world since the Reagan era," he said. "If Trump loses, we would have to work twice as hard just to stay in the same place."

"This is more than a political crossroads," Dr. Niall McCrae, a European expert on Chinese affairs and co-author of Moralitis 2018: A Cultural Virus told Church Militant. "It is a battle for the very existence of Western civil democracy and its Judeo-Christian morality," McCrae said.

"A victory for the Democrats would make Joe Biden president in name only. The USA would have fallen to radical Marxists, and the progressive global order would have captured the bastion of the free world."

Various other European leaders recognize the huge stakes attached to the U.S. election.

The USA would have fallen to radical Marxists, and the progressive global order would have captured the bastion of the free world.

The Brexit Party leader pooh-poohed British commentators predicting a Biden win, asserting they are making the same mistake they did in the 2016 contest between Trump and Democratic presidential nominee Hillary Clinton.

Indeed the populist Right of old Europe are intensely watching their investment in a Trump win.

Hungary's Péter Szijjártó was the only EU foreign minister to attend the signing of Israel's agreements with the United Arab Emirates and Bahrain on Wednesday at the White House.

During his visit, Szijjártó told U.S. National Security Advisor Robert O'Brien and White House Chief of Staff Mark Meadows that Hungarian-U.S. relations are at their peak. He added that both Trump and Hungarian prime minister Viktor Orbán take a firm stand "against illegal migration, think similarly about protecting Christian communities and supporting families and agree on world policy issues."

In a May meeting with President Trump in the White House, Orbán laid out what's at stake in Hungary's alliance with the Trump administration, saying the two countries are united "on fighting against illegal migration, on terrorism and to protect and help the Christian communities all around the world."

One month later, President Trump — in a joint message with Polish president Andrzej Duda — described the strong connection and shared history between the United States and Poland:

The American and Polish people enjoy one of the world's oldest, strongest and most enduring friendships. Polish patriots battled by our side to secure American independence. American and Polish warriors fought and died together to defeat the Nazis in World War II. The United States stood shoulder-to-shoulder with Poland in its courageous struggle against communist oppression.

"Our bond has been forged in battle, sealed in blood, and strengthened by our shared cultural values," Trump underscored.

The 'Headliner' at Stake

Some experts argue that if Trump loses, conservative groups will suffer, but they will not go away.

"The United States is the headliner for [the conservative movement] under Trump, so if he loses in November, the headliner goes away," said Gordon Adams, a longtime international affairs expert and professor emeritus at American University in Washington, who was quoted in Taylor's article. But, Adams claims the populist and nationalist forces that Trump and conservative allies purport are now "out of the box."

The resonance of having the most powerful country in the world being run by somebody who is sympathetic to the far-Right perspective would be a huge loss conceptually in terms of the credibility of what these parties trying to do in Europe. But does that mean there will be a reversion to the norm? Will the lid on Pandora's box be closed because Trump lost? The answer is no.

Yes, these forces in Europe will lose the megaphone they currently have in Donald Trump and that will, to some degree, discredit what they're trying to do. But I think these forces are out of the box, and the question now is, where do they evolve to politically in Europe going forward?

European conservatives would be devastated by a Trump defeat, as the liberal establishment would deride them as backward-looking bigots on the wrong side of history. They would be curtailed by hate crime laws, and in election campaigns they would be denied the oxygen of publicity. The mainstream media would do what's expected of them, ridiculing and vilifying any conservative or libertarian who becomes too popular.

Indeed, Espinosa has argued that the "elite progressives" of Western Europe will try to dominate the political agenda in countries such as Spain by muzzling conservative parties like Vox.

Blocking Vox's members from pushing its message on social media is already in the works in Spain, according to Espinosa. He said, "Spain's ruling coalition of social democrats and communists has sought to undermine Vox since it won 52 seats in the 350-seat Parliament last year."

"This crackdown on us on social media is an attempt to cripple us," he said, adding that the situation is "different from the U.S." because of a lack of any real plurality in the Spanish political media.

"Spain does not have any traditional media outlet that is conservative," Espinosa said. "Every broadcaster is leftist or far-leftist. So any coverage we do get, they give us a bad rap, even though we're the third party in Spain, with 15% of the market share."

"If we disappear from social media, we'll be wiped out," he asserted.

McCrae sees a win for President Trump as a must. It "would put the wind in the sails of the resistance to progressive hegemony."

European conservatives would be devastated by a Trump defeat, as the liberal establishment would deride them as backward-looking bigots on the wrong side of history.

The Moralitis 2018: A Cultural Virus coauthor further points to something not often explicitly expressed either by those rooting for Trump's win or his defeat.

"Trump will not rest on his laurels in a second term," Dr. McCrae says. "He will act against the destructive forces of cultural Marxism, and European parties will be able to cast aside the defeatism of pundits on the Right, and move forward as a dynamic, youth-energized force." 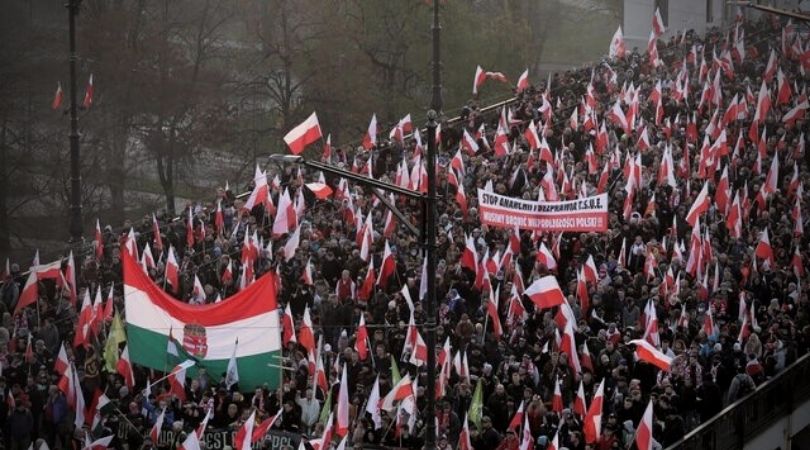