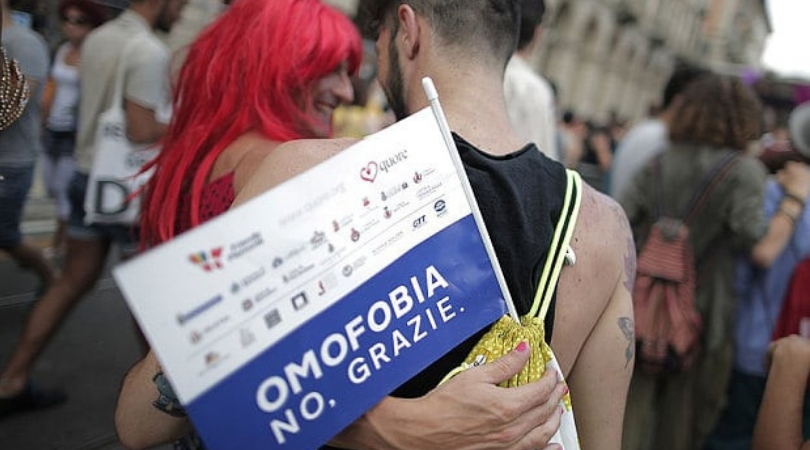 
The Italian archdiocese of Turin is getting backlash for hosting what some have called "marriage prep" for homosexual couples.
Currently the only diocese in Italy to have a priest in charge of care of homosexual couples in civil unions (the gay civil unions law was approved in the country in 2016), Fr. Gianluca Carrega hosted a Lenten spiritual retreat on homosexual fidelity.
Titled "God's fidelity as the foundation for fidelity in human relations," it was attended by more than 40 people and organized by Carrega, who this time made the arrangements quietly, as last year his initiative had to be suspended owing to backlash from conservative Catholics.
Last year his initiative had to be suspended owing to backlash from conservative Catholics.
The 2018 event that never came to be, named "Worth of fidelity," would include the presence of Jesuit priest Fr. Pino Piva, described by Catholic outlet La Nuova Bussola Quotidiana (LNBQ) as "a less famous and less impudent" Fr. James Martin.
LNBQ ably traces Fr. Piva's most important connections in Italy: liberal archbishop of Bologna Matteo Maria Zuppi (who's written the preface for the Italian edition of Fr. James Martin's book Building a Bridge) and Albano Bishop Marcello Semeraro, secretary of the C9 (the Council of Cardinal Advisors created by Pope Francis). The diocese of Albano has for five years now accommodated the annual meetings of the Italian Forum of LGBT Christians, and both Fr. Piva and Fr. James Martin were present at the 2018 edition of the forum, along with Bp. Semeraro.
In his interviews about last year's retreat, Fr. Carrega declared that "gays deserve fidelity too." The event was promoted in the light of the recently approved homosexual civil unions law, which had dropped the obligation of fidelity from the bill in a desperate move to appease the opposition, who argued that the original bill was unconstitutional for trying to equate gay civil unions with natural marriage.
Father Carrega's goal was to fill the gap left by the new law. "The law might not impose the obligation of fidelity, but reflecting upon the affectivity of homosexuals, we can say that everyone deserves unique, exclusive love."

He acknowledged the "many fruits" of the civil unions law, even stating he perceives a cultural change, as of late he had been invited to only one traditional marriage ceremony, but to three homosexual union celebrations.
Father Carrega's anedoctal experience certainly doesn't represent a reliable sample of the Italian population, as the homosexual civil unions law proved to be a complete flop. Prominent Catholic author Rino Camilleri questioned Fr. Carrega's "cultural change": "Has the number of homosexual civil unions exceeded the number of standard unions in Torino, by any chance? Or was the priest invited to more civil ceremonies than to religious ones? Or does he actually just prefer to attend civil unions celebrations?" Camilleri also sadly observed that "the law now dictates our pastoral ministries."
In 2018 Fr. Carrega described his spiritual retreat's goal "to discuss the value of fidelity and love, in the light of the biblical message. ... A couple of believers in a civil union will also bring the religious faith to their cohabitation."
He also asserted his belief that the Church "must reflect on the value of homosexual affectivity. … We must appreciate the beauty in their lives."
Speaking on camera, he claimed:

[T]he novelty of our times is in trying to understand these relationships not only from the point of view of the consummation of the homosexual act, but also the affectivity context that is part of it — a novelty that pastoral ministries perceive before the Magisterium. The pastoral ministry has another rhythm, so the Church [in the pastoral context] can then say things that are more innovative, if compared to the Magisterium… . My wish is that our pastoral work can provoke an internal reflection for the Magisterium and for the dogmatic reflection of the Church.

Local Turin edition of newspaper Corriere della Sera went as far as to report the event as some sort of "marriage preparation course for homosexuals", even asking Fr. Carrega what was the retention rate for homosexual couples participating in his activities, to which the priest replied: "Exactly the same as heterosexual couples. Proportionately, the percentage is the same."
Father Carrega is also the archdiocese's representative for the Culture and Communication department, the director of the Cultural Pastoral Ministry and a professor in both Turin's Superior Institute for Religious Science and Theological Faculty. In 2016 he was teaching a specialization course in the Theological Faculty called "Biblical prospective on the family. Sociological horizons and theological re-readings."
The description of the course's program starts: "How traditional are the families in the Bible? A study of the family models of the Old and New Testament." It's fair to assume that the conclusions of his study attempt to raze timeless Church teaching and replace it with relativistic "novelty" family models. This is what Fr. Carrega is passing on to seminarians.
After the controversy had reached too many newspapers and Catholic public figures last year, Abp. Cesare Nosiglia of Turin decided to cancel the event. In his official statement he said the service provided by the archdiocese's pastoral ministry for homosexuals intended to "help homosexual people to understand and fulfill God's project for them. This doesn't mean approval of homosexual behaviors or unions, which remain morally unacceptable choices for the Church … . For that I consider it opportune, along with Fr. Gianluca Carrega, whose work I appreciate, to suspend the initiative."
But this year, secretively, away from the media heat, the spiritual retreat finally took place — during Lent, the most sacred and penitential time of the Church's liturgical year. Newspaper La Stampa broke the news on the event only after it had already happened, reporting the testimony of LGBT activist Massimo Battaglio, who attended the retreat and declared that "when we are in the presence of homosexual believers, we are sure that homosexual love is love. And love is the essence of Christianity."
We are sure that homosexual love is love. And love is the essence of Christianity.
Archbishop Nosiglia released no public statements so far, even though several Catholics urged him to come forward. La Nuova Bussola Quotidiana wrote, "This time the initiative had the green light from archbishop Nosiglia. It's unknown if he has actually blessed the event, but it's evident that if Fr. Carrega still carries all of his duties, it means all is well ... with the way he's leading pastoral ministry for people with same-sex attractions."