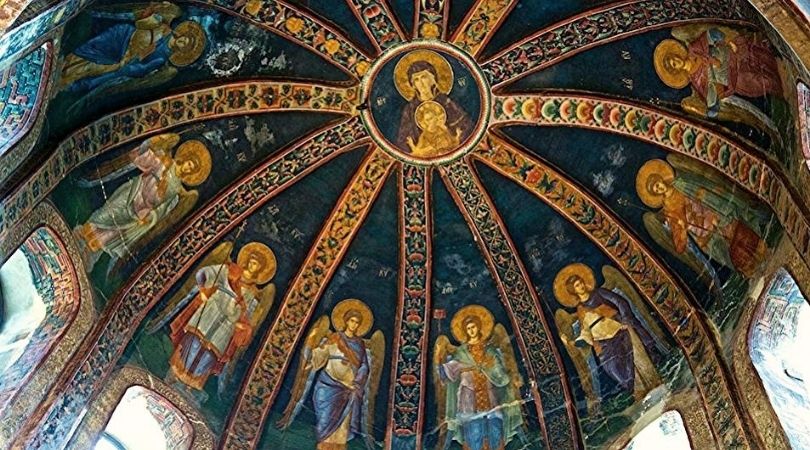 ISTANBUL (ChurchMilitant.com) - Turkey has issued a presidential decree ordering the conversion of the nation's best-known Byzantine monastic church into a mosque.

President Recep Tayyip Erdoğan published the executive order Thursday sealing the fate of the Church of the Holy Savior in Chora, Istanbul, a month after Turkey's top court delivered a unanimous verdict declaring the basilica of Hagia Sophia a mosque.

The decree, printed in the National Gazette, transfers "the administration of the Kariye Mosque [Chora Church] to the Directorate of Religious Affairs [Diyanet]."

In accordance with Article 35 of law No. 633 on the Presidency of Religious Affairs it orders the opening of the "mosque for [Islamic] worship."

Erdoğan's diktat overturns an earlier ruling of the Council of Ministers from April 23, 1945, which had directed the ancient monastic church to be used as a museum and warehouse.

The executive order formally implements the change in the church's status, which was passed in Dec. 2019 by a decision of Turkey's Council of State.

"Anyone could have predicted this monumental fiasco from the moment Pope Francis and al-Tayyeb signed the deal in February 2019," Spencer asserted.

One cannot help but wonder if al-Tayyeb was having a little joke at Pope Francis' expense.

"The document on human fraternity that the pontiff signed with the Sheikh of al-Azhar and is now aggressively pushing upon the Catholic Church states that 'the protection of places of worship — synagogues, churches and mosques — is a duty guaranteed by religions, human values, laws and international agreements," Spencer quoted.

"The document did not and could not eradicate Islam's supremacist doctrines and long tradition of the appropriation of the houses of worship of other faiths to demonstrate the victory and supremacy of Islam," the author of 21 books on Islam explained.

"One cannot help but wonder if al-Tayyeb was having a little joke at Francis' expense by including in the human fraternity document the stipulation that 'every attempt to attack places of worship or threaten them by violent assaults, bombings or destruction is a deviation from the teachings of religions as well as a clear violation of international law,'" Spencer remarked.

Spencer noted that "any mention of the forcible seizure of the places of worship of one faith by the aggressive and supremacist adherents of another was conspicuous by its absence" in the human fraternity document.

"That is not condemned in the document — which is not to say that it would have made any difference if it had been. And now that appropriation proceeds apace," he lamented.

Originally built in the fourth century as the main church of the Chora monastery, the church was rebuilt around 1077–1081 and again after a partial collapse caused by an earthquake early in the 12th century.

The monastery was either damaged or allowed to deteriorate during the Latin Occupation of Constantinople, and by the end of the 13th century, fell into a poor condition.

Statesman and scholar Theodore Metochites undertook extensive restoration and renovation of the Chora around 1316.

When the Ottoman Turks conquered Constantinople in 1453, Chora monastery was one of the first Christian sanctuaries to fall.

During the final siege, the sacred palladium of Constantinople — the miraculous protective icon of the Virgin said to have been painted by St. Luke — was stored at Chora monastery, from which it was paraded along the land walls to provide spiritual defense against the enemy.

Francis' pact did not and could not eradicate Islam's supremacist doctrines and long tradition of the appropriation of the houses of worship of other faiths.

On May 29, Ottoman soldiers found their way to Chora and hacked the icon to pieces.

Muslim ruler Hadim Ali Pasha converted the church to a mosque between 1495–1511, adding a mihrab (a niche that indicates the direction of the Kaaba in Mecca, facing which Muslims are required to pray) in the main apse and replacing the belfry with a minaret.

The site was renamed the Kariye mosque — the Arabic translation of the name Chora, meaning "village" or "countryside" in Greek.

Under Turkey's secular founder-president Kemal Atatürk, the building was secularized in 1945 and transformed into a museum under the jurisdiction of the Hagia Sophia Museum.

Chora is an increasingly popular tourist destination known for its best-preserved examples of stunning Byzantine mosaics and frescoes. The interior is covered with biblical scenes and portraits of Jesus and the saints dating back to the 14th century.

"Holy Savior in Chora is different, as its beautiful mosaics and frescos cover almost all the church's walls and domes," he observed.

"It would be hard to imagine it being returned into a mosque without totally covering them over," Monnier noted.

"Praying in Hagia Sophia ... is a gesture of erasure with regard to Orthodox Christianity because for Muslims to be able to pray inside the basilica, it will be necessary (at least for the time of prayer) to cover the mosaics and the frescoes," Ariane Bonzon, a journalist specializing in Turkey, told Le Figaro.

"This is part of a historical continuity — even if it is not comparable — with the destruction of Armenian and Greek traces (churches, houses) and the desecration of Christian cemeteries throughout the country," she added.

In July, Erdoğan assured the international community that the Hagia Sophia mosaics and frescoes from the ninth and 10th centuries would be covered only during the time of Muslim prayer — five times a day.

However, according to recent statements from Turkey's Diyanet, the images are still covered and have been hidden from visitors for almost three weeks.

Diyanet officials were unwilling to reveal if and when the images would be unveiled to non-Muslim tourists and visitors.