Priests, Laity Arrested for Trying to Save Babies in NJ Abortion Mill 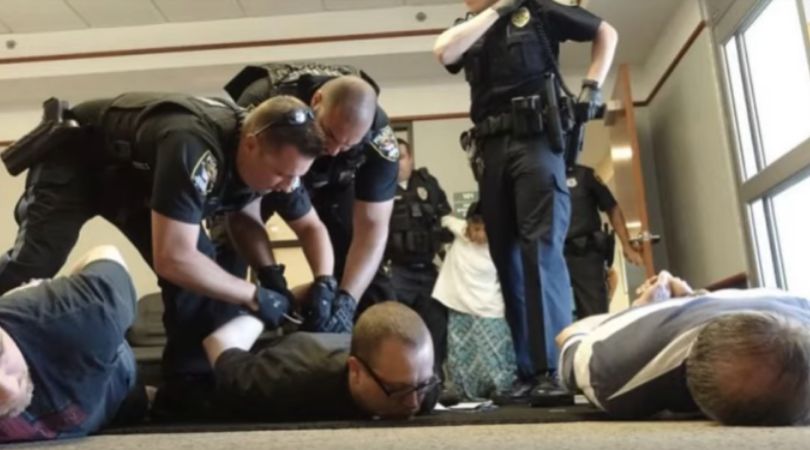 MORRISTOWN, N.J. (ChurchMilitant.com) - Two priests and two lay people were arrested on July 13 for urging women not to abort their children at a New Jersey abortion mill. They were handcuffed and dragged out of the Morristown facility with more than 10 police cars on the scene.

Police arrested Fr. Dave Nix and Fr. Fidelis Moscinski, C.F.R., and two laypeople, William Goodman and a woman who uses the name Baby Jane Doe to express her unity with the babies about to be killed. They are all members of the Pro-Life Red Rose Rescue.

The group of four encouraged women to choose life for their babies, saying, "You were made to love and to be loved … your goodness is greater than the difficulties of your situation. Circumstances in life change. A new life, however tiny, brings the promise of unrepeatable joy."

Nix reported on Twitter that "we may have had two turn-arounds." Reports said one woman kept her baby.

Dr. Monica Miller, associate professor of theology at Madonna University in Michigan and director of Citizens for a Pro-Life Society, reported on another potential turn around: "We know that one teenage girl -- pressured by her mother to get the abortion, did leave the clinic and she was talked to by sidewalk counselors and has phone numbers of places she can go for help! Pray for this girl!! and Her mother!!"

In comments to Church Militant, Fr. Nix said that it's not easy to measure the success of the rescues in terms of numbers:

Often the parents preparing to kill their preborn children inside the abortion center are hostile even as we peacefully hand out roses to them. However, we sometimes find out that later — after we are arrested — some parents' consciences were pricked by the dramatic events and they subsequently decide to leave the abortion center before killing their child.

In fact, the Michigan Red Rose Rescue (that I was not at) had over 10 people leave because of the disruption in the abortion facility. Our rescue this week in New Jersey may have had one or two people leave. Of course, we have no proof that such couples then refrain from returning to an abortion center, but even if they don't, we still wish to offer our suffering in handcuffs in union with the death of children at the hands of much worse instruments than handcuffs.

Despite the initial roughness of the takedown, the police "were open to our peaceful mission as we got booked," Nix tweeted. "We talked for hours in the substation."

Our trial is in 10 days and we may have had two turn-arounds. Despite their initial roughness, the cops were ultimately open to our peaceful mission as we got booked and. We talked for hours in the substation. https://t.co/mgLzwKEF6L

Goodman told Church Militant that the captain gave the rescuers bottled water and that one officer was curious about the cassock Fr. Nix carried in his duffle bag.

Another police officer asked for Our Lady of Guadalupe prayer cards that the rescuers had brought with them for himself and his girlfriend.

We plan an affirmative argument for the 'defense of others' with the hopes of a constitutional challenge to provide personhood protection to children in the womb.

The rescuers were released on Saturday. They are expected to appear in court on Aug. 26, according to Goodman.

"We plan an affirmative argument for the 'defense of others' with the hopes of a constitutional challenge to provide personhood protection to children in the womb," he said.

Moscinski said they dedicated Saturday's rescue to the Immaculate Heart of Mary because it is the feast of the third apparition of Our Lady of Fatima.

"We're really calling upon the intercession of the Immaculate Heart of Mary this morning," Moscinski said. "We are trusting in the power of God's grace to affect people's minds and hearts."

I identify as a giant fetus. Please respect that.

The mission statement of the Red Rose Rescue explains that rescuers "enter the actual places where the innocent unborn are about to be 'dragged to death,'" continuing:

Red Rose Rescuers stay in the place of execution in solidarity with their abandoned brothers and sisters performing a non-violent act of defense through their continued presence inside the killing centers remaining with them for as long as they can. The Rescuers stay with the abandoned unborn, as the manifestation of our love for them recognizing that unborn children, as members of the human family, have a right to be defended.

When police come, the rescuers go limp but do not resist. The rescuers will not leave the unwanted, but must be "taken away."

The four who were arrested represent a larger coalition of Red Rose Rescuers situated throughout the United States, including in Detroit and New Orleans.

Since September 2017, 14 Red Rose Rescues have taken place in the United States on various feast days, including the feasts of St. Michael the Archangel and St. Joseph.

Father Nix and his rescue crew "refuse to pay fines, as we did nothing wrong except save lives. However, we do have flight and legal fees, so we very much would appreciate if people donated to RedRoadRescue.com."