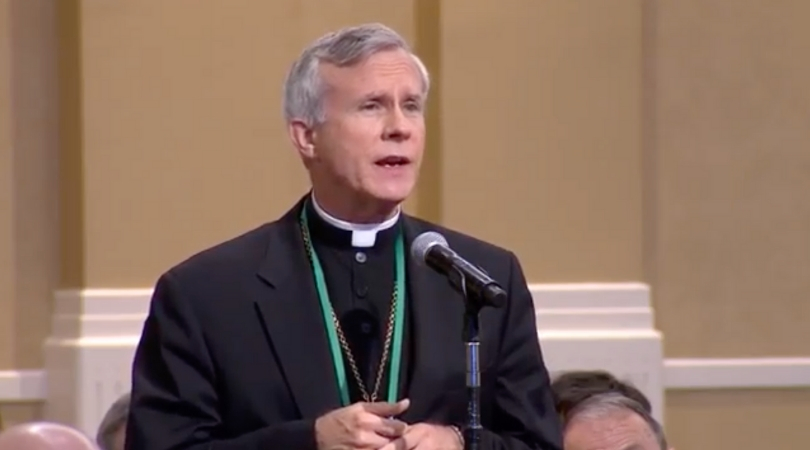 A Texas prelate is breaking the U.S. bishops' silence on Theodore McCarrick.

During the Thursday morning session of the U.S. bishops' meeting in Baltimore, Bp. Joseph Strickland of the diocese of Tyler, Texas addressed his brother bishops, stressing his desire that "a full reckoning of the McCarrick scandal be offered."

The topic of McCarrick had barely been raised in any of the official discussions of the week-long meeting, even though his serial homosexual predation — and the network of bishops complicit in covering for him — was the catalyst for the sex abuse crisis into which the Church has seen itself plunged ever since the announcement of McCarrick's suspension on June 20, 2018.

Strickland also insisted that Catholic laity be involved in the investigation.

"We need that mandatory aspect of the laity involved as much as possible," he said.

Cardinal Joseph Tobin of Newark, New Jersey was dismissive of Strickland's recommendations. "If you weren't aware, both bodies were consulted before the work of this committee entered its final stages," he said. "The recommendations, especially of the NAC [National Advisory Council to the U.S. Bishops], are reflected in this document."

At the start of this week's gathering, the NAC had issued its recommendations to the body of bishops: "The NAC unanimously requests that the U.S. bishops exhort the Holy See to make public the results of diocesan and archdiocesan investigations of Theodore McCarrick."

The chair of the National Review Board made the same recommendation on June 11.

"I believe it should be mandatory that we involve laity in the investigation of any case of sexual abuse by a bishop or corruption, cover-up involving the same," McKnight said. "I believe we should do that because that's the Catholic thing to do."

"Lay involvement should be mandatory to make darn sure that we bishops do not harm the Church in the way bishops have harmed the Church, especially what we have become aware of this past year," McKnight added.

Francesco Cesareo, chairman of the bishops' National Review Board, echoed the same concerns on lay participation.

Addressing the bishops on the previous day, Cesareo expressed skepticism about the current policy of "bishops policing bishops" and the absence of laity involvement — codified in Pope Francis' motu proprio Vos Estis Lux Mundi, the main topic of the bishops' gathering.

"We find ourselves at a turning point, a critical moment in our history, which will determine in many ways the future vibrancy of the Church, and whether or not trust in your leadership can be restored," he said.

Lay involvement should be mandatory to make darn sure that we bishops do not harm the Church in the way bishops have harmed the Church.

"Because of the actions or inactions of some bishops, some in the general public have lost confidence in the body of bishops, despite the sincere efforts of many of you," he added.

The conference discussed a "third party hotline" by which a victim of abuse by a bishop reports the abuse to a contractor, who is delegated by the metropolitan archbishop; the contractor then relays the reports of abuse to the metropolitan, who then reports it to the Vatican, after which a canonical process begins.

In short, the third-party hotline is designed to receive confidentially, by phone or online, reports of possible violations by bishops per Vos Estis.

The "bishops policing bishops" policy can trace its origin to the November 2018 U.S. bishops' assembly in Baltimore, when Pope Francis effectively "pulled the rug out from under the feet of the US Bishops."

At that meeting, Cdl. Daniel DiNardo, president of the U.S. Conference of Catholic Bishops (USCCB), unexpectedly announced that the pontiff had nixed discussion of lay participation and a vote on sex abuse reform — the intended order of business for the conference.

One proposal scheduled to be discussed and voted upon was the establishment of a lay board vested with investigative powers into the actions of bishops.

"Great strides [in addressing the abuse crisis] have been made," said Papal Nuncio Abp. Christophe Pierre in his opening speech, adding that bishops really don't need to involve the laity to any great degree. The nuncio reminded the audience that it is bishops who run the Church, and not laity.

We find ourselves at a turning point, a critical moment in our history, which will determine in many ways the future vibrancy of the Church.

Six months later, on May 9, Pope Francis promulgated Vos Estis, confirming the directives he handed down at the Nov. 2018 USCCB gathering.

The pope's new norms on sex abuse place "the metropolitan archbishop in charge of any investigation into allegations of abuse by brother bishops. The metropolitan's power is near-total."

"It's been a long and difficult year for all of us,” said Bp. Robert Deely of Portland on Thursday.