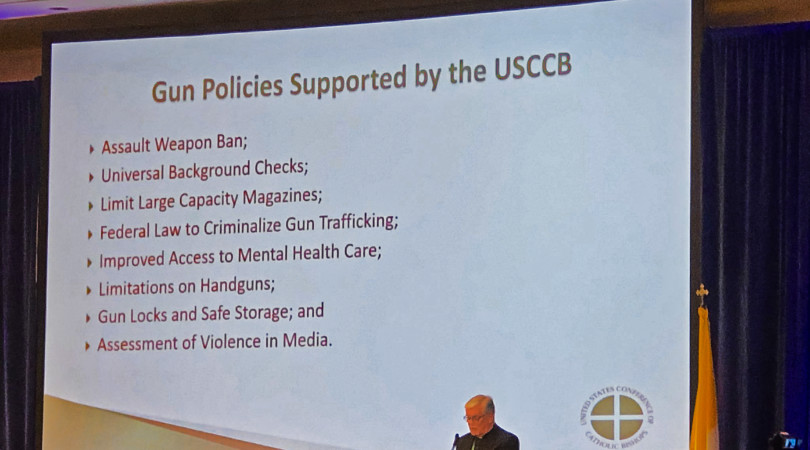 BALTIMORE (ChurchMilitant.com) - Gun control is again one of the main issues U.S. Catholic bishops are discussing, while faithful Catholics are calling them out as hypocrites for choosing politics over religion.

The U.S. Conference of Catholic Bishops (USCCB) is gathering in Baltimore this week for its yearly Fall General Assembly and among the first subjects discussed on Monday is gun control.

In his presentation, Dewayne showed a list of "gun policies supported by the USCCB," including:

He also noted, "Such regulations are helpful, but they will not ban gun violence completely," adding, "For that to happen, we need new ways of thinking. At the heart of the epidemic is a shooter. That shooter somehow in some way turns inward on pain or isolation or illusions that it becomes possible to become desensitized to others, that he loses all empathy."

It's not the first time the Dewayne, or the USCCB, has spoken about gun control. In its March 2018 document "Backgrounder on a Mercy and Peacebuilding Approach to Gun Violence," the USCCB pushed the same talking points.

Following the Aug. 4 shooting in Dayton, Ohio, the USCCB issued a call to change "national policy" regarding firearms, declaring, "The USCCB continues to urge a total ban on assault weapons, which we supported when the ban passed in 1994 and when Congress failed to renew it in 2004."

Dewayne also said the USCCB could modify its financial investments by divesting from gun manufacturers and encouraging Catholics to do the same, according to its Socially Responsible Investment Guidelines, noting such moves "would send a strong signal."

In 2016 the Sisters of the Holy Names of Jesus and Mary (SNJM) and other women's religious orders purchased stock shares in American Outdoor Brands, Sturm, Ruger & Co. and Dick's Sporting Goods in an attempt to bring gun control activism to the boardrooms of American firearm companies.

Bishop Robert McElroy, a prominent supporter of homosexuality, claimed in 2017 that gun control is a social justice issue. He claimed, "One of the problems is the organized opposition to gun control, taking the position that any limitation against guns is a limitation on the core rights of individuals," adding, "The notion that to restrict automatic and semi-automatic weapons is a restriction on personal rights that should be given to society, to me, seems unacceptable."

Catholics on social media are slamming the USCCB:

What special expertise, pray tell, do the US Bishops have concerning prudential judgments on political matters like gun controls and trigger locks? Meanwhile, their post-conciliar edifice is collapsing around their ears.

It's hard to think of a program for the USCCB that would diminish the teaching authority of the US bishops more than the one they have adopted. Are they corrupt or merely incompetent?

Meanwhile
70 PERCENT of Catholics don't believe in the real presence of Christ in the Eucharist.
Shepherding, you're doing it wrong.

Meanwhile, siding more with Democrats than average Americans, the U.S. Conference of Catholic Bishops (USCCB) continues to issue statements calling for so-called "common sense" gun laws, issuing nine statements as of Sept. 1 this year (an average of one each month) and totaling 20 altogether.