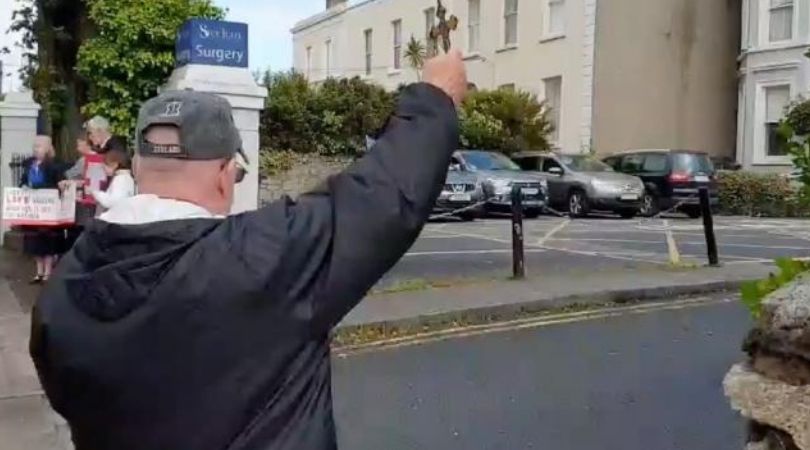 DUBLIN (ChurchMilitant.com) A U.S. priest has performed an exorcism outside an Irish abortion mill to rid it of demonic oppression.

A pro-life activist living in New Mexico, Fr. Imbarrato is often referred to as the "protest priest" and is one of the leaders of the Red Rose Rescue movement.

Imbarrato explained to Church Militant that he had no intentions to do any activism while in Ireland.

Imbarrato was serving as spiritual director for an eight-day pilgrimage, calling the exorcism of the abortuary in Dún Laoghaire "spontaneous" with "God arranging the whole thing."A day after arriving to lead the pilgrimage, a liberal media outlet contacted him to ask why he was in Ireland and if he planned on doing any activism. He said, "No. I have no plans of getting arrested in Ireland."

However, "the protest priest" noted that since his flight wasn't leaving Dublin until 4 p.m. on June 15, he had the entire Saturday morning free.

Having had connected with Brian O' Caithnia, an Irish activist, he decided to go to an abortion facility.

Imbarrato said that he has done exorcisms of abortion facilities all over the United States: Washington, D.C., Florida, New Mexico and Massachusetts. The Dún Laoghaire is his first exorcism outside the United States He plans to revisit Ireland to garner Irish citizenship, as both his maternal grandparents were Irish, and continue his pro-life activism.

He made clear that he "strictly" obeys all Church guidelines regarding the "exorcism of oppression" which all priests can perform.

Father Imbarrato held high a crucifix containing a first-class relic of St. Patrick as he began the exorcism.

Father Imbarrato held high a crucifix containing a first-class relic of St. Patrick as he began the exorcism. He sees significance in St. Patrick's relic because "just as St. Patrick drove the snakes out of Ireland, he is driving the devils out of the abortion clinics." It is the crucifix he uses when doing minor exorcisms (of place) at abortion facilities in the United States.

He then recited the prayer to St. Michael the Archangel written by Pope Leo XIII in 1884 after a vision of a great battle between Satan and the Church.

Imbarrato also recited St. Paul's letter to the Ephesians (6:12), in which St. Paul asks the archangel for protection in "our battle against principalities and powers, against the rulers of this world of darkness, against the spirits of wickedness in the high places."

He prayed the prayer to St. Michael and St. Paul's letter "privately" as is required in minor exorcisms of location.

As he performed the exorcism, a handful of pro-lifers said the Rosary.

At the end of the prayer, he sprinkled holy water and exorcised salt at the entrance of the clinic.

Imbarrato, a leader of the Red Rose Rescue movement, an anti-abortion group, has narrated his experiences in a piece called "How God Called Me to Red Rose Rescues and Personhood Proclamation Presidential Order: A Two Year Chronology."

He was jailed for seven days as a result of staging a Red Rose Rescue at Washington Surgi-Clinic in Washington, D.C. with two other Red Rose Rescuers who passed out red roses attached with a card that reads: "God is Love. And He loves you and your unborn baby! Don't be afraid.

Your life circumstances will change — and this baby will give you boundless joy! Call the numbers on other side of this card. Let us help you! There is help for you and your baby."

They also stood for almost three hours inside and outside the abortion clinic, "offering love and support to the mothers in the hopes of saving the lives of their unborn children."

[If] maybe more priests did what Fr. Imbarrato did, the dragon of abortion would be driven out of Ireland and out of the world.

With Fr. Imbarrato's exorcism of the abortion clinic in Ireland we are getting to the very heart of the evil of abortion. As Satan is the father of death, lies and deception abortion centers are the devil's playground where only blood, death and the end of hope exist. Honestly, if maybe more priests did what Fr. Imbarrato did, the dragon of abortion would be driven out of Ireland and out of the world — replaced with love, life, hope and truth.

Ireland, once considered a Catholic country, voted by a landslide to legalize abortion in 2018.

People who want to support Fr. Imbarrato's ministry can do so through LifeMinistriesUS.