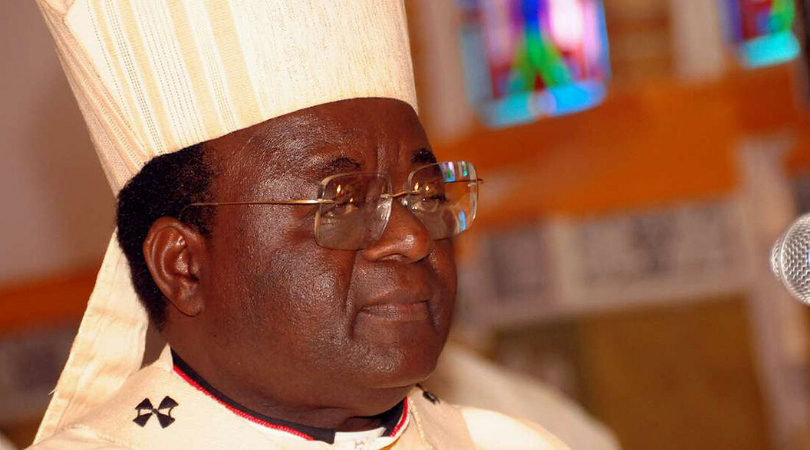 KAMPALA, Uganda (ChurchMilitant.com) - An archbishop in Uganda is safeguarding Christ's Real Presence from being dishonored by banning the reception of Holy Communion in the hand.

In a decree issued on Saturday, Abp. Cyprian Kizito Lwanga of Kampala told priests and laity that he's now making the practice illegal:

The archbishop also established additional norms on who can distribute and receive the Blessed Sacrament and ordered that his directives be immediately put into effect.

Lwanga becomes one of few bishops worldwide who have used their authority to ban the highly criticized practice. Bolivia's Bp. Krzysztof Białasik barred the liturgical custom from his diocese of Oruro in 2015. The bishop, appointed by Pope Benedict XVI in 2005, said distributing the Blessed Sacrament on the tongue reduces the chance of someone receiving the Eucharist and then walking away without consuming the consecrated Host.
The late Bp. Juan Rodolfo Laise of the diocese of San Luis, Argentina wrote the book Communion in the Hand: Documents and History in 1997 when he banned the practice in his diocese. His successors have likewise upheld his ban.
Bishop Athanasius Schneider of Astana, Kazakhstan has also been an outspoken critic of Communion in the hand. Speaking in 2015, Schneider said the practice causes a loss of faith in Christ's Real Presence.

"The exterior minimalistic gesture has a causal connection to the weakening or even loss of the faith in the Real Presence," explains the bishop.
It is forbidden to distribute or to receive Holy Communion in the hands.

Schneider also wrote a book highly critical of the practice called Dominus Est—It Is the Lord. Cardinal Albert Malcolm Ranjith, now archbishop of Colombo, Sri Lanka penned the book's preface while he was the former secretary for the Congregation of Divine Worship (CDW). In his reflection, Ranjith called for a careful review and possible abandonment of the practice.

I think it is now time to evaluate carefully the practice of Communion in the hand and, if necessary, to abandon what was actually never called for in the Vatican II document Sacrosanctum Concilium nor by the Council Fathers but was, in fact, "accepted" after it was introduced as an abuse in some countries.

In his decree on Saturday, Lwanga noted that universal Catholic Church law required that he be vigilant "to fend off abuses in the liturgical life of the Church." He further reinforced that canon 915 of the Catholic Code of Canon Law bars couples, who are living in sin, from receiving Holy Communion.

"Following the clear norms of Can. 915," wrote Lwanga, "it must be reaffirmed that those living in illicit marital cohabitation and those who persist in grave and manifest sin, cannot be admitted to Holy Communion."

Among the various norms laid out in the bishop's decree, laypeople — who did not receive an official mandate from the bishop to be an extraordinary minister of the Eucharist — were also forbidden from distributing Holy Communion.

Citing canon 929, the bishop further commanded that priests and deacons "celebrating and administering the Eucharist" are "to wear sacred vestments" as prescribed by liturgical rubrics.

Lwanga finished by saying his decrees were meant to fight against ever-growing liturgical abuses.