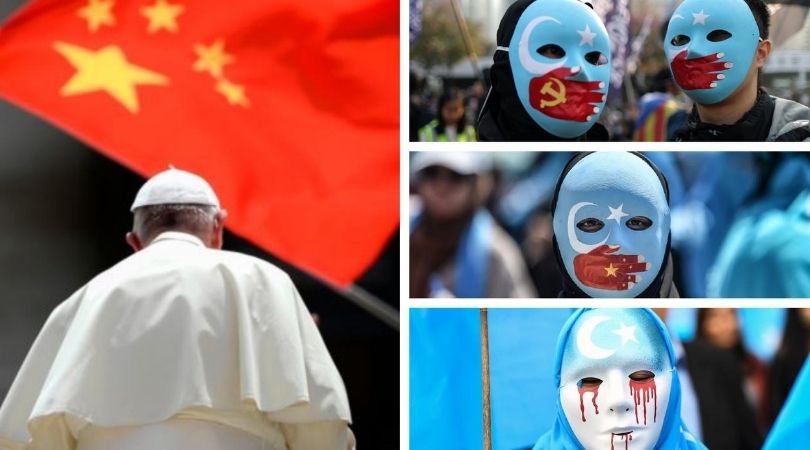 ROME (ChurchMilitant.com) - Pope Francis is being slammed for his silence on the genocide of Uighur Muslims after 76 religious leaders condemned China for a "holocaust" of its religious and ethnic minorities.

Two Asian cardinals, a British Catholic bishop and high-profile Catholic priests joined Orthodox, Anglican, Jewish and Muslim leaders in publishing a statement on Friday blasting China's persecution of Uighurs as "one of the most egregious human tragedies since the Holocaust."

Cardinal Charles Maung Bo, archbishop of Yangon, Myanmar and president of the Federation of Asian Bishops' Conferences (FABC) and Cdl. Ignatius Suharyo, archbishop of Jakarta, drew attention to "the potential genocide" of "one million Uighur and other Muslims in China."

The persecuted minority "are incarcerated in prison camps facing starvation, torture, murder, sexual violence, slave labor and forced organ extraction," and "at least 80% of Uighur women of childbearing age" are subjected to "forced sterilization and birth prevention," the statement said.

Global media and human rights activists noted the conspicuous silence of Pope Francis, Archbishop of Canterbury Justin Welby — a close friend of the pontiff's — as well as prominent Muslim leaders.

"Pope Francis, in particular, speaks almost every week at the Sunday Angelus, and on many other occasions, about issues of injustice in the world. He has often addressed the persecution of the Rohingya Muslims," Rahima Mahmut, UK director of the World Uighur Congress, told Church Militant.

"Yet there is one country whose human rights record he has not highlighted — China — and one people whose suffering he has not spoken about — the Uighurs," the human rights activist lamented.

"The Pope is one of the world's most influential and respected spiritual leaders, with a moral authority that can reach every corner of the globe," Mahmut observed.

There is one country whose human rights record he has not highlighted — China — and one people whose suffering he has not spoken about — the Uighurs.

"We look to Pope Francis to take a stand, to speak out and offer his prayers and solidarity for the Uighurs facing what amounts to among the worst atrocity crimes since the Holocaust," she urged.

"After the Holocaust, the world said, 'Never Again.' Today, we repeat those words 'Never Again,' all over again," the statement stressed. "We stand with the Uighurs. We also stand with Tibetan Buddhists, Falun Gong practitioners and Christians throughout China who face the worst crackdown on freedom of religion or belief since the Cultural Revolution."

In comments to Church Militant, Dr. Niall McCrae, a writer on Chinese affairs, pointed out that Pope Francis was "quick to support the Black Lives Matter protests after one instance of police brutality in the United States, but clearly Uighur Muslim lives don't matter."

"For Pope Francis, some social justice causes are more equal than others. Essentially, the pontiff is a progressive globalist who would prefer to criticize Western civilization than suggest anything wrong with Marxist China," McCrae, lecturer at Kings' College, London, said.

"We strongly suspect that Uighurs are being used for forced organ harvesting. This horrific practice began with Falun Gong practitioners, as proven by an independent people's tribunal in London last year," noted McCrae, co-author of Year of the Bat: Globalization, China and the Coronavirus.

Incarcerated Uighurs provide a lucrative supply of halal organs, serving a growing global demand. This partly explains why countries like Saudi Arabia have been reticent on human rights abuses in western China.

"Incarcerated Uighurs provide a lucrative supply of halal organs, serving a growing global demand. This partly explains why countries like Saudi Arabia have been reticent on human rights abuses in western China. The Pope cannot claim ignorance on these serious concerns," he stated.

Indian media World Is One News (WION) called out "the activist pope, who has a track record of being vocal about human rights," asking why "the most outspoken pope ever," who supports "the environment, poverty and LGBT campaigns" and who is a proponent of "interreligious dialogue," is silent.

"He is the only pope to visit the largely Islamic West Asia," WION reported. "In 2017, while delivering a speech in Myanmar, he demanded respect for the Rohingyas."

"The pope is bowing to China," WION alleged. "He has neither spoken about the Uighurs nor supported protests in Taiwan and Hong Kong."

Islamic scholar Robert Spencer told Church Militant that "the allegations that the Vatican is being paid a massive sum by the Chinese government could hold the key to why Pope Francis is silent on the persecution of Uighur Muslims."

"If they paid him, he might speak up on their behalf. But they do not, and the Chinese Communists do. His eye, in this case, appears to be squarely on the bottom line, not on the humanitarian concerns he speaks out about so enthusiastically in other contexts," the historian lamented.

In June, an Associated Press report confirmed that Uighur women were forced to undergo pregnancy checks and fitted with intrauterine devices or sterilized leading to a form of "demographic genocide."

The allegations that the Vatican is being paid a massive sum by the Chinese government could hold the key to why Pope Francis is silent on the persecution of Uighur Muslims.

The Chinese state was performing forced abortions on hundreds of thousands of women, and parents were interred in detention camps for having too many children unless they paid huge fines.

Such crimes against humanity in four Uighur-populated prefectures could elevate this action to the level of genocide, according to the 1948 Genocide Convention, the aforementioned religious leaders' statement asserted.

"Now, the world is looking to other major spiritual leaders for their response. Given the pope's worldwide moral authority, and given that Pope Francis in particular speaks out regularly on injustices around the world, we hope that he will add his voice," he said.

"As a 7-year-old Catholic, I do not easily criticise @Pontifex. As a former Anglican, I take no pleasure in querying @JustinWelby. But their silence leaves me no choice. I pray they will speak out — NOW," he tweeted.