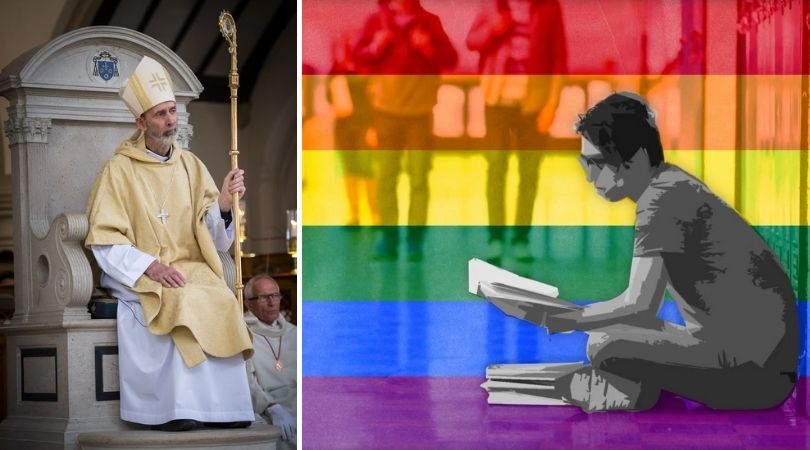 BRENTWOOD, England (ChurchMilitant.com) - An English bishop is refusing to discipline the headteacher of a prestigious Catholic school who is openly promoting pansexual propaganda in defiance of Church teaching.

Gemma Ackred, headteacher of St. Thomas More High School in the diocese of Brentwood, shocked local Catholics when she marked "LGBTIQ+ History Month" by publishing, for the school assembly, a prayer affirming gender confusion and homosexuality.

Ackred also announced that every subject taught at the school would have at least one lesson educating pupils on LGBTIQ+ issues.

In her weekly message for the first week of February, the headteacher quoted Pope Francis, claiming that the pontiff "has given a clear direction that he wants to see a strong emphasis on an inclusive Church."

The headteacher emphasized how Francis encouraged a homosexual couple to bring their three children to church weekly. She stated, "We draw strength and inspiration from the example of our pope in this regard."

It is heartbreaking to think of children being made to recite a 'prayer' that insults and offends God.

Stressing how she wanted St. Thomas More High School to be an "inclusive Catholic school" where "everyone is comfortable to be themselves," Ackred noted that archbishop of Westminster, Cdl. Vincent Nichols, asked parishes to welcome the LGBTQ+ community.

"In this month when we celebrate LGBTQ+ history, we acknowledge the past failings of our society, and we teach students about the contribution of the LGBTQ+ community (in terms of history) that has often been ignored or forgotten," Ackred wrote.

The headteacher also explained how the Catholic Church is changing its approach to LGBTQ+ people and, as such, how the school needed to "actively promote an understanding of the value and beauty of diversity and of our role as Catholic people" in treating everyone as "made in God's image and likeness."

In comments to Church Militant, popular English writer and deacon Nick Donnelly noted that "there is nothing more cruel and irresponsible than teachers presenting LGBT ideology as if it were God's revelation, seeking to mislead impressionable children under their care into thinking that God approves of homosexuality and gender confusion."

Ackred is presenting children with a gnostic version of creation by giving a paraphrase of Genesis 1:27.

Donnelly, author of A Catholic Survival Guide for Times of Emergency, elaborated:

Ackred is presenting children with a gnostic version of creation by giving a truncated paraphrase of Genesis 1:27, which states, "We are all created in God's image and likeness." In the context of promoting LGBT ideology, the headteacher appears to be telling children that God created individuals with homosexual inclinations.

The headteacher's paraphrase omits the divine truth expressed by Genesis 1:27–28, that human beings are created in the sexual complementarity of maleness and femaleness. What a true Catholic school would tell children is that Genesis 1:27–28 is the foundation for the Church teaching that homosexual acts are intrinsically disordered and contrary to the natural law because they close the sexual act to the gift of life (Catechism of the Catholic Church, 2357).

"It is heartbreaking to think of children being made to recite a 'prayer' that so insults and offends God. Surely, Bp. Williams must act," Donnelly urged.

Church Militant contacted the bishop of Brentwood, Alan Williams, asking if the headteacher would be disciplined and Catholic teaching on sexuality reinforced at the school.

Bishop Williams was also asked by Church Militant if the school is considering an apology for promoting pansexuality, including transgenderism — an ideology that the Holy Father has explicitly condemned in word and through his documents.

Janet Steele, the bishop's secretary, wrote back stating the bishop was away from the office. When pressed further, the bishop's staff said that Williams "has commitments elsewhere right through next week, but, hopefully, we will be able to get back to you before too long."

A source in the chancery told Church Militant that the bishop was present, but afraid to deal with the controversy. "Staff are scuttling around like headless chickens after your email arrived, not knowing how to respond," the source said.

Who am I to judge?

Williams, who was appointed bishop of Brentwood in 2014 by Pope Francis, earlier said he found it "difficult" to accept same-sex marriage — but added that the Catholic Church "certainly can't be judging anyone, and we certainly can't be nasty to people."

"I think it's very important not to pass judgment. After all, who am I to judge?" Fr. Williams added, just before his episcopal ordination.

Meanwhile, Catholic parents and a non-Catholic Christian with a leadership role in their community have protested the attempt to indoctrinate children with the LGBTIQ+ agenda, and at least one Catholic couple withdrew their son from the school for a week.

Sources told Church Militant that deputy headteacher Philip Maxfield justified the pro-LGBT letter by claiming that a group of queer boys in the school came up to him saying they felt visible and affirmed and that the LGBTQ+ letter made them feel welcome.

A top school source said that Ackred's appointment as headteacher had been controversial; she was rejected twice before being appointed in the third round (in late 2013) by the board of governors.

In 2020, Francis attacked gender theory, warning it had the "dangerous" aim of erasing all distinctions between male and female and would "destroy at its roots" God's most basic plan for human beings, specifically, "diversity [and] distinction," making everything homogenous.

A History of Heresy

Genesis 1:27–28 is the foundation for the teaching that homosexual acts are disordered.

Nichols has also authorized openly gay former Anglican priest David Cherry to be trained for the Catholic priesthood, even though Vatican directives caution against ordaining homosexuals. Cherry will be ordained deacon on March 1 by Bp. John Sherrington.

Brentwood diocese made news in May after Fr. Britto Belevendran, chair of the diocese's Interfaith Committee, displayed Hindu, Buddhist and African idols in front of the altar for a service marking Pope Francis' pan-religious day of prayer.

Church Militant earlier reported that Pope Francis reached out to homosexual couple Andrea Rubera and Dario De Gregorio, even though they were "married" in Canada in 2009 and had three children through surrogate mother Kerilyn (a lesbian).

The Italian couple arranged for Rubera's sperm to be used to create a daughter,  Artemisia. This was followed by De Gregorio's sperm being used to create twins, Chloe and Iacopo.

Italian law expressly prohibits medically assisted procreation, in order to protect children from being turned into commodities. The law is also designed to protect surrogate mothers from being exploited as a mere means to an end.