Charlie Gard May Have Second Chance at Life

LONDON (ChurchMilitant.com) - After weeks of international pressure, the British hospital that's been fighting to remove the life support of 11-month-old Charlie Gard is now requesting that Europe's High Court reconsider his case.

In a statement released on Friday, Great Ormond Street Hospital (GOSH) said, "Two international hospitals and their researchers have communicated to us as late as the last 24 hours that they have fresh evidence about their proposed experimental treatment."

"And we believe, in common with Charlie's parents, it is right to explore this evidence," it continued, reversing itself after a legal battle to permit the hospital to end Charlie's life.

As Church Militant reported on Wednesday, both Pope Francis and President Donald Trump have raised their voices on behalf of Charlie and his parents, Connie Yates and Chris Gard. His parents have been battling GOSH in the U.K. courts for permission to bring Charlie to the U.S. for experimental treatment.

Pope Francis reversed a statement put out by the Vatican's Abp. Vincenzo Paglia of the Pontifical Academy for Life (the same Abp. Paglia who commissioned a homoerotic mural and defended the appointment of pro-abortion members to the dicastery). The Holy Father's statement said he was "following with affection and sadness the case of little Charlie Gard and expresses his closeness to his parents. For this, he prays that their wish to accompany and treat their child until the end is not neglected."

In response to Pope Francis' statement, Mariella Enoc, president of the Bambino Gesu Pediatric Hospital in Rome, requested that Gard be transferred to their facility.

On Monday, President Trump tweeted the following: "If we can help little #CharlieGard, as per our friends in the U.K. and the Pope, we would be delighted to do so."

Charlie, who suffers from mitochondrial syndrome, an extremely rare genetic disease, was taken to the hospital at eight weeks old. Charlie is the 16th reported case of the disease 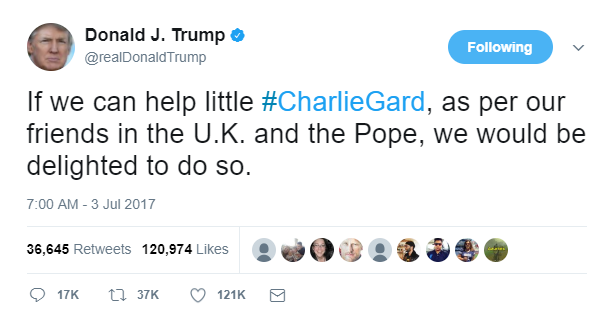 worldwide. His parents wanted to bring their son to the United States to receive what is called nucleoside bypass therapy, an experimental treatment taken as an oral medication.

Great Ormond Street Hospital took the parents to court over the hospital's desire to withdraw Charlie's life support. The hospital argued that the therapy in the United States would not help. They also said that the treatment "would take time," according to Katie Gollop who was speaking on behalf of the hospital "and over the weeks and months, Charlie would be forced to remain in his perilous condition — he can't see, can't hear, can't cry, can't swallow. He has a mechanism that causes his lungs to go up and down. We don't know whether he suffers pain."

We just can't let our baby die when there is something that might help him! We won't give up on him because he has a rare disease. He deserves a chance, and he deserves a life as much as anyone else. We understand that rare diseases don't get enough funding for research but why should that be a reason for a child to die? He's here now, and this could help our baby.

In April, a High Court judge, Mr. Justice Francis, ruled against the parents, saying that Charlie's artificial ventilation should be withdrawn and Charlie allowed to "die with dignity." The ruling was appealed, and in May the U.K. Supreme Court upheld the lower court's decision.

On June 27, the European Court upheld the ruling of the U.K. courts, ordering that Charlie's life support be removed.

Watch
A Dishonest Way to Frame the Debate
By Christine Niles   •   0
Watch
Pope Francis: ‘No Room’ for Homosexuality in Priesthood or Religious Life
By Stephen Wynne   •   0