Update: The Archdiocese of Southwark has issued an official statement to ChurchMilitant.com with regard to Fr. Steven Fisher. The full statement can be read here.

BLACKFEN, July 17, 2015 (ChurchMilitant.com) - A priest in the United Kingdom who was once a vocal proponent of the Traditional Latin Mass has resigned from his post and is leading what now seems to be an openly homosexual lifestyle.

Father Steven Fisher of the archdiocese of Southwark announced his resignation in a tweet Saturday, and shortly afterwards changed his Facebook avatar to show a gay pride rainbow flag superimposed over a cat, while making sexually suggestive remarks with his gay friends on social media.

A recent avatar shows an image of chains being broken. Beneath it a friend remarks, "Like the new picture. Breaking away from the old ways." Fisher responds with a simple "Aye." 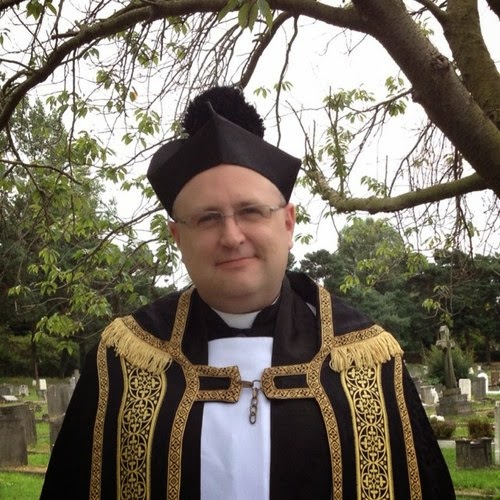 Father Fisher had been a vocal proponent of the Traditional Latin Mass only a few years ago, offering Masses for the Latin Mass Society of England and Wales, as well as starting up Masses in the Ancient Rite in two different parishes.

Back in 2008 he wrote a letter to popular American priest Fr. John Zuhlsdorf, a well-known proponent of the Traditional liturgy, talking about the Mass he had started up in Ramsgate, which has now become a shrine where the Traditional liturgy is regularly offered. "We are delighted to be regularly offering Mass in a form that would have been, in its essentials, the same as that offered by Saint Augustine when he arrived on these shores," Fisher wrote.

And in 2009 he was quoted in The Telegraph as saying, "I've been saying it [Traditional Latin Mass] weekly since before Summorum Pontificum."

He seemed therefore the natural replacement for former pastor Timothy Finigan, who had served at Our Lady of the Rosary in Blackfen for 17 years, making it a widely known haven for the Traditional liturgy. The replacement was announced in May 2014, and Fr. Fisher arrived to Blackfen on September 3 of that year.

But his arrival was followed by a swift and marked change in parish life. Within one day, the setting for Holy Benediction changed, from an ornate and beautifully set altar to a simple, pared-down design. Taped to the altar itself was a note from Fisher stating that from now on this would be the arrangement for Benediction and no one was to touch it. Additionally, he stopped offering it in Latin and switched to English.

Although Fisher had assured parishioners in an online comment in the summer before his installment that there would be no changes to the Mass schedule, within two days of his arrival he got rid of all Masses in the Extraordinary Form on feast days. Parishioners offered to have visiting priests come to offer such Masses, but Fisher refused.

During his first Sunday Mass, he informed families that weren't within parish boundaries that they did not properly belong at Our Lady of the Rosary, and that they should return to their regular parish. Most of these families attended for the Traditional liturgy; they were gone within two weeks.

One parishioner who spoke with us helped run the homeschooling group that regularly met on parish property, and said Fisher showed hostility towards the group. Making his disapproval clear, he told her he believed government schools and not parents should be the primary educators of children. Additionally, The Tablet, a heterodox Catholic magazine, started appearing on the back table of the church.

And a bizarre incident only weeks into Fisher's arrival caused a number of parish members to leave. An eyewitness recounts that during his first Sunday Traditional Latin Mass, after the faithful recited the Domine, non sum dignus, Fisher interrupted the liturgy and — still holding up the consecrated Host — informed those present that he had received e-mails from parishioners complaining that they'd be forced to kneel and receive Holy Communion on the tongue. He told the parish — incorrectly — that canon law permits the faithful to receive standing and in the hand at the Extraordinary Form Mass. His speech lasted approximately two minutes, after which he resumed the Mass.

Criticism of Fisher's conduct reached British journalist Damian Thompson, who issued a tweet wondering why priests felt the need to make changes to the Traditional Latin Mass. Fisher was enraged on hearing this, and the following Saturday announced at Mass that he was shocked to have been denounced by parishioners to the media and went on to accuse those who had done so of committing a "mortal sin" — a false statement.

He also said henceforth he would suspend the Traditional Latin Mass altogether. Parishioners lodged complaints with the archdiocese — and received a tepid response from Abp. Peter Smith:

Thank you for your letter of the 21st September in respect of the suspension of the Mass in the Extraordinary Form in Blackfen Parish, which I received on the 25th September.

As you will know, the parish priest is responsible for the common good of all his parishioners in terms of their sacramental and pastoral care. People who come from outside the parish to participate in the celebration of the Eucharist are always welcome, but it is the welfare of the stable community of parishioners who must always be the first concern of the parish priest. My understanding is that Fr. Fisher has suspended the celebration of the Mass in the Extraordinary Form until he has had an opportunity to consult the new parish council and through that body, the parishioners. That is his right and responsibility and he will fulfil that over the next month or two as he settles in and gets to know his flock. I also understand a final decision will not be made until the end of the year.

With an assurance of my prayers for you all,

The parish council, headed by the faction hostile to the Usus antiquior, won the day, and the final decision was made to end the Traditional Latin Mass entirely. Thus ended the Mass's successful seven-year run in Blackfen.

Thompson devoted more commentary to the situation in Blackfen, this time in an article in The Spectator.

Meanwhile, what about Catholics who are not "one of us"? You can't get further from the Magic Circle than the parishioners of Our Lady of the Rosary, in Blackfen, Kent. The previous parish priest, Fr. Tim Finigan, is a traditionalist who celebrated the Tridentine Latin Mass on Sundays — but also the New Mass, in strict conformity with rules laid down by Pope Benedict XVI. No sooner had he left earlier this year than the new PP, Fr. Steven Fisher, cancelled the traditional services. Fr. Fisher has the backing of his boss, Archbishop Peter Smith, but it's a decision that has caused terrible distress to traditional Catholics for whom the old Mass at Blackfen was the centre of their spiritual lives. Now, you could argue that an incoming pastor is entitled to change — gently — the way things are done in his parish; but in this case the new man, having apparently concluded that the traddies were "divisive," has effected change in a brutal fashion that has left his flock truly divided. More of a Cromwell than a Fisher, you might say.

Long before Fr. Fisher's arrival in Blackfen, inside sources that spoke with ChurchMilitant.com say there existed concern in traditional circles over his sexual orientation. After Fisher's time at Ramsgate, he seems to have suffered a breakdown, and fell off the radar for a time. When he re-emerged, he seemed a different person, associating himself with open homosexuals.

Sources say Fisher is en route out of the priesthood. Currently he teaches at St. John's Comprehensive Catholic School, an archdiocesan school.

ChurchMilitant.com reached out to the archdiocese of Southwark for comments — specifically asking if it was troubled by the knowledge that one of its priests who seems to be leading a lifestyle in direct opposition to the Church is teaching children in one of its schools. A phone call this morning to the private secretary to the archbishop confirmed he had received the e-mail. But as of press time, we've received no response.

Editor's note, July 18, 2015: This article has been updated with new information.