She called him out for pushing heterodox ideas; he told her he'd sue for defamation

A priest in the United Kingdom has threatened to sue a blogger after being called out for his apparent endorsement of heterodox theology. 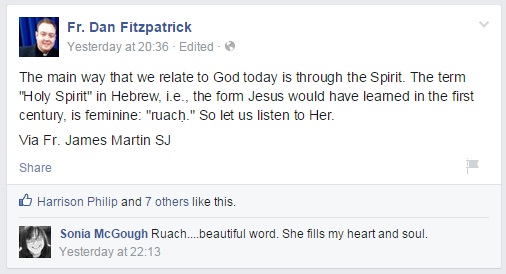 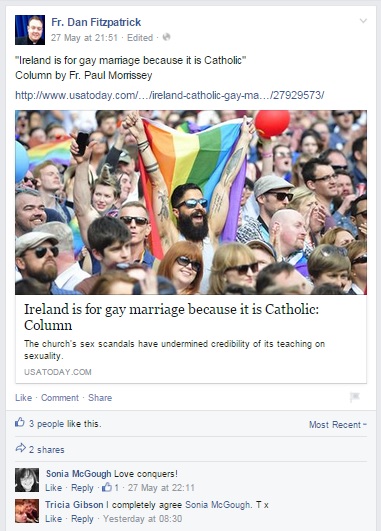 The blogger, Clare Short of the blog Faith in our Families, then called him out.

"So here you have a young guy ... and he is being led astray by the nonsense of a much older and more experienced priest — whom I'm sure he trusts," she wrote. "It kills me to see priests go astray like this — especially young priests. I pray and fast too much for priests to let them throw themselves into Satan's arms like this."

She was soon threatened with a lawsuit by Fr. Fitzpatrick for two allegedly defamatory statements. He didn't indicate what the statements were, however, and later claimed she deleted them. 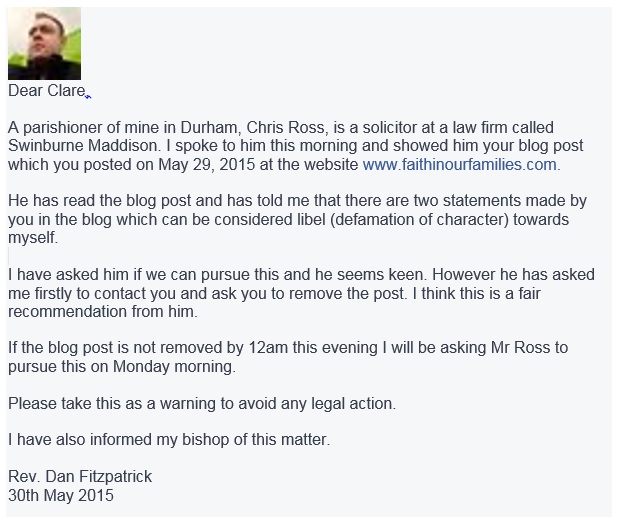 Short says she then sent the priest a message: "Would you like to tell me the 2 statements that cause you upset? I would be happy to rephrase anything that is not correct." She received the following reply.

According to Short, though, his story is completely false.

"Edited out some of the abusive comments??! I did nothing of the sort! The truth is that there were no abusive comments to begin with," she wrote on her blog. Hence, she sent yet another message to the priest. "Again, if you tell me exactly what 2 statements are bothering you, I am happy to rephrase them," she insisted. "From a legal point of view, because I have offered to amend any offending statements, the problem can be resolved and there is no reason to take the matter further." 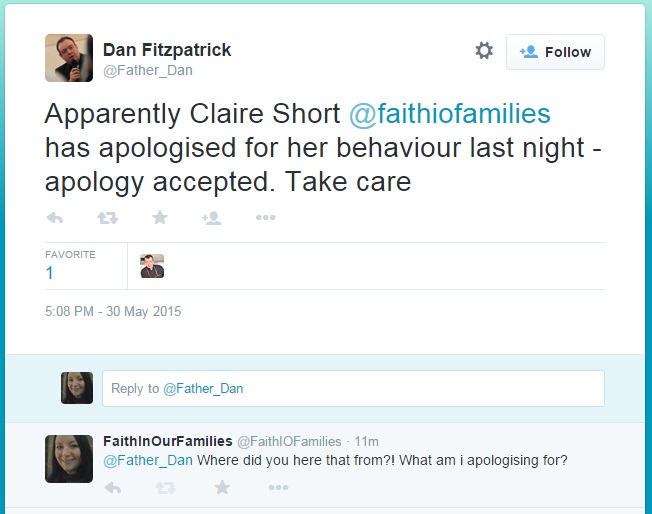 The problem? Apparently the thing Fr. Fitzpatrick claims Clare did, she did not in fact do at all, as is evident from her tweeted reply and her blog. "I'm afraid to tell you that I did no such thing. This is a bare-faced lie from Fr. Dan, obviously trying to close down the whole affair because he realizes by this point that I am not one to be scared off by threats or bullying." She continued, asking, "Has everyone seen this alleged apology except me?! Can anyone tell me what I apologized for?!"

Keeping with the narrative, though, as if oblivious of her ever denying his framing of the dispute, Fr. Fitzpatrick later tweeted:

Clare, baffled by the words of the priest, began demanding evidence of the offensive comments that she was accused of making — and of which Fr. Fitzpatrick had claimed to have proof. She said he can't produce evidence because such comments never existed. She proceeded to welcome any lawsuit Fr. Fitzpatrick would throw her way.

He's now backed down from his threats to sue, though, and he's deleted all his social media posts involved in the incident.

In a public statement, he admitted to making a mistake in his endorsement of Fr. Martin's ridiculous reference to the Holy Spirit as "Her." Following that, he defended his post about Ireland's "gay marriage" referendum by maintaining he was only sharing the article, not professing agreement with its contents. The rest of his statement is a list of excuses for his prior behavior. He makes no retraction of his accusation that Clare defamed him and then covered up the evidence of it. In fact, he repeats the charge.

Church Militant has contacted Fr. Fitzpatrick requesting the evidence he claimed to possess of Clare's defamatory remarks — or at least clarification on his side of the story. As of publication time, he has yet to respond to our request.