NOTTINGHAM, U.K. (ChurchMilitant.com) - Pro-life students at Nottingham University in the United Kingdom have won a resounding victory after the Students' Union (NUSU) reversed its decision to deny the group affiliation. The sudden volte-face follows the threat of legal action and weeks of hostility and discrimination against the pro-lifers by NUSU officers.

NUSU rejected an application for affiliation from Nottingham Students for Life (NSFL) on May 30, stating that the pro-life group's aims "go against" NUSU policy, in particular "abortion reform in Northern Ireland," "Repeal the Eighth" in Ireland and the Equal Opportunities Guidance Document.

The e-mail rejecting the application, sent to pro-lifers on June 5, also mentioned that a previous attempt by a pro-life student group seeking affiliation in 2010 was unsuccessful. It also rejected affiliation on the grounds that NSFL would "become a 'Campaign Group' as opposed to an affiliated society."

It further asserted that the pro-life body "did not align with NUSU values" or with "the overall current student viewpoint."

Unaffiliated student bodies do not receive funding, have limited access to campus facilities and cannot advertise or recruit members at student Freshers' Fairs (an event at the start of the school year for incoming freshmen).

NUSU's e-mail advised that the pro-lifers could appeal to NUSU Societies Council if they wished to overturn this decision.

Hours before the Societies Council meeting on June 11, however, a number of NUSU student officers attacked the pro-lifers on social media, urging a vote to deny the group affiliation, and rallying pro-abortion protestors to intimidate the pro-lifers.

The protest organized by SU members was quite threatening.

"As representatives of a body of 34,000 students, you are here to represent ALL students," she challenged pro-abortion SU officers on Facebook. 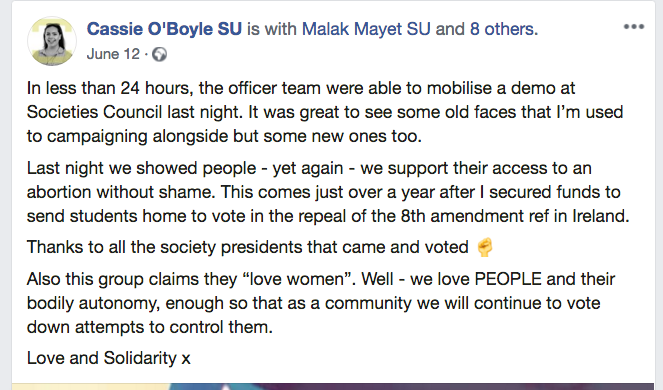 NUSU Equal Opportunities and Welfare Officer, Myles Smith-Thompson, openly flouted his pro-abortion bias on Facebook, noting, "As political leaders of the union, the officers do not have to be impartial on issues that affect students."

"It was shocking to see student officers who are supposed to be representing us, openly protesting against us," said Rynkiewicz. "At the meeting our appeal was rejected by a majority and even met with a round of applause. Everyone had made up their minds before coming and whatever we said we knew was going to go down like a lead balloon."

Sinclairs Law, representing the pro-lifers, noted that student officers, including Education Officer, Equal Opportunities and Welfare Officer, Postgraduate Officer and Community Officer, were among those who organized the protest.

Education Officer Cassie O'Boyle conceded on Facebook: "In less than 24 hours, the officer team were able to mobilise a demo at Societies Council last night. … Last night we showed people — yet again — we support their access to an abortion without shame."

O'Boyle further confessed to securing funds to send students home to vote in the repeal of the Eighth Amendment referendum in Ireland. 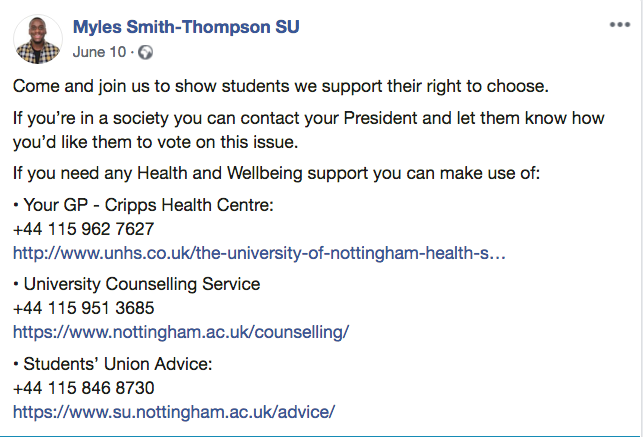 At the meeting, NUSU officers stood outside the room in which the meeting was being held handing out leaflets saying: "Your body, your choice" on one side, and "Your vote, your choice. Your SU Officers support the right to free, safe and legal abortions" on the other, with leaflets displaying NUSU branding. The leaflets were presumably printed with NUSU funds/resources.

NUSU officers and students also held banners containing slogans such as "You do u-terus," "Don't tell me what to do," and "Get in the bin" in an effort to encourage members of the Societies Council to vote against the appeal of the pro-life group.

Pro-lifers, given one minute to present their case at the meeting, argued that "the role of the SU is not to agree with the views of each society, but to respect these views," and that "the Equal Opportunities Policy, which ironically has been used against us by the committee, states that the SU should act without discrimination in respect of religion or belief; hence it would be unfair to discriminate against this society solely because of our belief that life begins at conception."

NUSU's Societies Council Committee followed this with their own submission, arguing that as NUSU had passed policies on the abortion referendum in the Republic of Ireland and the abortion law in Northern Ireland, these were taken to represent the values of the majority of students.

The pro-lifers lost the vote as 98 voted against the appeal for affiliation and 42 voted in favor. NUSU has more than 200 student-led societies.

Rynkiewicz said that a number of student presidents representing other student associations told her after the meeting: "We disagree with your position but we can see that the manner in which you have been treated is clearly unfair."

"Our client's members hold a protected belief or philosophy, in that they believe life begins at conception, which is set out in the NSFL constitution," Sinclairs Law pointed out. "There is ample case law to support the position that this philosophical belief is ‘protected characteristic' under the Act."

"In this context, NUSU cannot discriminate against groups of members. It has no choice but to comply with the Act," the legal firm stated. "Furthermore, regardless of what the 'majority of students' viewpoint may be, Equality legislation is primarily intended to defend and protect minorities."

Even though the NSFL constitution does not mention religious belief, at least 70% of NSFL members are Catholic, while around 30% are Evangelical.

NSFL's lawyers threatened to initiate legal action if NUSU did not respond by 5 p.m. on July 19.

Around noon on July 19, NUSU officer Angela Lee emailed Julia Rynkiewicz: "Congratulations on being elected to the role of President for Students for Life."

Rynkiewicz said in a statement:

Our pleas to the Students' Union to ensure a respectful and tolerant environment for all students had fallen on deaf ears, and it is regrettable that it took the threat of legal action in order for the Union to take its legal obligations seriously. We are delighted to have now received affiliation, and we look forward to engaging the student body on this important issue in a respectful and positive manner.

Laurence Wilkinson, Legal Counsel for AFD International, who also supported the pro-lifers, told Church Militant that as a Nottingham graduate himself, "it was deeply unsettling to see student officers at my former University treat the society members unfairly and, in my view, with contempt."

"Thankfully, the law is absolutely clear that you cannot discriminate against pro-life groups and refuse to affiliate them because of their beliefs," he added. "I certainly hope Students' Unions across the country will start taking their legal obligations seriously."

"If we aren't capable of having uncomfortable conversations at university, what hope is there for wider society?" he asked.

In the last 10 months, student unions at Glasgow University, Strathclyde University and Aberdeen University have all had to reverse their decisions to refuse affiliation to pro-life groups after the groups raised the prospect of legal proceedings.

Glasgow University, Strathclyde University and Aberdeen University have all had to reverse their decisions to refuse affiliation to pro-life groups.

Church Militant contacted NUSU's Angela Lee for comment but did not receive a response.

NUSU has published a statement on the matter on its website: "Following an internal review relating to the affiliation of societies, gaps were found in our procedures and processes and we are taking immediate action to resolve and improve these. Following this review, Nottingham Students for Life has now been affiliated as a Students' Union society."