SAN FRANCISCO, July 16, 2015 (Justin Petrisek) - The Jesuit president of the University of San Francisco (USF) has removed the University's controversial social media post celebrating the Supreme Court's marriage ruling last month, and he assured The Cardinal Newman Society that USF supports Catholic teaching on marriage — a position, however, that contradicts a long history of LGBT activism at USF that has included advocacy for same-sex marriage and honors for its leading proponents.

On Friday, June 26 — the same day as the Supreme Court's 5–4 ruling in Obergefell v. Hodges — the University of San Francisco sent out a message celebrating the decision, as previously reported by the Newman Society. The tweet, which was originally distributed by the University’s Leo T. McCarthy Center for Public Service and the Common Good, was then retweeted on the official USF Twitter account.

The message read in full: 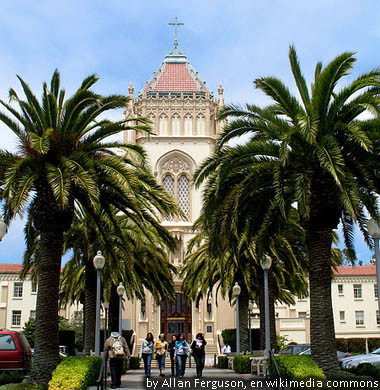 The hashtag "SFPride" was used in reference to the San Francisco Pride Celebration and Parade which followed the Supreme Court decision on June 27 and 28 and, according to pictures posted by the University, included USF students sporting t-shirts and stickers with the University logo. The USF mascot also made an appearance at the Pride Parade.

The University removed the post as of Friday, July 10, following multiple communications from the Newman Society. Father Paul Fitzgerald, S.J., who became president last August, has explained to the Newman Society that the initial social media posting was inappropriate and was posted in error by an inexperienced staff member. He also said that the University’s official position supports the Church’s teaching that marriage must be between one man and one woman.

While the university deeply respects and promotes the innate dignity of all gay and lesbian students, faculty, staff, and alumni as they are created in the image and likeness of God, it does not endorse views on marriage that are inconsistent with the teaching of the Church.

The university regrets any misunderstanding caused by the erroneous post and will provide closer oversight over posts on official social media platforms in the future.

However, the Newman Society has found another tweet that has not been taken down by the University, despite seeming to align USF with LGBT activists and the recent Supreme Court ruling. The tweet on the University’s official account states:

The Newman Society asked USF if Fr. Fitzgerald's statement on traditional marriage represents a new position for the University — given its history of hosting LGBT activism and honoring public leaders who support same-sex marriage — and whether other social media posts would be removed.Anne-Marie Devine, the University’s senior director of media relations, declined to comment further.

Referencing the statement from Fr. Fitzgerald, Devine said that the "information in the message sent on Friday is the final statement on this matter. Moving forward, we are educating our colleagues more fully on Church teaching and understanding, as well as reviewing policies and procedures of what is posted on social media."

In the past, the Newman Society has reported instances of USF honoring and providing platforms to same-sex marriage advocates. Last spring, USF granted an honorary degree to Norman Mineta, a past U.S. transportation secretary, congressman, cosponsor of the Freedom of Choice Act (FOCA) and reportedly one of the first elected officials to publicly support same-sex marriage. And the USF School of Law presented an honorary degree to its commencement speaker, the Honorable John Roos, a former United States ambassador to Japan and a public supporter of same-sex marriage.

The prior year, the University chose USF alumna and San Francisco Supervisor London Breed to speak at its winter commencement ceremony, despite her support for same-sex marriage: "I opposed California’s Proposition 8, and spend a considerable amount of personal time communicating to voters in the African American community why this proposition must be defended," boasted Breed in a candidate survey. "My Pastor, Rev. Amos Brown and I met with members of the African American Community to make it clear that we both support marriage equality."

In 2012, the Jesuit university hosted an array of scandalous commencement speakers, including Mayor of San Francisco Edwin Lee, Congressman Lynn Woolsey and Justice Goodwin Liu, an associate justice of the Supreme Court of California — all publicly in support of same-sex marriage. Woolsey received an honorary degree. Liu was infamously nominated to the Ninth Circuit Court of Appeals in 2011 by President Obama, but the Senate rejected the nomination because of the extreme nature of Liu's views.

For the University's 100th anniversary of its law school in 2012, it also invited Boies to a convocation ceremony with Robert F. Kennedy Jr., who helped produce a video for the “New Yorkers for Marriage Equality" project in which he said traditional marriage laws are “the last vestige of institutionalized bigotry that’s left in this country.”

In 2010, USF hosted "The Future of Same-Sex Marriage" Symposium, dominated by activist attorneys for LGBT causes and advocates of marriage redefinition including Brad Sears, director of The Charles R. Williams Institute on Sexual Orientation Law and Public Policy at UCLA and Molly McKay, media director for Marriage Equality USA.

The Newman Society has reported many other concerns at USF related to LGBT issues. In 2011, a USF theology professor and a USF campus ministry leader publicly charged the Church with being "homophobic" and touted the University’s employee benefits for same-sex couples. Student activities have included a University-sponsored LGBT Community Celebration at a basketball game, LGBTQ t-shirts for the San Francisco Pride Parade, a University-sponsored film festival promoting abortion and same-sex relationships, and annual Lavender graduations.

The Catechism of the Catholic Church teaches that same-sex attracted persons are "called to chastity" and "must be accepted with respect, compassion, and sensitivity." The Catechism further explains that marriage is designed for one man and one woman and that "homosexual acts are intrinsically disordered” as they are "contrary to the natural law" and "close the sexual act to the gift of life." Furthermore, "[t]hey do not proceed from a genuine affective and sexual complementarity. Under no circumstances can they be approved."