US Bishops’ Agency Funds Groups Calling for the Killing of Cops, Rebellion and Rioting 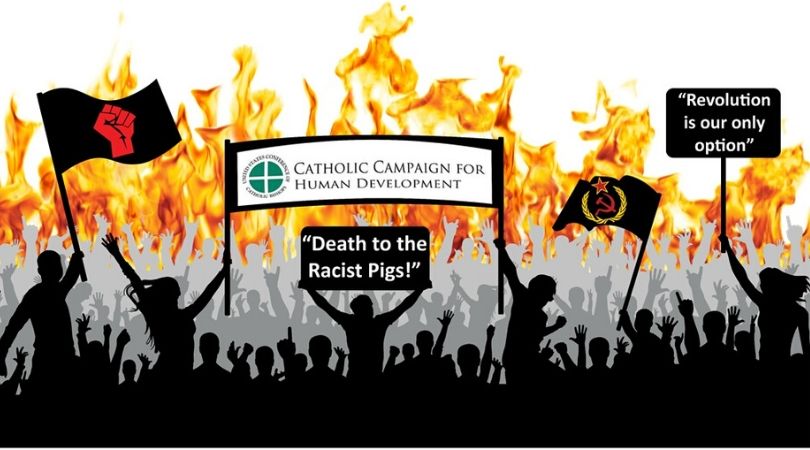 Charity in cahoots with radicals

The United States Conference of Catholic Bishops, through the Catholic Campaign for Human Development (CCHD), is funding organizations actively involved in calls for revolution, the killing of police officers and the defunding of police departments.

All of this follows a long and sordid history of the CCHD providing millions of dollars to organizations that have long served as communist front groups, waiting for the right time to spark a Marxist revolution. See our article titled "The Marxist Core of the Catholic Campaign for Human Development."

The targeted violence against police officers is being fueled by incendiary rhetoric provided by community-organizing groups grounded in the tenets of Marxist revolutionary tactics.

The New Orleans Workers' Center for Racial Justice (NOWCRJ) received $150,000 from the CCHD over the last three years, including last year's grant of $50,000 (see link, page 10). On May 30, NOWCRJ posted on Twitter video of a protest they were participating in, chanting about police, "Death to the racist pigs."

It should be noted that the logo for NOWCRJ is the clenched fist, which is a hallmark of Marxist revolution.

On May 29, NOWCRJ posted a tweet voicing "solidarity" with the violent protests in Minneapolis, stating, "Revolution is our only option at this point," and "To Rebel is Justified."

NOWCRJ also called on the police to be defunded by retweeting this image on June 9:

Since 2015, The Workers' Center of Central New York received $200,000 from the CCHD, including a $70,000 grant in CCHD's last published grant-cycle (see link, page 3). As with NOWCRJ, the Workers' Center also has the clenched fist as its logo. On May 29, this Catholic-funded organization gave full-throated support for rioting and looting on Facebook, saying:

"These riots and lootings are taking back what the masses of working black and brown communities are owed. Riots and protests are necessary tools and we fully support. ... Black communities fighting against the continued injustices they face. ... An injury to one is a (sic) injury to all" (emphasis added).

The Workers' Center also joined in protest and explicitly called for the defunding of police, as seen in this photo posted on the group's Facebook feed from June 6:

In this post from June 5, the Workers' Center (with the abbreviation WCCNY, seen on the far left) created a sign calling for the defunding of the police, and included on the sign "DSA," which stands for the Democratic Socialists of America. In other words, it is clear that the Workers' Center is collaborating with a publicly Marxist organization for the defunding of the police.

The People's Lobby Education Institute received $165,000 from the CCHD over the last three years, including last year's grant for $50,000 (see link, page 5). On May 30, The People's Lobby tweeted a call to defund prisons using inflammatory rhetoric against police officers, saying, "No Justice, No Peace, No Racist Police."

On June 4, The People's Lobby officially called for a defunding of the Chicago Police Department while dehumanizing police officers by depicting them as pigs.

On June 5, the People's Lobby demanded a defunding of the Chicago Police Department, the release of violent protesters that had been arrested and for the Chicago police to immediately stand down, ostensibly so that vandalism and looting would be easier.