US Bishops Slam Austen Ivereigh Over ‘False and Misleading’ Book

The U.S. bishops are blasting a book recently published by left-leaning British author Austen Ivereigh, which they claim mischaracterizes their stance towards the pope.

A statement issued Thursday by the chief communications officer for the U.S. Conference of Catholic Bishops (USCCB) claims that Ivereigh's book Wounded Shepherd: Pope Francis and His Struggle to Convert the Catholic Church "perpetuates an unfortunate and inaccurate myth that the Holy Father finds resistance among the leadership and staff of the U.S. Bishops Conference."

"The author disparages the General Secretary and a consultant to the Committee on Canonical Affairs particularly by suggesting they drew up documents in October that were then deliberately excluded from Rome," the statement continues. "This is false and misleading."

This is false and misleading.

The episode in question refers to the USCCB's fall assembly in Baltimore, Maryland last year, where the bishops — after months of disturbing revelations regarding sex abuse cover-up, starting with Theodore McCarrick and continuing with the Pennsylvania grand jury report and Abp. Carlo Maria Viganò's testimony, among others — had convened in November in the hopes of voting on sex abuse reform.

The clamor of the public — both Catholic and secular — had grown to a deafening pitch, with pledges from all corners of the country to stop giving to the Church, outraged missives sent to local bishops and a number of formerly diffident Catholics "red-pilled" and ready to fight for reform. A thousand Catholics showed up at the Silence Stops Now rally, directly across the way from the Baltimore Marriott Waterfront Hotel where the bishops were meeting, to demand an end to the silence, cover-up and corruption.

The bishops knew they had to take action — or at least give the appearance of taking action.

Their hopes, however, were swiftly undercut by Pope Francis on the first day of the fall assembly, as USCCB President Cdl. Daniel DiNardo announced at the outset — to the audible gasp of bishops present — that the pontiff had ordered that the vote not take place before the Holy See could address the matter itself and determine its own reforms — ostensibly to be made at Rome's February sex abuse summit.

Their hopes were swiftly undercut by Pope Francis on the first day of the fall assembly.

The fall assembly's raison d'être eliminated, the bishops proceeded to discuss other matters, winding up in the end with a single document on racism.

As to McCarrick — the catalyst that launched the Summer of Shame and burst open the long-festering wound of clerical silence and corruption surrounding his crimes — his name was barely mentioned at the fall assembly, while the Vatican's "investigation" into the circle of complicit bishops protecting the serial sexual predator remains in limbo, and largely forgotten.

As observers noted, the February "sex summit" — a mere three days, as opposed to the Amazon Synod's three weeks — came and went, also with little accomplished. Chicago's Cdl. Blase Cupich, known for his leftist bent, and voted the worst bishop in the United States, quickly became the pope's man in Rome, leading the sex summit and deftly avoiding any discussion of homosexuality and its link to the priestly abuse crisis.

The final results of the summit were the position the Church has essentially always taken: On matters of sex abuse, let the bishops investigate themselves.

Pope Francis eventually issued Vos Estis Lux Mundi, a set of guidelines to investigate bishops — measures criticized for falling short of full transparency and accountability, leaving the investigation to the metropolitan archbishop and the final determination to the Holy See itself — hardly trusted by the public in light of Viganò's testimony (corroborated by Msgr. Anthony Figueiredo's correspondence) that Pope Francis knew about penalties imposed on McCarrick by Pope Benedict but rehabilitated the accused homosexual predator.

Ivereigh argues in his book that the bishops' proposals last fall were an "attempt to carry out an ecclesiastical power play against the Pope, in what was in effect a quick-fix solution attempting to shore up the US bishops’ reputations," according to The Tablet.

"Cardinal DiNardo's decision to delay the vote on these proposals in November of 2018 is a clear sign of his and his brother bishops' collaboration with and obedience to the Holy Father," the statement continues, insisting on DiNardo's fidelity by closing with the reminder that he had praised and supported the pope's Vos Estis.

In comments to The Tablet, Ivereigh said the USCCB's remarks are "a defensive statement that doesn't in any way dispute the facts on which my account relies, while seeking to give an alternative interpretation of that account."

"The statement offers an account of how the USCCB executive saw the process, but in Rome — as my account shows — they viewed it very differently," Ivereigh said.

"They felt obliged to ask DiNardo not to proceed with the vote, pointing out that the USCCB could not simply go its own way and ignore the universal law of the Church," said the British journalist, relying on a "furious letter" penned by Cdl. Marc Ouellet on behalf of Secretary of State Cdl. Pietro Parolin to DiNardo that reportedly saw the bishops as attempting to foist new measures on the Holy See without the Holy See's input.

Ivereigh came under heavy fire for tweeting that Jesus may have been a homosexual.

Ivereigh's book was given prominent play by being featured on the Vatican News' website in October. He's been criticized by faithful Catholics for attempting to "reframe" the narrative around Pope Francis, characterizing him as a "merciful," "compassionate," "welcoming" pontiff while blasting his critics as unmerciful, unkind, rigid and closed off.

Ivereigh came under heavy fire earlier this year for tweeting that Jesus may have been a homosexual.

"Why do you say our Lord had no homosexual tendencies?" he tweeted in February. "By what signs or gestures do you deduce this?"

The tweet led to backlash from numerous Catholics, including Fr. Jacob Straub, who wrote: "This is very scandalous and possibly a heresy. You need to remove this tweet and confess your sin. Lord, have mercy." 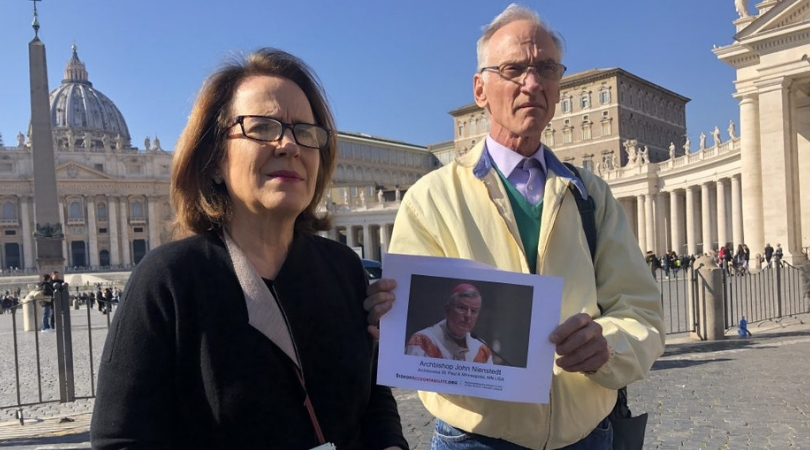