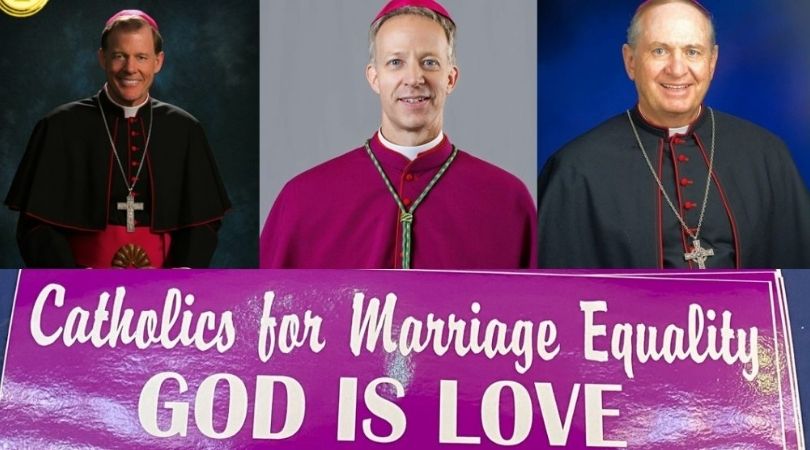 The following clarification was issued by the Lepanto Institute:

CORRECTION: Bp. William Wack provided a video presentation to the AUSCP Assembly, but did not attend in person. In a statement he issued today, Bp. Wack indicated that in his presentation:

"There was no mention of same-sex marriage or anything contrary to Church teachings, that's for sure. I hardly think that it is a scandal when a bishop talks to priests about holiness and the need to reform our lives."

Bp. Wack also indicated that the rainbow blanket he donned for that picture was posted on the internet by him 12 years ago after it was given to him by hospice workers. He wrote:

It was from another convention — the Catholic Daughters of the Americas convention in Houston (I believe). After my talk to the young people about Mary and the saints, they presented me with a prayer blanket that the girls were making for patients in the hospital and Hospice. They thought that a rainbow of colors would cheer up the sick and the dying.

We are very happy to hear from His Excellency that he stands by Church teaching that homosexual acts are "intrinsically disordered" and that the blanket draped around his neck had nothing to do with the LGBT movement.

Since Bp. Wack is now aware of the push for same-sex "marriage" by leadership members of the AUSCP and its conference vendors, we hope he will issue a formal condemnation of the AUSCP, forbidding his priests from having anything to do with the organization.

The Lepanto Institute was on location for the duration of the assembly, holding two Rosary rallies of reparation for the heresies and sacrileges being promoted by the AUSCP while further monitoring the AUSCP's activities. While the AUSCP has vocally supported homosexuality in the priesthood and acceptance of active homosexuals into parish life, this is the first time that outright support for same-sex marriage has been openly promoted at the AUSCP assembly.

One of the vendors at the AUSCP's assembly was New Ways Ministry, an organization condemned by both the United States Conference of Catholic Bishops ("USCCB") and the Vatican. Sitting on the table of New Ways Ministry were bumper stickers that said, "Catholics for Marriage Equality: God is love."

It should be noted that New Ways Ministry not only promotes homosexual "marriage equality," it also publishes articles (examples here and here) that suggest that homosexual sexual acts are not sinful.

But it shouldn't come as any surprise that New Ways Ministry is permitted to promote same-sex "marriage" at the AUSCP assembly since one of the members of the AUSCP leadership team, Fr. Peter Daly, is also on the board of directors of the New Ways Ministry.

On June 22, day two of the AUSCP assembly, Fr. Daly tried to snatch a phone from LifeSiteNews reporter Jim Hale. Hale, referring to the bumper stickers, accused Fr. Daly and the AUSCP of promoting same-sex "marriage." Father Daly did not deny the accusation but instead claimed that they are promoting "charity." Here is a recording of that brief exchange:

In addition to the open promotion of same-sex "marriage" were fliers promoting transgenderism, forcing Catholic businesses to hire self-professed LGBTQ individuals and promoting homosexuality and transgenderism among the youth.

The presence of the bishops at the AUSCP assembly under these circumstances is critical. Archbishop Wester is the episcopal moderator for the AUSCP, which means he gives the AUSCP spiritual guidance and acts as a liaison for the USCCB. Since he and Bp. Pates were participants in the assembly, there is absolutely no way they were not aware of the promotion of same-sex "marriage" taking place. And they could not have ignored this pamphlet calling on Catholic employers to pledge to "not discriminate in employment practices on the basis of marital status, sexual orientation, gender identity and personal support for marriage equality." [Emphasis added.]

Bishops must disavow the AUSCP, bar them from any diocesan activity and publicly repudiate the errors promoted at the assembly.

We also saw a pamphlet promoting transexual activism, establishing the notion that men dressed or surgically altered to resemble women (or vice versa) should be allowed full and active participation in all aspects of parish life, regardless of perverse moral activity.

Perhaps worst of all is the pamphlet on holding workshops to introduce the false teachings of New Ways Ministry and its homosexual activism into Catholic schools.

The New Ways Ministry website dedicated to this initiative explains the purpose and scope of the workshop, stating, "This workshop is designed to help participants develop LGBTQ initiatives that fit the unique character of your school community." Among the stated outcomes, the workshop claims that participants will "acquire understanding of Church teaching on sexual ethics and social justice, theological debates, advances and trends in Catholic schools."

Considering the fact that New Ways Ministry professes that homosexual relationships are good and promotes same-sex "marriage," it is very easy to conclude that this workshop will not be providing a proper understanding of "Church teaching on sexual ethics."

Here are a few more pictures of pamphlets and paraphernalia handed out at the AUSCP Assembly in Minneapolis.

All of this activity was openly flaunted in front of these bishops in attendance at the assembly:

By participating in a conference that allows open promotion of active homosexual relationships and same-sex "marriage," the only conclusion one can draw is that these bishops (at least silently) are supportive of what these materials advocate.

Other bishops who are either members or have previously participated in AUSCP events are:

This is scandalous beyond measure! These bishops must disavow and condemn the AUSCP, bar them from any diocesan activity and publicly repudiate the errors promoted at the assembly. Anything short of this is an active betrayal of their God-given ministry of safeguarding the flock Christ entrusted to them.

Be sure to contact your bishop and ask him to publicly condemn the AUSCP and forbid his priests from being members!

Click here for a sample letter you can send.