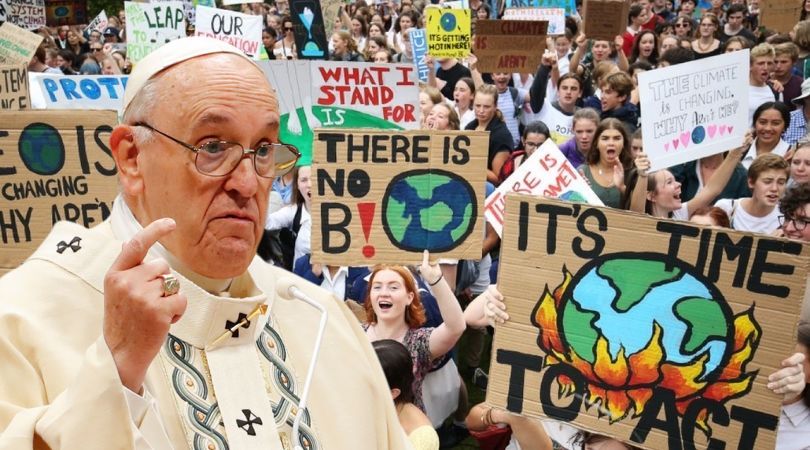 WASHINGTON (ChurchMilitant.com) - United States bishops, by and large, are snubbing Pope Francis' climate change agenda by ignoring it, distancing themselves from it, or downplaying aspects that conflict with a conservative ideology, a new peer-reviewed study has revealed.

Titled "U.S. Catholic Bishops' Silence and Denialism on Climate Change," the research analyzes a dataset of 12,077 columns published by the bishops in official publications for 171 of the 178 U.S. Catholic dioceses between June 2014–June 2019.

Bishops Not Buying It

Despite the Vatican explicitly ordering bishops to "promote Laudato Sí" in their dioceses, the U.S. bishops "only emphasized parts of Laudato Sí that correspond to a conservative political identity/ideology," the study reports.

The study explains the episcopal snubbing of Francis' climate crusade should not be attributed to political conservatism on the part of the bishops but may have been "because of perceived personal lack of topical technical expertise and fear of pushback from Catholics in their diocese."

The pope seems committed to the 'Gaia theory.'

Dr. John Zmirak, a senior editor at The Stream and author of The Politically Incorrect Guide to Catholicism, told Church Militant:

Perhaps the U.S. bishops know their flock. They know that:

To downplay the pope's climate alarmism, bishops issued statements like "no matter your position on climate change, there are important truths in Laudato Sí."

We will tune him out completely, and we ought to cease all financial support to the bankrupt Vatican.

According to the study, the bishops also undermined Francis' claims on climate change by framing climate change as "socially controversial" and divisive.

Bishops Vocal on Other Issues

While "overwhelmingly silent" on climate change, U.S. bishops have been strident on other social and political issues like immigration, racism, abortion, sexuality, religious liberty, police reform and the abolition of the death penalty.

Compared to the 93 columns that mentioned climate change, 1,036 columns in the bishops' writings mentioned abortion and 534 mentioned religious liberty or religious freedom.

Bishops in Britain, meanwhile, have been enthusiastically complying with Francis' climate agenda, along with the Catholic Bishops' Conference of Scotland and all eight Scottish archdioceses and dioceses, announcing their fossil-free commitment Oct. 26, just days before the United Nations climate conference, COP26, began in Glasgow.

Arnold, lead bishop on the environment for the Catholic Bishops' Conference of England and Wales, warns clergy that the 2021 U.N. COP26 conference represents a "last chance," so he is insistent that "following the leadership of Pope Francis, we ... have an impact on these meetings."

Zmirak told Church Militant the voices of U.S. Catholic academics who have critically analyzed Laudato Sí may be another reason explaining the bishops' silence on the issue.

Nicholas Capaldi, professor at Loyola University New Orleans, shreds Laudato Sí in a 22-page assessment lamenting: "His Holiness is on thin ice, and if he turns out to be wrong, then the Church may be facing the embarrassment of a new and contemporary Galilean moment."

"The pope seems committed to the 'Gaia theory' — the view that the earth is one giant, all-encompassing ecosystem in which both organisms and inorganic elements on earth form a self-regulating system that supports life," writes Capaldi.

Labeling Francis' encyclical a "weak teaching document," R.R. Reno explains how Laudato Sí "falls into contradiction because there are no clearly articulated principles guiding analysis of the ecological and social crises precipitated by global capitalism."

"There's little suggestion that Christian revelation, or even belief in God, judges and corrects the ecological movement and its consensus views about global warming," Reno laments in his essay "The Weakness of Laudato Sí."

"If Pope Francis persists in his demand, issued 'in the name of God' to the meeting of far-left 'populist' movements two weeks ago — that the world return to medieval austerity and subsistence economies — he will find that Americans won't listen," Zmirak told Church Militant.

"We will tune him out completely, and we ought to cease all financial support to the bankrupt Vatican. Let Francis ask Beijing to increase its secret subsidies to compensate," he remarked.