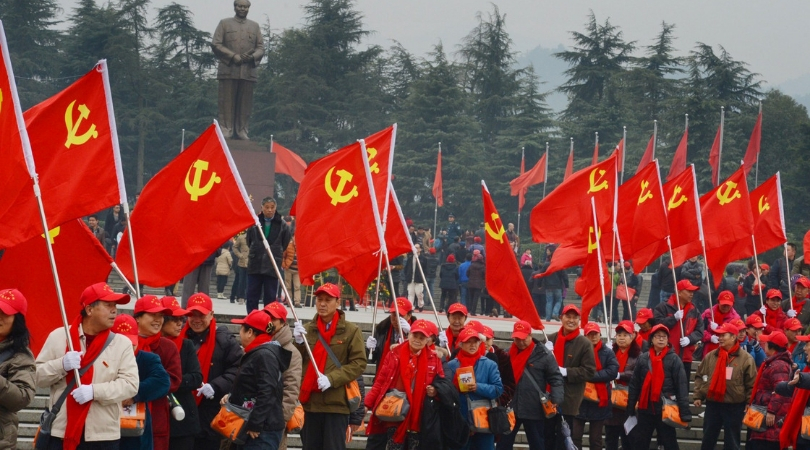 The Francis Vatican should hang its head in shame.

The report divides countries into tiers, with tier 1 countries being designated as countries of particular concern for violations of religious freedom. This designation can carry with it recommendations for potential sanctions.

China is highlighted as a particularly vicious perpetrator against religious freedom.

Not surprisingly, China is listed as a tier 1 country and earned some of the report's most vehement protestations over the religious persecution perpetrated by the Chinese Communist government. In the introduction of the 2019 report, China is highlighted as a particularly vicious perpetrator against religious freedom. The committee commented that, of all the countries, "China is in a category all by itself." The report spares no words for the vicious Chinese regime: "One such saga is currently unfolding in China where the government has been particularly pernicious toward religion and religious believers during the last 20 years — and increasingly so in recent years, including in 2018."

The report forcefully demands that the U.S. Government take swift action against Chinese officials. Chinese religious freedom advocates estimate that the Chinese government is detaining up to 3 million religious minorities, including Christians, Muslims and Uighurs.

The U.S. government — and the international community — must swiftly and resolutely sanction Chinese officials and agencies that have perpetrated or tolerated severe religious freedom violations, including Chen Quanguo, Communist Party Secretary in the Xinjiang Uighur Autonomous Region and other Politburo Members.

The Vatican Is Excoriated for Its China Deal

One of the key findings of the report on China resonates for Catholics. The findings boisterously condemn the secret Vatican deal with the Chinese Government in 2018.

In September, the Vatican reached a provisional agreement with China that would allow the government a role in the appointment of new bishops; nevertheless, repression of the underground Catholic Church increased during the latter half of the year. The government also raided or closed down hundreds of Protestant house churches, including Zion Church, Rongguili Church, and Early Rain Covenant Church. Meanwhile, more than 900 Falun Gong practitioners were arrested during the year simply for practicing their beliefs or distributing literature about the Falun Gong.

In March 2018, jurisdiction over religious affairs was transferred from the government to an organ of the Chinese Communist Party (CCP), further eroding the barrier between religion and party.

In the report, the commissioners expressed deep concern about the persecution of religious minorities in China and highlighted the troubling Vatican/China deal. In fact, one of the commissioners, Johnnie Moore, issued a pointed written statement regarding the Vatican agreement included in the 2019 report. Below is Moore's damning criticism of the Vatican deal:

My personal opinion is that one of the most alarming incidents as it relates to religious freedom in the entire year was the decision by the Vatican to negotiate a diplomatic relationship with China that resulted in the recognition of government-appointed bishops and which also — in effect deposed prominent Chinese religious leaders who had persevered through horrific persecution in previous generations in China, including China’s most well-known Catholic leader.

Literally, within days of the Vatican negotiating its deal, the Chinese used it as cover to embark upon the closure of several of the nation's largest and most prominent unregistered church communities. That has continued. Being that the Vatican is both a Church and a State, it is my opinion that the Vatican now bears a significant moral and legal responsibility to help solve the problem which it helped created — albeit inadvertently — by providing China license to viciously crack down on Christian communities (as cited in this report), and by providing the Chinese government further cover to continue its incomprehensible, inexcusable and inhumane abuses of Muslim citizens in the western part of the country.

While I am entirely for direct engagement on these issues, including with the most severe violators in the world, that engagement must not result in these types of unintended consequences, as has been the case in China. The Vatican made a terrible mistake, which it must take seriously. This debacle must be dealt with urgently and seriously.

This 2019 USCIRF religious freedom assessment provides a thorough and comprehensive analysis of the persecution and conditions of religious minorities in Communist China and addresses the disastrous impact of the Vatican secret deal with the Chinese Communist government.

Zen described the China deal as 'suicide' and 'an incredible betrayal' and a 'complete surrender' for the underground Chinese Catholic Church.

The report's conclusion sadly mirrors the statements by the heroic retired Hong Kong Cardinal Joseph Zen. Cardinal Zen pleaded with the Vatican not to negotiate with the Chinese for fear of renewed Christian persecutions. Zen's prophetic plea proved correct according to the Religious Freedom report. Zen described the China deal as "suicide" and "an incredible betrayal" and a "complete surrender" for the underground Chinese Catholic Church. As he predicted, persecutions increased and the suffering is ongoing at the hands of the Vatican's negotiation partner, the Chinese Communists.

It is urgent that Catholics around the world, freedom loving countries, and the United Nations condemn Pope Francis for his foolhardy and horrific deal and demand that the Vatican immediately entirely withdraw from this agreement which "provided China cover" to violently crack down on Christians. Nothing less will do.

It's the merciful thing to do, Pope of Mercy.

Elizabeth Yore is the former Special Counsel at Harpo with Oprah Winfrey. She is an international human rights attorney, specializing in child protection. She can be reached at YoreChildren.com.

Fort Worth Bishop Spearheaded Attacks on TX Right to Life