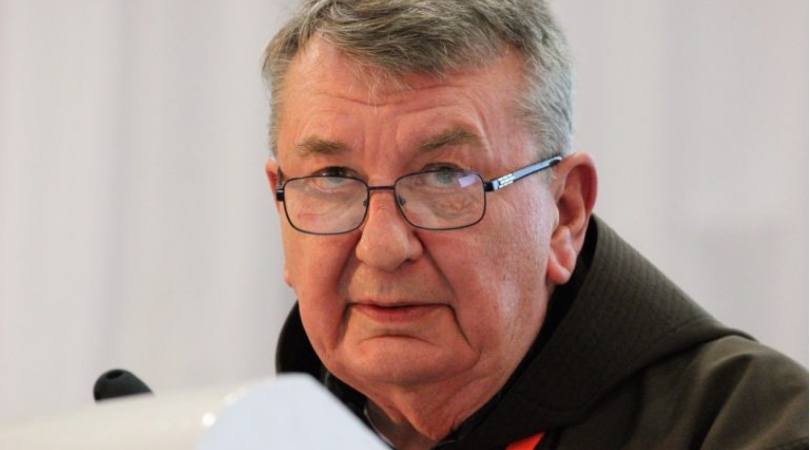 Fr. Weinandy on 'internal papal schism' and the role of laity to save the Church

VATICAN (ChurchMilitant.com) - A renowned American theologian is calling the intensifying schism under the current pontificate "frightening."

"Pope Francis recently spoke of a possible schism within the Church, a schism that does not frighten him," Weinandy writes in a column published Tuesday in The Catholic Thing. "We have had many schisms in the past, he says, and there will be schisms in the future. So, there is nothing to fear in the present."

This unprecedented new schism is frightening.

"However, it is the nature of the present possible schism that is new, and this unprecedented new schism is frightening," Weinandy adds.

Weinandy was forced to resign as consultant at the ITC after he published a letter in 2017 seeking clarity from Pope Francis.

"I write this letter with love for the Church and sincere respect for your office," his letter began.

"Yet, Your Holiness, a chronic confusion seems to mark your pontificate," he continued. "The light of faith, hope, and love is not absent, but too often it is obscured by the ambiguity of your words and actions."

After laying out a number of doctrinal concerns, Weinandy noted that bishops are afraid to criticize the pope because "what many have learned from your pontificate is not that you are open to criticism, but that you resent it."

As a result of this missive, the U.S. Conference of Catholic Bishops removed Weinandy from his post. A number of Catholics were severely critical of the bishops at the time for what they saw as cowardice.

In Weinandy's Tuesday column, he observes that there is a situation, "ever-growing in intensity," where a number of orthodox Catholics remain faithful to the pope, although critical of his pontificate, while a faction of liberal Catholics "enthusiastically" support Francis because of the doctrinal ambiguity he fosters.

"What the Church will end up with, then, is a pope who is the pope of the Catholic Church and, simultaneously, the de facto leader, for all practical purposes, of a schismatic church," Weinandy writes. "Because he is the head of both, the appearance of one church remains, while in fact there are two."

The appearance of one church remains, while in fact there are two.

Weinandy calls this "internal papal schism," because Francis is effectively the head of a liberal faction in the Church that is, in practice and belief, schismatic.

"This is the real schism that is in our midst and must be faced," says Weinandy.

The pontiff does not seem to fear such schism, says Weinandy, but welcomes it as "the new 'paradigm' for the future Church." For this reason, the faithful must implore God to deliver us from the current crisis.

Thus, in fear and trembling, we need to pray that Jesus, as the head of His body, the Church, will deliver us from this trial. Then again, he may want us to endure it, for it may be that only by enduring it can the Church be freed from all the sin and corruption that now lies within her, and be made holy and pure.

Weinandy believes that when Francis mentioned schism, he is referring largely to his American critics, who offer "his most theologically challenging and pastorally concerned criticism."

"Francis thinks that they are unwilling to change, and so refuse to accept the new work of the Spirit in our day," he continues.

"What Francis does not realize (and his close associates fail to grasp) is that the overwhelming majority of his American critics would never initiate a schism," Weinandy says. "They recognize that he is the pope and thus the successor of Peter, and that to remain within the Catholic Church is to remain faithful to the pope, even if it entails being critical of the pope in one’s faithfulness to him."

Instead, Weinandy notes that the German Church is far more likely to go into schism.

"The German bishops are proposing a two-year 'binding' synod that, if what is proposed is enacted, would introduce beliefs and practices contrary to the universal tradition of the Church," he says.

The "synodal path" proposed by the German bishops would challenge clerical celibacy and Church teaching on human sexuality, including homosexuality and use of contraception, and has faced objections from the Vatican. But Cdl. Reinhard Marx, president of the German bishops' conference, made clear after a recent private meeting with the pontiff that Francis would put up no roadblocks to their plan.

"There is no stop sign," Marx said. "I cannot see that the synodal path now somehow would be endangered."

I believe it will be the laity who bring about the needed purification.

While Francis is not allowing them to openly contradict Church teaching, Weinandy clarifies that he is permitting them "to do things that are ambiguously contrary, for such ambiguous teaching and pastoral practice would be in accord with Francis' own."

Echoing the words of Abp. Fulton J. Sheen, Weinandy expresses hopes that it will be the laity who will help save the Church.

"I believe it will be the laity who bring about the needed purification," he says. "Lay people see themselves as helpless, having no ecclesial power. Yet if the laity raise their voices, they will be heard."