US Bishops’ Pro-Life Chair: No Communion for Pro-Abort Politicians

Two months into his term as chairman of the USCCB Committee on Pro-Life Activities, Abp. Joseph F. Naumann of Kansas City, Kansas has issued a statement reminding Catholic lawmakers that abortion advocacy is a gravely immoral — and potentially damnable — offense.

"Recent efforts to perpetuate and expand abortion in state laws have illuminated the deplorable actions of some Catholic public officials and advocates," Naumann lamented. "Their efforts to support and even celebrate such legislation will result in killing many more unborn children, as well as the spiritual and emotional wounding of their mothers and fathers."

Reiterating Church teaching on gravely immoral acts, the archbishop continued: "Advocating for intrinsically evil acts, like abortion, is a serious immoral act — one that involves grave matter, the prerequisite for the commission of a mortal sin."

Though cautioning against judging the subjective conscience of pro-abortion politicians, Naumann warned of a divine reckoning for their objective actions in support of abortion.

"While we can object to the actions of these public officials, we are not able to judge their souls," said the archbishop.

Conscious and unrepentant mortal sin endangers our eternal souls and places ourselves on a path to Hell. To receive our Eucharistic Lord, while in a state of mortal sin, only further jeopardizes the eternal fate of our souls.

"At the same time," he added, "we know there will be a Judgment Day."

Conscious and unrepentant mortal sin endangers our eternal souls and places ourselves on a path to Hell. To receive our Eucharistic Lord, while in a state of mortal sin, only further jeopardizes the eternal fate of our souls. Sincere repentance, a conversion of heart, and a genuine effort to make amends for the harm caused by our sin, are essential to be able to receive God's mercy.

Reflecting on his moral duties as a Catholic prelate, Abp. Naumann said that he is compelled to call pro-abortion Catholic officials out of their sin — and to penalize them if they refuse.

"In my own role as a bishop, I have a serious responsibility to make certain that those entrusted to my pastoral care are aware of the moral gravity and spiritual consequences of their actions," he wrote. "I also have a serious obligation to protect other members of my flock from being misled by a seeming tolerance of the scandalous behavior of some Catholics in public life."

While stressing the importance of attempting to "enter into dialogue with such Catholic leaders," Naumann warned that those who refuse to renounce their sin preclude themselves from receiving the Eucharist.

"If even after an extended dialogue a Catholic in public life persists in scandalous actions," he said, "I have found it necessary to request that they not present themselves to receive Holy Communion, for their own spiritual welfare and for the protection of many others from moral confusion."

The archbishop ended his statement with an appeal for prayer: "I invite all Catholics to pray for spiritual healing for all those involved in or advocating for legalized abortion. When we truly repent, God is always eager to lavish us with His mercy."

Archbishop Naumann's statement echoes canon 915 of the Code of Canon Law, which declares that those "obstinately persevering in manifest grave sin are not to be admitted to holy communion."

Public exclusion from Communion is rare in the U.S. Catholic Church today; in 2018, Bp. Thomas Paprocki of Springfield, Illinois made headlines by reaffirming an earlier pronouncement barring Sen. Dick Durbin (D) from the Eucharist for promoting abortion.

"Because [Senator Durbin's] voting record in support of abortion over many years constitutes 'obstinate persistence in manifest grave sin,'" Bp. Paprocki declared, "the determination continues that Sen. Durbin is not to be admitted to Holy Communion until he repents of this sin."

More common is the approach of Cdl. Timothy Dolan, who has refused to penalize New York Gov. Andrew Cuomo, who last month rammed through a bill legalizing abortion up to the moment of birth. 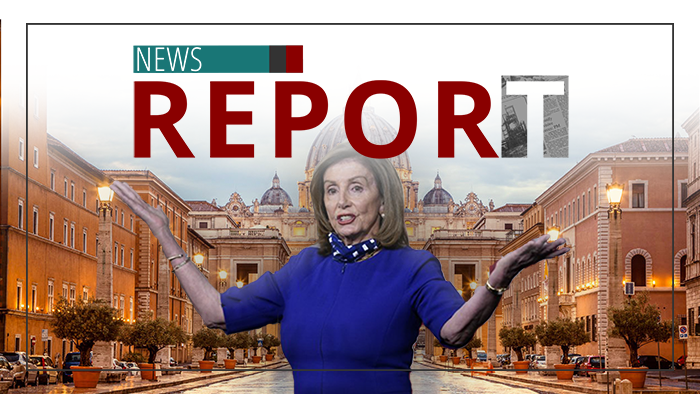