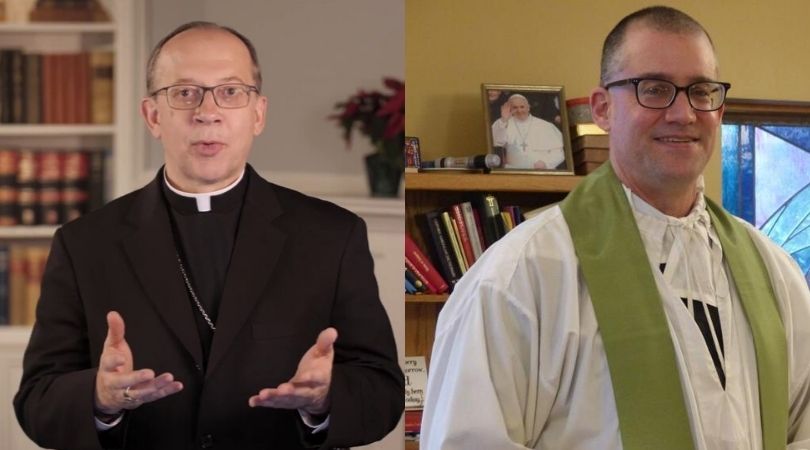 RICHMOND, Va. (ChurchMilitant.com) - A Virginia priest is speaking freely about his suspension from ministry owing to his blog, which addresses the hierarchy's mishandling of clergy sex abuse.

Father Mark White reflected on his suspension from ministry and the need for open discussion in a column published Sunday by the Star-Ledger, New Jersey's most circulated newspaper.

"I am glad they decided to publish my op-ed in Newark, where McCarrick had been archbishop for so long," Fr. White told Church Militant. "Hopefully this will continue a conversation about getting the full truth out."

"All of us who have been affected by his dishonesty need an accounting of who knew what and when," he added.

Bishop Barry Knestout of Richmond suspended Fr. White in May over the priest's blog, which was critical of the Church's handling of predators in the clergy.

"Until recently, I was the pastor of two parishes in southwest Virginia, one in Martinsville and the other in Rocky Mount," White explained. "I began blogging in 2008 as an additional way of reaching the faithful. For the first decade, my digital homilies and musings attracted little attention outside my parishes."

"In 2018, though, like many Catholics, I was shaken when news emerged of sexual abuse by Cdl. Theodore McCarrick, the archbishop of Washington," he continued.

Revelations of McCarrick's abuse were particularly galling for White, as the now-disgraced ex-cardinal had ordained him in 2003.

"When I learned of McCarrick's misbehavior and the surrounding cover-up, I was deeply upset. I had received Holy Orders from a criminal — and felt a responsibility to explore how my Church had failed," White lamented. "On my blog, I began to question and criticize Catholic leadership."

The restoration of your priestly faculties ... will be dependent on your taking down your blog.

Father White pointed out the faithful are to speak the truth freely.

"Unfortunately, Bp. Barry Knestout, the leader of the diocese of Richmond, does not appear to agree," he said. "In Nov. 2019, he ordered me to remove my blog from the internet. I initially complied. But when the pandemic hit, I felt it was important to connect with my parishioners online. I resumed posting this past March."

This led Bp. Knestout, in April, to oust Fr. White from his parish and prison work.

"While this is important work, Knestout's intention was to punish and silence me, as he indicated when he wrote that 'the restoration of your priestly faculties ... will be dependent on your taking down your blog,'" ventured White. "I appealed to the Vatican and was awaiting an answer when Knestout prohibited me from practicing ministry in any form."

"He even changed the locks on the two churches I served, which include my living quarters," he added. "I have no other home in the area, and my mother resides in an assisted living facility nearby. At this point, I have to rely on the kindness of parishioners."

The faithful deserve a forthright conversation that would allow the Church to reckon with its past and prevent abuse in the future.

Father White sees his problems as nothing compared to those in which the Church is currently immersed.

"The faithful deserve a forthright conversation that would allow the Church to reckon with its past and prevent abuse in the future," he said. "To respond to that call with dictates for silence is to repeat the mistakes of the last two decades."

Uncertain of his own future as a priest, Fr. White is certain that "We need people speaking the truth freely in the Catholic Church more than ever."

Before being installed as bishop of Richmond in 2018, Knestout served as disgraced ex-cardinal Theodore McCarrick's personal secretary.

Cardinal Donald Wuerl ordained Knestout a bishop in 2008 in Washington, D.C., where he served Wuerl as an auxiliary bishop.

As bishop of Richmond, Knestout doubled down in January when faithful Catholics opposed him for allowing St. Bede Catholic Church in Williamsburg, Virginia to be used for the Protestant "consecration" of Susan Bunton Haynes to the Episcopal bishopric.

"Use of space in a Catholic parish for the Episcopal Church to conduct their own religious ceremony is well within the accepted ecumenical teachings and norms of the Church," he said in a statement at the time. "I appreciate that you are concerned that the sacred space of the Catholic Church be safeguarded, which it is."

"It is with great sadness that I have received a letter from bishop-elect Susan Haynes stating that, due to the controversy of the proposed use of St. Bede Catholic Church for her consecration ... she has decided to find another location for the ceremony to take place," he said in another statement.

Knestout concluded the statement by saying, "As I assure bishop-elect Haynes of my prayers ... I ask our Catholic faithful to pray for them, too, and to pray that the fruits of the Holy Spirit, along with humility, kindness, gentleness and joy be expressed and strengthened in all our faith communities."

Knestout permits a man in a so-called same-sex marriage to continue as an organist in the diocese and offers to pay victims of clergy sex abuse only if they agree not to sue the diocese.

Church Militant recently reached out to the Richmond diocese regarding Virginia's state health commissioner wanting to force vaccines but never received a response.