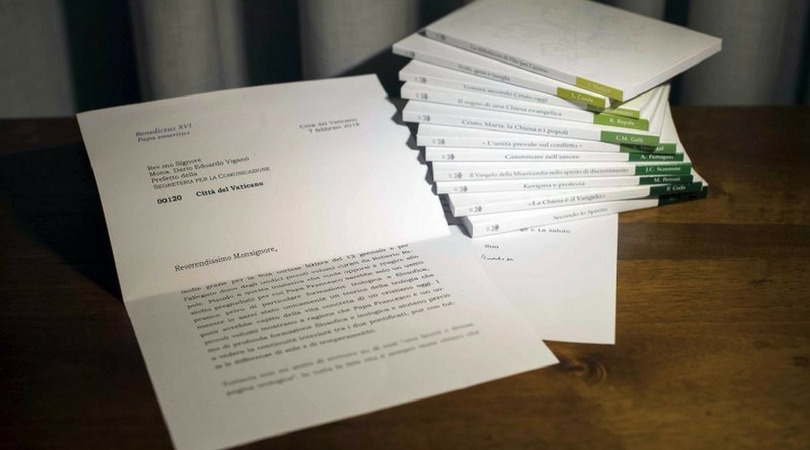 A violation of photojournalistic standards

UPDATE, 3/17/2018: The Vatican has published the complete letter from Pope Benedict, in which it's revealed that the real reason Benedict refused to write an endorsement of the 11 volumes is because he objected to the contribution of a heterodox theologian. Read more here.

VATICAN CITY (ChurchMilitant.com) - The Vatican is admitting it doctored a photo of a letter written by Pope Benedict. According to the Associated Press, "The manipulation changed the meaning of the image in a way that violated photojournalist industry standards."

The letter, written on February 7, was not released until Monday, just before Pope Francis' five-year anniversary. The letter's contents were read by Msgr. Dario Viganó, chief of communications, in which Pope Benedict claimed continuity between this pontificate and that of Pope Francis. He also rebutted the "foolish prejudice" claiming that the two popes were theologically opposed. The letter itself was occasioned by the gift of 11 "small volumes" on Francis' theology.

A paragraph of the letter, however, was deliberately blurred in a Vatican photo. It reveals that Pope Benedict has not thoroughly read the volumes, and turned down the Vatican's request that he write an endorsement of them. Italian journalist Sandro Magister published the letter in full in his column, which included the paragraph:

Nonetheless, I do not feel that I can write a brief and dense theological page about them because for my whole life it has always been clear that I would write and express myself only on books that I had also truly read. Unfortunately, even if only for physical reasons, I am not able to read the eleven little volumes in the near future, all the more so in that I am under other obligations to which I have already agreed.

The Associated Press reported Wednesday that a Vatican spokesman, speaking on condition of anonymity, admitted the Vatican had "blurred the two final lines of the first page where Benedict begins to explain that he didn't actually read the books in question."

The missing content significantly altered the meaning of the quotes the Vatican chose to highlight, which were widely picked up by the media. Those quotes suggested that Benedict had read the volume, agreed with it and given it his full endorsement and assessment. The doctoring of the photo is significant because news media rely on Vatican photographers for images of the pope at events that are otherwise closed to independent media.

Last year, the Vatican overhauled its news and communications departments, joining them all under one entity: the Secretariat for Communications, headed by Msgr. Viganó. On the occasion of World Communications Day in January, Pope Francis slammed "fake news" as "a sign of intolerant and hypersensitive attitudes, and leads only to the spread of arrogance and hatred."

"If responsibility is the answer to the spread of fake news," the Holy Father declared, "then a weighty responsibility rests on the shoulders of those whose job is to provide information, namely, journalists, the protectors of news."