VATICAN CITY (ChurchMilitant.com) - The Pontifical Academy for Life (PAL) is stepping up its crusade against so-called vaccine hesitancy by co-opting scientists on globalist bodies to attack "anti-vaxxers," who, they claim, are spreading "misinformation and fake news."

"Misinformation is one of the core reasons to vaccine hesitancy," Prof. Frank Ulrich Montgomery, chair of the council of the pro-abortion World Medical Association (WMA) told a Vatican press conference Friday.

Dr. Ramin Parsa-Parsi, head of the international department of the German Medical Association (GMA), stressed that globalist health agencies were partnering with the Vatican to "confront vaccine hesitancy" by "counteracting vaccine myths and disinformation."

While the scientists struggled to provide adequate answers to questions on the safety and efficacy of the experimental jabs, PAL head Abp. Vincenzo Paglia, who presided over the presser, insisted the Vatican had already dealt with the moral issue of vaccines using fetal cell lines from babies murdered through abortion.

Questions for the So-Called Experts

Church Militant asked both scientists why they persist in "derogatory name-calling" by using the label "anti-vaxxer" in "scientific discourse."

Are the scientists willing to acknowledge that the debate over the safety and efficacy of the mRNA vaccines in peer-reviewed medical journals (like the British Medical Journal (BMJ), the New England Journal of Medicine (NEJM) and Vaccines) is "contested?" Church Militant pressed.

Church Militant also asked why award-winning medical researchers like Profs. Sucharit Bhakdi and Karina Reiss are being canceled in the discussion over the COVID-19 shots — instead of being included in the scientific debate "because this is what science is all about."

These proven, cheap, effective therapeutics were the elephant in the room at the Vatican press conference.

Dr. Parsa-Parsi replied by insisting that apart from the jabs, "there is no direct treatment available right now." The jabs, according to Parsa-Parsi, are "highly effective" and can save "millions of lives." He added that "there is a very clear message from the Pontifical Academy from Life."

"Especially when it comes to vaccines, all the questions and all the clarities (sic) have been checked, and I think there's no reason why we shouldn't be confident that the vaccines are a blessing for our patients and for the people," Parsa-Parsi emphasized, evading the question of adverse effects.

Professor Montgomery said he had received the peer-reviewed study from Church Militant but described the author of the article (there were multiple authors) as working under a "gross misconception" and a "gross fallacy" by ignoring variables like "the new Delta variants."

"Though this paper may be peer-reviewed, it is not really very important," Montgomery noted.

Anti-vaxxer is not a scientific word; it is a political word.

Montgomery admitted that "anti-vaxxers is not a scientific word, but it is a political word because we have the problem that, for ideological reasons, there are people who will simply fight against vaccination, against science and against better knowledge."

"Anti-vaxxers are to be discriminated (sic) from people who are vaccine-hesitant. It is these we have to reach," he clarified.

On adverse effects, Montgomery conceded "no one can say anything about long-term effects because we've only administered these techniques for six months now."

"But, as far as we know, these techniques are very safe and produce much less (sic) side effects than, for instance, the well-known vector therapies, which have a very high rate of side effects, especially at the first dose," he maintained.

Irish Catholic medic Pat Morrisey, who watched the discussion online, told Church Militant that "the scientists did not engage with any of your issues honestly," explaining that he himself had "no conflict of interest."

"How then have I successfully treated so many high-risk patients with hydroxychloroquine or ivermectin" if Dr. Parsa-Parsi claims "there are no direct treatments available?" Dr. Morrisey asked.

"These proven, cheap, effective therapeutics were the elephant in the room at the Vatican press conference. Parsa-Parsi's statement is either from a place of ignorance or denial. Either is unforgivable as these medicines are both ultra-safe and effective," the Catholic doctor observed.

"Montgomery's pronouncements as a WMA representative are shocking given the 1964 WMA 'Helsinki Declaration' that states the fundamental principles of ethics protecting patients from being subjects of medical experimentation," Dr. Morrisey remarked.

There is too much money at stake.

The VAERS data shows approximately 16,000 dead in the E.U. and 6,000 dead in the U.S. from the jab, and they talk about coercing younger people to take these agents when COVID-19 is no risk to them. In fact, the vaccine is much more of a threat.

Professor Peter McCullough, a world-renowned physician and cardiologist and the editor of three journals and the most-cited author in the world in his field of cardiorenal medicine, says that the vaccine rollout should be stopped due to the safety concerns. He has called the vaccines a bioweapon.

The evidence in India and Mexico and from trials collated at C19study.com prove that an alternative to experimental vaccines exists, but it is ignored as the acknowledgement of this elephant will invalidate the "emergency use authorizations" that currently function in place of a license.

"There is too much money at stake," Morrisey concluded.

The scientists partnering with the Vatican did not address the uncritical conflation of the untested mRNA experimental vaccine technology with traditional vaccines or the cancel culture against doctors and scientists speaking about the jab's adverse effects.

Three days before the Vatican presser, inventor of mRNA vaccines Dr. Robert Malone said that LinkedIn had canceled his account after he questioned whether the jabs were appropriate for certain groups of people.

During the presser, Abp. Paglia described "vaccine hesitancy" as a "varied phenomenon that has different motivations in different areas of the world." PAL has never spoken of an "obligation" but only the "responsibility" to get jabbed, he clarified.

However, he insisted that individual freedom could no longer be seen as an absolute "because the virus had destroyed this conception" and the responsibility to take the vaccine was "very, very serious" because the health of others was at stake.

In May, the Oxford-based Anscombe Bioethics Centre warned that the WMA was preparing to introduce a "deeply problematic" amendment to its code of medical ethics that would put restrictions on "conscientious objection" by doctors to abortion. 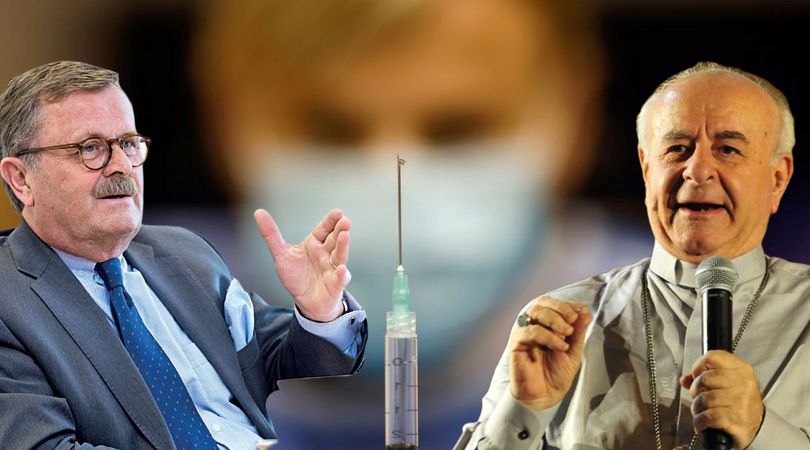