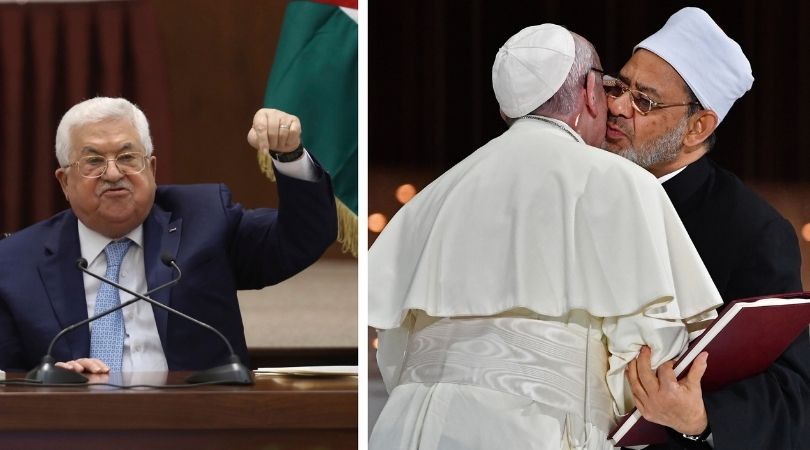 VATICAN CITY (ChurchMilitant.com) - Pope Francis' new encyclical on "human fraternity" — a sequel to his Abu Dhabi pact with Grand Imam Ahmed al-Tayyeb — will be signed on the afternoon of Oct. 3 in Assisi, the Vatican confirmed Saturday.

The Holy Father will sign his third encyclical "All Brothers: On Fraternity and Social Friendship" (Fratelli tutti: sulla fraternità e l’amicizia sociale) "privately, without any participation of the faithful," because of the "health situation" after celebrating Mass in the lower basilica, said Mattei Bruni, director of the Holy See Press Office.

The Vatican explained that the pope's new encyclical recalled a central theme of his Magisterium, since his pontificate was flagged off on the evening of his election by his first greeting to the world with the word "brothers."

"The theme of fraternity is also present in his constant embrace of migrants, epitomized in his pastoral visit to Lampedusa," Vatican News reported. "His signing of the Document on Human Fraternity in Abu Dhabi in 2019 marks one more example of Pope Francis' dedication to promoting brotherly love."

The Italian edition of Vatican News revealed that "Shimon Peres and Abu Mazen, who shook hands with the pope in 2014, are also an example of that fraternity that has peace as its goal."

Abu Mazen, better known in the English-speaking world as Mahmoud Abbas, is president of the Palestine Authority (PA) and has been chairman of the Palestinian Liberation Organization (PLO) since 2004. In 2014, Francis welcomed Abbas along with Israeli president Shimon Peres to the Vatican for a joint prayer session.

In comments to Church Militant, Islamic historian Robert Spencer said, "Mahmoud Abbas has made it abundantly clear over the years that he doesn't want peace, but the total destruction of Israel as a Jewish state and the eradication of all Jews from the region."

We welcome every drop of blood spilled in Jerusalem.

Abbas went on to say:

With the help of Allah, every shaheed ("martyr") will be in Heaven, and every wounded will get his reward. All of their steps, we will not allow them. All these divisions, Al-Aqsa is ours, and the [Church of the] Holy Sepulcher is ours, everything is ours, all ours. They [the Jews] have no right to desecrate them with their filthy feet and we won't allow them to.

According to Spencer, author of 21 books on Islam and the Middle East, "Abbas envisions the total expulsion of Jews from a Palestinian state: 'In a final resolution, we would not see the presence of a single Israeli — civilian or soldier — on our lands.'"

The Islamic expert also told Church Militant that Pope Francis' rose-tinted view of human fraternity is not shared by Muslims.

"As for regarding all human beings as brothers, both Sunni and Shi'ite Islam teach that the lives of non-Muslims are not worth as much as the lives of Muslims," Spencer remarked.

The Qur'an calls Jews and Christians 'the vilest of created beings.'

"The Qur'an calls 'the unbelievers among the People of the Book,' that is, Jews and Christians who do not accept Islam, 'the vilest of created beings (98:6),'" he stressed.

"But the pope's encyclical is certain to ignore all of this, and it is likely that the pontiff is completely unaware of it. The encyclical will mislead millions of Catholics into a complacency that could be fatal," Spencer lamented.

On Thursday, Abbas hosted a meeting in Ramallah for Palestinian leaders, including senior members of terror groups Hamas and Islamic Jihad, urging them to refrain from normalizing relations with Israel.

Meanwhile, the Vatican revealed that the title of the pope's new encyclical was inspired by the writings of St. Francis (Admonitions 6, 1:FF 155), which reads: "Let us all, brothers, consider the Good Shepherd Who to save His sheep bore the suffering of the Cross."

A Rome-based theologian told Church Militant this is yet another example of Pope Francis "taking words out of context and using them as a pretext to further his globalist agenda."

"Saint Francis is addressing his Admonitions to his religious brothers giving them counsels on the religious life," the theologian said. "Is Pope Francis, like the saint of Assisi, asking Muslims in his human fraternity document or in this new encyclical to 'consider the Good Shepherd who suffered crucifixion to save His sheep?'"

"Significantly, chapter 6 is titled 'Imitation of Our Lord,'" he added.

Pope Francis' "Document on Human Fraternity for World Peace and Living Together" does not mention the Lord Jesus Christ even once.

The theologian, who asked not to be named, explained that Francis' new definition of "brotherhood" would contradict Scripture and Tradition if the papal encyclical failed to distinguish between the universal brotherhood in Adam and Noah from Christian brotherhood embracing only those who have undergone the rebirth of baptism.

By historical standards, some 99.9999999999% of papal statements come with no guarantee of infallibility.

"A brotherhood which embraces everyone in equal manner cannot expect to be taken seriously by anyone," Ratzinger wrote.

The theologian warned that the production of encyclicals not in step with Scripture and Tradition was in danger of eroding the trust of the faithful in the ordinary magisterium.

According to Catholic academic John Zmirak: "It is easy for Catholics to fall into the trap of overemphasizing papal authority, even seeming to deify the pope, treating his every statement, encyclical or policy decision as being straight from the mouth of God.

"By historical standards, some 99.9999999999% of papal statements come with no guarantee of infallibility," Zmirak writes in The Politically Incorrect Guide to Catholicism. "That doesn't mean they are wrong. But insofar as they are authoritative, it is because they repeat and explain what Christians have always believed — at least implicitly — since Jesus taught it to His Apostles face to face."

A teaching of the ordinary magisterium is only infallible "if an important condition is met: All the bishops in the world have to teach it in union with the pope," Zmirak emphasizes.

Church Militant reported last week that Francis would pen his encyclical after Bp. Domenico Pompili of the diocese of Rieti told a press conference that "the pope himself will soon publish an encyclical on the theme of human fraternity."