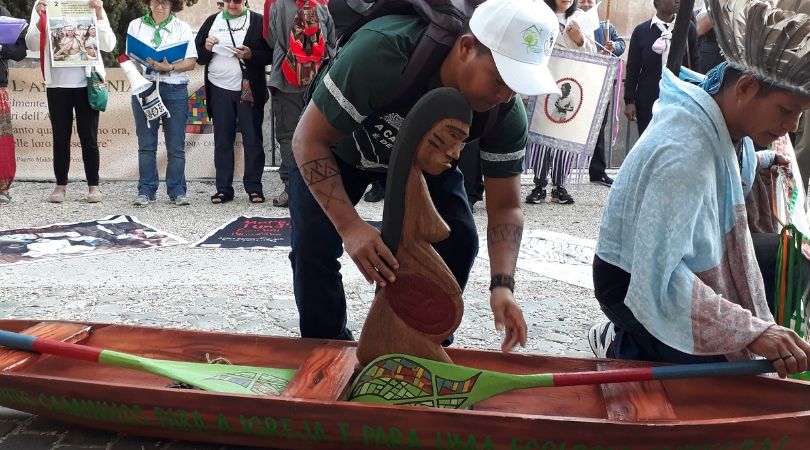 Priests, laity weigh in on display of controversial fertility figure

VATICAN (ChurchMilitant.com) - The Vatican is considering pressing criminal charges against the "new iconoclasts" who removed the pagan "Pachamama" statues from the Church of Santa Maria del Traspontina and dumped them in the River Tiber Monday morning.

Vatican spokesmen have reacted with outrage after a local Italian newspaper carried a story on the unceremonious immersion of the fertility idols with the headline "Justice is done." REPAM, a Catholic network that advocates on behalf of Amazon peoples and is headed by Synod leader Cdl. Claudio Hummes, has condemned the act "of violence" in a statement published Monday.

"We deeply regret and at the same time denounce that in recent days we have been victims of acts of violence, which reflect religious intolerance, racism, oppressive attitudes, which affect above all indigenous peoples, a refusal to build new roads for the renewal of our Church," the statement read.

REPAM (led by Cdl. Hummes, leader of the Amazon Synod, who invited a pro-infanticide Communist to the Vatican last week) has condemned the Pachamama drownings.https://t.co/B6NhkOt3CA pic.twitter.com/fYTObqn6NA

Calling the traditionalist Catholics who removed the statues "the new iconoclasts," Andrea Tornielli cited the writings of the newly canonized Cdl. John Henry Newman to support the adoption of pagan elements. Quoting Newman's 1878 Essay on the Development of Christian Doctrine, he wrote:

The use of temples, and these dedicated to particular saints, and ornamented on occasions with branches of trees, incense, lamps and candles; votive offerings on recovery from illness; holy water, asylums; holy days and seasons, use of calendars, processions, blessings on the fields, sacerdotal vestments, the tonsure, the ring in marriage, turning to the east, images at a later date, perhaps the ecclesiastical chant, and the Kyrie Eleison, are all of pagan origin, and sanctified by their adoption into the church.

Saint Francis of Assisi is also showcased by the Vatican in defense of pagan idols: "An image of motherhood and the sacredness of life, a traditional symbol for indigenous peoples representing the bond with our 'mother earth,' as described by Saint Francis of Assisi in his Canticle of the Creatures, was thrown away with contempt in the name of tradition and doctrine," wrote Tornielli.

This piece by @Tornielli, the Editorial Director for the Vatican Dicastery for Communication, is very important, as it is a Vatican source which confirms that the indigenous statutes representing "life, fertility, Mother Earth" are indeed pagan #SinodoAmazonico #AmazonSynod https://t.co/94SxlmBcGE

Father Cor Mennen, lecturer in Canon Law at the Major Seminary of the Diocese of 's-Hertogenbosch (Netherlands), disagrees, saying that what was done to the carved fertility figures was right.

"But now that they are bringing their horrors into a Catholic Church and desacrating a holy place with an idol, such an action is more than justified," said Fr. Mennen. "After all, we must obey God more than those disturbed organizers of the synod."

"Those violently objecting to the righteous removal of the idols from a Vatican church can't get their stories straight," Deacon Nick Donnelly told Church Militant.

"Expressing manufactured outrage, some claim that they represent Our Lady of the Amazon but Vatican officials have repeatedly insisted that they have no connection with the Blessed Virgin Mary but are effigies representing fertility, women or life," he said. "They don't realize that this is exactly what Pachamama idols represent."

"Others claim that the idols represent Mother Earth as described by St. Francis of Assisi in his Canticle to Brother Sun," Donnelly continued. "But St. Francis made it clear that it was a hymn about the Lord's creatures. Christians do not worship creatures, but those in Rome worshiped these idols with profound prostrations, by so doing proving that they are indeed idols. The more the critics of these young men object the more they prove they did the right thing."

God bless you all pic.twitter.com/RIcXjb7zXD

"It is ironic that the Vatican is using Newman's argument explaining how certain aspects of liturgy are of pagan origin, when their spokespersons have been repeatedly denying that the 'Pachamama' idols are pagan," one Old Testament scholar told Church Militant.

"The fertility cult of Baal was the most pernicious and persistent problem faced by Israel," he explained. “The Israelites came to trust in Baal, rather than Yahweh, for fertility for their wives, cattle and land. As a result of the syncretism between Baal and Yahweh, temple worship became sexualized and the prophet Amos laments that "a man and his father go in to the same girl, so that God's holy name is profaned.'"

Father Dwight Longenecker, author of 20 books on apologetics, the saints and Catholic culture, explained why the Amazon Synod statues are not Catholic.

That's not the way Catholics use statues, he writes, elaborating on Jesus Christ as the image (icon) of the unseen God. Human beings are created in God's image and baptized Christians are unique images of Christ who is the image of God.

Longenecker explains how "an authentic Catholic image is the representation of a real person who, by God's grace, has become remade into Christ's likeness."

An authentic Catholic image is the representation of a real person who, by God's grace, has become remade into Christ's likeness.

However, a "pagan image is not a real person" but "an idol" and "either a representation of a demon or a symbol of some sort of spirit or demigod."

"Pachamama ain't Catholic because Pachamama is a false idol, a heathen substitute for the Blessed Virgin," and her veneration has turned the Amazon Synod at best into "a phony public relations exercise that will soon be forgotten," and "the promotion of a false gospel" at worst, he remarks.

"The reason for the criticism is precisely because of the primitive nature and pagan appearance of the ceremony and the absence of openly Catholic symbols, gestures and prayers during the various gestures, dances and prostrations of that surprising ritual," he said.