Cdl. Becciu in Another Money Scandal 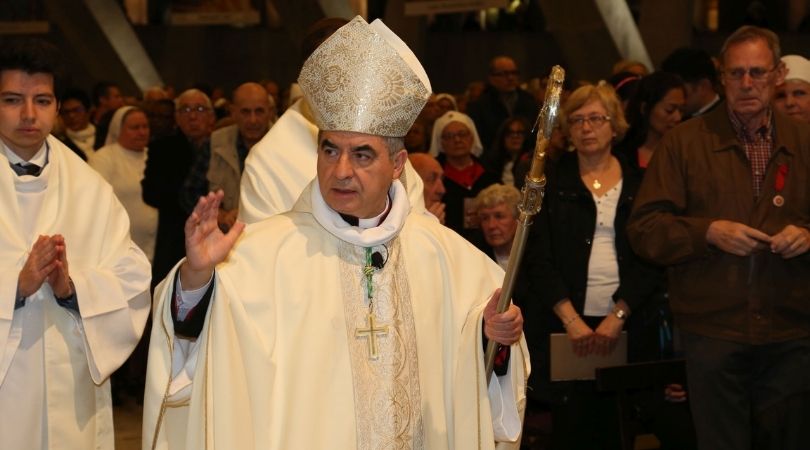 VATICAN CITY (ChurchMilitant.com) - A Vatican cardinal who was recently forced to resign over money scandals allegedly sent over a half million euros to a 39-year-old woman in Slovenia.

Cardinal Angelo Becciu, former prefect of the Vatican's Congregation for the Causes of Saints, is being accused of sending Cecilia Marogna, originally from Becciu's native Island of Sardinia, more than 500,000 euros. The Italian daily newspaper Corriere della Sera reported Tuesday the cardinal sent her several installments for over four years.

Becciu resigned in September after being tied to a Vatican investment scandal with a London real estate deal that lost the Holy See millions of euros. He is also allegedly involved in sending 700,000 euros to influence false witnesses in the trial of Cdl. George Pell in Australia.

Denying any inappropriate relationship with Becciu and any impropriety in obtaining the money, Marogna defended her reputation against media gossip.

"Those (stories) about me? All falsehoods! Am I a lover of the cardinal? Absurd. I am a political analyst and an intelligence expert who works honestly and who lives on rent (raising) her daughter," she decried.

Corriere della Sera reported Tuesday that Marogna owns a company based in Slovenia and that she received wire transfers from accounts attributed to Becciu. The money supposedly was meant to go to humanitarian missions in Africa and Asia.

Becciu resigned in September after being tied to a Vatican investment scandal with a London real estate deal that lost the Holy See millions of euros.

Marogna denies the rumors that she spent much of the money on personal items unrelated to her work as an international consultant. She did not, however, deny spending some on expensive handbags, which she insists are related to her work.

"I [built] a network of relations in Africa and the Middle East designed to protect nunciatures and missions from environmental risks and terrorist cells," she attests.

Some of her expenditures, she insists, were to help her in her work of building these relations.

"I opened the company in Slovenia for geopolitical reasons — I thought the next powder keg would be the one in the Balkans," Marogna explained. "[Also it was] to increase relations with countries such as Georgia, Ukraine, Serbia, Bosnia, Slovenia. My Logic company specializes in humanitarian operations."

Not the 'Only Ones' Unaccountable

Defending herself against the Italian media, Marogna claims the criticism has come "because I do my job well and I always maintain discretion and confidentiality."

Vatican money is not accounted for. It is always confidential transactions.

Asked why there were no invoices on any of these transactions sent to her from the Vatican, Marga explained the unorthodox manner in which some Vatican agencies do business: "Vatican money is not accounted for. It is always confidential transactions."

Marogna suggested how the misunderstanding may have occurred.

"I made a mapping of the missions, of the most remote dioceses; a job that the Vatican had never done. The nunciatures certainly do not report on geopolitics or analysis of data on the territory," she said.

As if to add fuel to the fire, however, Marogna declared: "I can also tell you that Becciu and I weren't the only ones running certain businesses."

Marogna informed Corriere della Sera that she first met Becciu after an email correspondence with him in 2015 when she inquired whether or not he concurred with her analysis of security problems at various Vatican nunciatures.

Becciu has been in the news lately for allegedly wiring money to influence the testimony against Pell at his Australian trial for abusing altar servers. A perceived rival of Pell at the Vatican, Becciu has denied these accusations.

Pell was exonerated. But before this, Becciu denied allegations that money earmarked for helping the poor was used to invest in the failed London property deal.