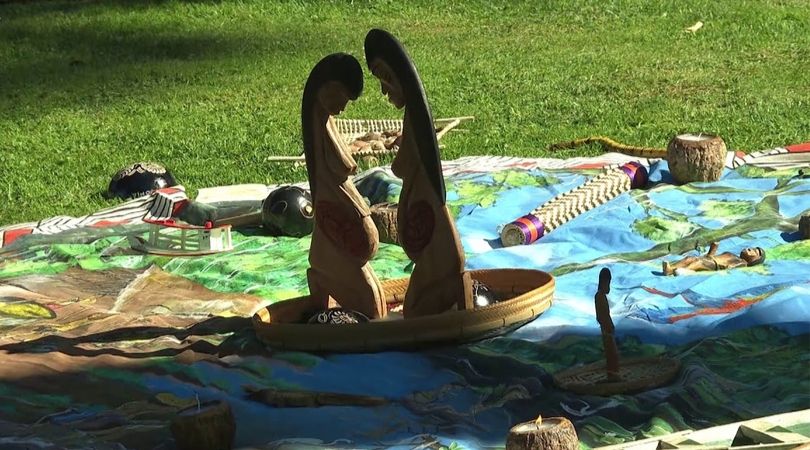 VATICAN (ChurchMilitant.com) - The carved female fertility symbol that seems ubiquitous at the Amazon Synod does not represent the Virgin Mary, according to a Vatican spokesman.

"Nobody said that it was the Virgin Mary," said Fr. Giacoma Costa, communications official for the Holy See, laughing. "I don't know who might have said so."

The remarks were made at Wednesday's press briefing in response to questions from LifeSiteNews.

"I think it's just a female figure that has no sacred nor pagan value," Costa added.

And they bowed down and worshipped this statue. They are clearly admitting they have committed idolatry. https://t.co/lQmM5SQbQg

"It represents life through a woman," he claimed, rejecting the notion that it is a pagan symbol, also clarifying that he was speaking in his personal capacity and not as official Vatican spokesman.


The carved figure first made its appearance at the controversial tree-planting ceremony that took place in the Vatican Gardens on Oct. 4, the feast of St. Francis of Assisi, patron of the Amazon Synod. A number of commentators dubbed it the "Pachamama," a pagan fertility goddess representing Mother Earth, shown entirely nude and pregnant.

Papal apologists were quick to reject claims that it was a pagan fertility goddess, instead arguing it may represent the Virgin Mary. British journalist Austen Ivereigh criticized "some American media" at a synod press briefing last week for interpreting the wooden figure as a "pagan symbol of fertility," and asked the panel to clarify.

"We all have our own interpretations — the Virgin Mary, Mother Earth," answered a missionary bishop in the Amazon. "Probably those who used this symbol wish to refer to fertility, to women, to life ... the life present in the Amazonian peoples."

"I don't think we need to create any connections with the Virgin Mary or with a pagan element," he added, leaving members of the media more confused than clear on the question.

At #SinodoAmazonico Presser, @austeni asks about the image of the naked pregnant woman used at Synod; an Amazon missionary Bishop says it probably represents "fertility, woman, life" adding we "don't need to create any connections with the Virgin Mary or with a pagan element" pic.twitter.com/PHefa8Fjra

The image was processed in a canoe into St. Peter's Basilica by indigenous Amazonians on the first working day of the synod and laid down on the floor, along with other Amazonian artifacts, while members played instruments and sang tribal songs, before proceeding with the wooden figure to the synod hall and set down just in front of the podium, where an image of the figure remains throughout the proceedings.

The wooden figure currently rests in the church of Santa Maria in Traspontina, a stone's throw from St. Peter's Basilica, also displaying a controversial poster showing a partially nude Amazonian woman breastfeeding what appears to be a badger or a weasel.

The vice director of the Holy See Press Office, Cristiane Murray, advised media to send queries to the Pan-Amazonian Ecclesial Network (REPAM) as well as the Catholic Movement for Climate, which organized the tree-planting ceremony, for clarification on the figure's symbolism.
REPAM describes itself as a "Catholic Church network that promotes the rights and dignity of people living in the Amazon."
"It is a project of the nine Churches of the Amazon region, inspired by Pope Francis and backed by the Latin American Bishops' Conference, CELAM," the description continues.
A Brazilian source told Church Militant, however, that REPAM is at the forefront of pushing liberation theology and progressive ideology in the Church.