In August of 2017, InfoVaticana, a small Catholic news portal based in Madrid, Spain, was surprised to receive a letter from Baker & McKenzie, the second largest law firm in the world, demanding that InfoVaticana transfer its domain (www.infovaticana.com) to the Vatican Secretariat of State. The reason for the demand was that the Vatican alleges that it possesses exclusive property rights over the name of the physical center of the Catholic world. The letter stated that InfoVaticana had seven days to comply with this order and that failing to do so would result in an exceedingly expensive lawsuit.

InfoVaticana, which was launched in May of 2013, says that it is “a free and independent media that has the vocation to serve the Catholic Church and society.” It’s stated mission is to “deepen the denunciation of Christianophobia and the corruption that the Church uses, the rejection of the totalitarian impositions of the powerful LGBT lobby and the support of our brothers, the persecuted Christians.”

InfoVaticana has written articles critical of the homosexual influence in the Vatican, Pope Francis’s Amoris Laetitia, the Vatican’s scandalous handling of the Order of Malta, the provision of a medal to a radical pro-abortion politician, and many other concerns held by Catholics around the world.

In early 2017, InfoVaticana filed a trademark request for its name beside the Emblem of the Vatican State. It wasn’t long before InfoVaticana discovered that it could not trademark a national emblem, and so on March 27, 2017, it withdrew its trademark application and opted to trademark its name along with a more generic pair of crossed keys instead. 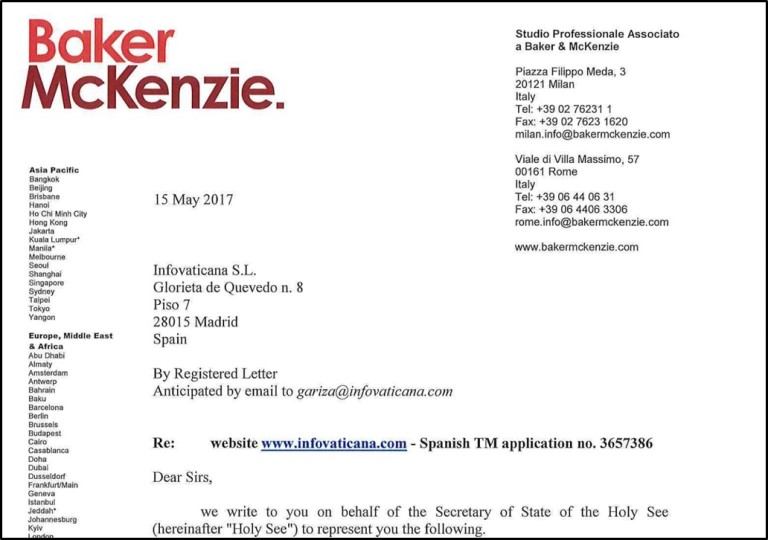 The trouble began two months later, when on May 15, InfoVaticana received a letter from Baker & McKenzie on behalf of the Vatican Secretary of State, Cardinal Pietro Parolin. The letter argued that the crossed keys “represent the symbolic emblem of the Christ Delivering Keys to St. Peter [and] are an integral part of the Emblem,” and when combined with the name “InfoVaticana,” the public may draw the “wrongful and misleading impression that the Website is officially linked or directly managed by the Holy See.” As such, the letter requests that InfoVaticana withdraw its trademark application and cease using the Emblem of the Vatican State and the combined image of InfoVaticana with the crossed keys.

In August of 2017, InfoVaticana received a second letter from Baker & McKenzie, this time demanding that in addition to no longer using the crossed keys with the name InfoVaticana, InfoVaticana actually cease using the name “InfoVaticana” at all and turn the website domain over to the Secretary of State. The letter argues that the crossed keys used in InfoVaticana’s application for its trademarked logo is a violation of the Vatican’s intellectual property in the form of “State Symbols.” Such argumentation would imply that any portion of the formal symbols representing Vatican City (the Cross, the keys, a tassel, a gold and white flag) are prohibited from use by any entity without express permission from the Vatican.