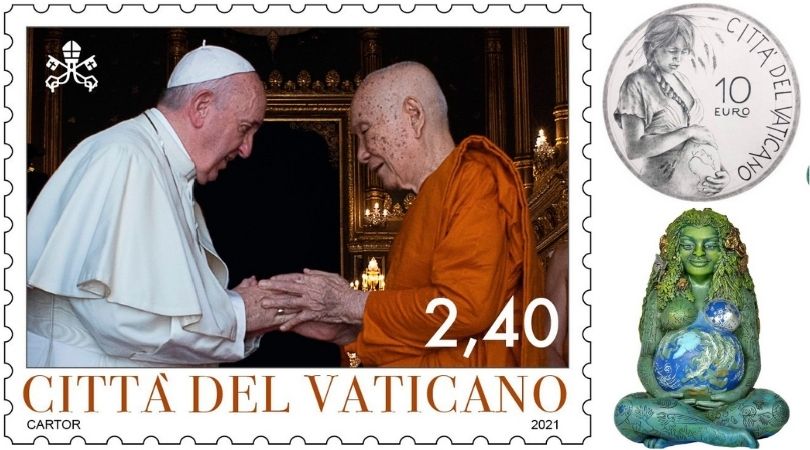 Publication comes on heels of outrage over 'Mother Earth' coin

The set of stamps, which is to be released on Feb. 22, boasts snapshots of Francis' meetings with leaders of the world's major religions over the past six years and marks the beginning of the ninth year of his pontificate.

The stamps illustrate Francis' new doctrine in his latest encyclical, Fratelli Tutti, that "the different religions, based on their respect for each human person as a creature called to be a child of God, contribute significantly to building fraternity and defending justice in society," according to the Vatican Philatelic Office.

The first two stamps in the top row celebrate the pope's encounters with representatives of the Abrahamic religions — with Rome's Chief Rabbi Riccardo Di Segni (January 2016) and with Grand Imam of al-Azhar Ahmed al-Tayyeb (February 2019).

At an in-flight press conference after visiting the Buddhist temple in Sri Lanka, reporter Christoph Schmidt asked Francis about the paradigm shift from evangelism to dialogue: "We know that Christian missionaries believed right up to the 20th century that Buddhism was a fraud, a diabolical religion."

"At that time, in catechesis, they told us that everyone was going to Hell! But I believe that the Church has become much more respectful — as I said during the interreligious meeting in Colombo — and appreciative," Francis responded.

Here, instead of Caesar, we have Pachamama, and hence have to give her what is due to her. And this because the Vatican so wills.

"When we read what the Second Vatican Council said about the values to be found in other religions, the Church has grown greatly in this regard," he stressed. "And this interreligious experience of fraternity, each always respecting the other, is a grace."

"I walk with the other. I don't try to make him come over to me, I don't proselytize," Francis said in August 2014, after meeting the bishops of Asia.

Religion scholar Jeffrey D. Long, who converted from Catholicism to Hinduism during his time at the University of Notre Dame, applauds Pope Francis' "specific and very clear rejection of proselytizing."

"My assessment of Pope Francis in this regard is that he does indeed give us reason to hope that his papacy will indeed mark a break with the past," writes Long in Pope Francis and Interreligious Dialogue: Religious Thinkers Engage with Recent Papal Initiatives.

"Pope Francis has given the world reason to believe that he is serious about uprooting the collective saṃskāra ("deeply rooted habits") of proselytization from his institution," Long remarks.

At that time, in catechesis, they told us that everyone was going to Hell! But I believe that the Church has become much more respectful.

At the end of his Wednesday general audience, Pope Francis praised the decision of the United Nations to mark an International Day of Human Fraternity on Feb. 4: "I am very pleased that the nations of the entire world are joining in this celebration aimed at promoting interreligious and intercultural dialogue."

The publication of the Vatican stamps promoting interreligious dialogue comes in the wake of the Vatican mint issuing a €10 silver coin depicting "Mother Earth" in October 2020.

While the Numismatic Chronicle interpreted the icon as Madre Terra (Mother Earth), the Vatican portrayed the image designed for World Earth Day by Bergamo-born sculptor and engraver Luigi Oldani as "a mother carrying the Earth, to which we owe care and love as if she were a daughter."

The Vatican commended the coin as representing, under the pontificate of Pope Francis, "a commitment to take care of the planet," the Numismatic Chronicle said.

Faithful Catholics responded with outrage, as the coin provoked memories of the veneration of figurines of the Andean earth-mother goddess at the Amazon Synod in 2019.

Italy's New Daily Compass lashed out: "Is the image of Mother Earth projecting the iconography of the Pachamama. A scandalous choice — the Catholic Church is paying tribute to a pagan divinity."

"Here, instead of Caesar, we have Pachamama, and hence have to give her what is due to her. And this because the Vatican so wills," the publication wrote, comparing the coin to the denarius in the Gospel of Matthew, which had Caesar's image on it.

"The Vatican denied all this, clarifying that the woman depicted is only a symbol of life. That's tantamount to saying that 'what's his name' is not a criminal, he's only a crook," the New Daily Compass quipped.