LIPA CITY, Philippines (ChurchMilitant.com) - The Vatican is reversing a bishop's ruling on an alleged apparition in the Philippines.

Archbishop Ramon Arguelles ruled in September 2015 the apparition of the Blessed Virgin Mary as Mediatrix of All Grace to a Carmelite nun in a convent in Lipa in 1948 was "of supernatural origin" and "worthy of belief." Ordinarily, the bishop in whose diocese the apparition takes place is responsible for investigating the claims of visionaries and the subsequent judgment, but in this case the Vatican is stepping in.

In a letter to his flock on May 31, he explains the Vatican declared his ruling "null and void." The Congregation of the Doctrine of the Faith (CDF) signed the decree on December 11 last year but for an unknown reason Abp. Arguelles saw a copy of the directive on Saturday May 28 and officially received it on May 30.

The document is signed by CDF Prefect Cdl. Gerhard Müller and his secretary Abp. Luis Ladaria.

The decision is based on an investigation and declaration released in 1951 signed by Pope Pius XII. It asserts the "the phenomena of Lipa were declared to lack supernatural origin. The Authority on which this declaration was made not that of the Bishop members of the Special Commission, but rather of the Supreme Pontiff [Pius XII]."

The directive further commands "any and all commissions studying the question of the alleged supernatural phenomenon of the alleged apparitions in the Carmel of Lipa be immediately disbanded."

A Special Commission of seven bishops was assembled to investigate events in 1948 where a Carmelite nun, Teresita Castillo, claimed to have seen the Blessed Mother. Others alleged to have seen the sun spinning and unexplainable showers of rose petals, some bearing holy images. In the seer's last vision she alleged the Blessed Virgin called herself the Mediatrix of All Grace.

After an initial investigation, the apparition was ruled to be fraudulent and the nuns commanded to destroy all items related to it, including a statue representing the apparition. However, instead of destroying the statue, the nuns hid it.

A seven-bishop committee ruled in 1951: "There was no supernatural intervention in the reported extraordinary happenings including the shower of rose petals in Lipa" and that the apparitions were to be disregarded "until a final decision on the matter [came] from the Holy See."

It is alleged that years later several of the bishops on the committee admitted — some on their deathbeds — they had been coerced to disavow the apparitions under threat of excommunication.

In 1992, Mariano Gaviola, archbishop of Lipa, lifted the ban on displaying the image of the Mediatrix of All Grace; the following year he declared his personal opinion that the Lipa apparitions were worthy of belief.

On November 12, 2009, Abp. Arguelles lifted the 1951 ban and formed a new commission to re-examine the alleged apparitions. In a 2010 statement he related,

Humbly, respectfully and joyfully, I must state that my November 12 decree does not in any way conflict with the final statement of the Holy See. ... First of all, the Holy See, while accepting officially the April 11, 1951 verdict about the Lipa apparitions, does not prohibit the spread of the devotion to Mary under the worthy title Mediatrix of All Grace.

He also maintained that new information that wasn't known or addressed in the earlier investigation has surfaced making the conclusions of the earlier commission "irrelevant."

Pope Francis is said to have venerated the statue on display at the archbishop's house when he visited the Philippines in January 2015.

Archbishop Arguelles finishes his letter: "My hope and prayer is that, this document notwithstanding, we will never doubt the love of God and the Blessed Mother for all of us, their zealous devotees from the entire world, but remain steadfast and determined to bring hope and blessings to many in this troubled world." 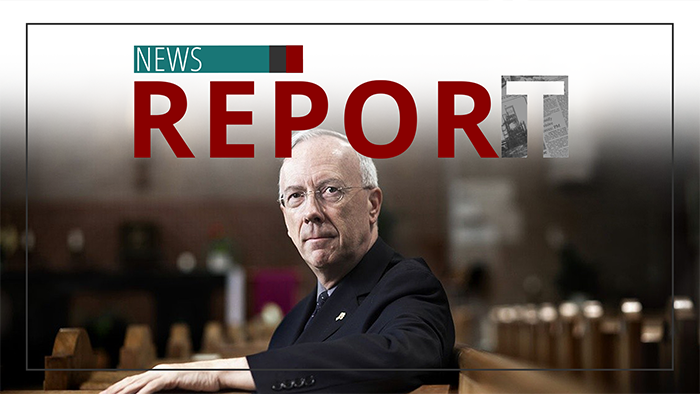