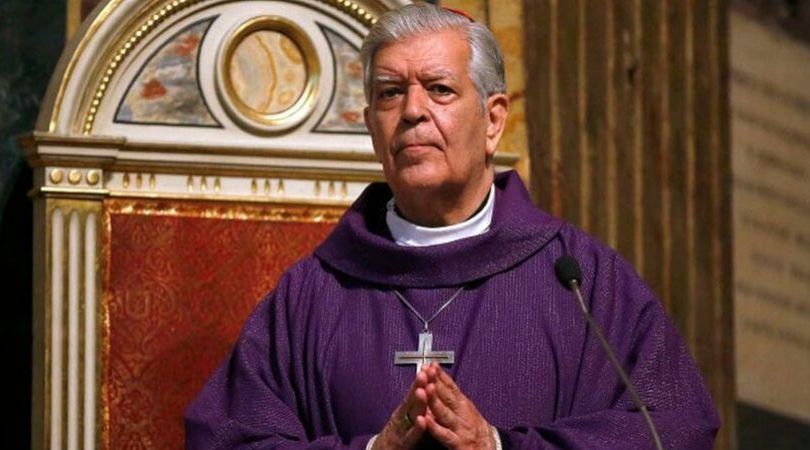 ROME (ChurchMilitant.com) - A Venezuelan cardinal has described Amazon Synod's working document as problematic and suffering from many ecclesiological weaknesses, including the misrepresentation of Jesus.

Cardinal Jorge Urosa, archbishop emeritus of Caracas, Venezuela, finds the working document, called the Instrumentum Laboris, "flawed" and "weak" in its representation of Jesus Christ as the Good Samaritan.

The document is intended to guide discussions during the upcoming synod of bishops and is divided into three sections: "Identity and Cries of the Pan Amazonia" (discusses the fundamental aspects of the social and cultural Amazonian reality), "Towards a pastoral and Ecological Conversion" (deals mainly with ecological and socioeconomic problems) and "New Paths for a Church with an Amazonian Face" (presents proposals of pastoral action).

According to Cdl. Urosa, the document contains a number of ecclesiological weaknesses.

One is that the document does not insist on "evangelizing and missionary issues." There is no analysis of the reality of the Church in the Amazon region, according to Cdl. Urosa, although there is an analysis of the "ecological, economic and cultural situation," adding that "Jesus Christ is not spoken of as the one who gives the explanation of the reality of man, as the Second Vatican Council says."

Another weakness is the disproportionate attention on the indigenous population to the exclusion of the urban population of the Amazon.

"There are millions living in cities like Manaus, Belen de Para, Iquitos" and "these people require a direct, explicit, open evangelization of Jesus Christ," he said. "The main work of the Church is evangelization, bringing the Gospel of Jesus Christ to the world, to all populations, both the indigenous and the urban population in the Amazon."

The cardinal finds the presentation of Amazonians as "an almost idyllic Amazonian population, the perfect man, the noble savage of Jean-Jacques Rousseau" as problematic. He said, "They are normal people, human beings with the same problems, virtues and defects as all people in the whole world."

Cardinal Urosa also sees reference to Jesus Christ as "the good Samaritan" as a problem.

"The good Samaritan is the person we have to imitate by helping others. Jesus Christ presented himself as the Redeemer, as the Way, the Truth and the Life, as the Resurrection, as the Light of the World," he said.

"Jesus Christ never presented himself as the good Samaritan," he added.

The prelate also takes issue with the document talking "a lot about accompanying, following, understanding and dialoguing with [people of the Amazon], but little about the need to announce the Gospel of Jesus Christ."

It is this perceived weakness that the cardinal says "explains the reality of the growth of the Pentecostal and Evangelical churches in the region, while the Catholic faith in the Amazon is not growing with the same force."

"From an ecological point of view," the document is "pretty good," Cdl. Urosa says.

The ecological aspect is interesting and makes a necessary defense of the Amazonian territory, the environment and the Amazonian populations that are not only indigenous, the cardinal cedes. They are being subjected to an extractive exploitation of raw material that is damaging the ecology of the region which has an impact on the entire world."

Urosa is not the only prelate to voice concern about the Instrumentum Laboris' theological shortcomings.

Cardinal Raymond Burke and Bp. Athanasius Schneider issued an eight-page declaration on Sept. 12, the Feast of the Most Holy Name of Mary, warning against "serious theological errors and heresies."

The implicit pantheism the American cardinal and Kazakhstani bishop felt was in the document inspired them to make the faithful aware of errors, including:

Cardinal Burke and Bp. Schneider have called for prayer and fasting to prevent the errors from being approved, proposing that clergy and laity "pray daily at least one decade of the Holy Rosary and ... fast once a week" for 40 days from Sept. 17 to Oct. 26.

Cardinal Uroso was not invited to attend the synod. Eight prelates from Venezuela will attend, including Cdl. Baltazar Porras, Urosa's successor as archbishop of Caracas. Cardinal Porras was chosen by Pope Francis to be one of three delegate-presidents of the synod.

Cardinal Urosa, 76, retired as archbishop of Caracas in July 2018.

Despite its name and emphasis on the Amazon region, the synod is being held in Rome Oct. 6–27. In addition, according to a Vatican website, although the theme refers to a specific region, the proposals "go beyond the geographical territory, since they cover the whole Church and refer to the future of the planet."