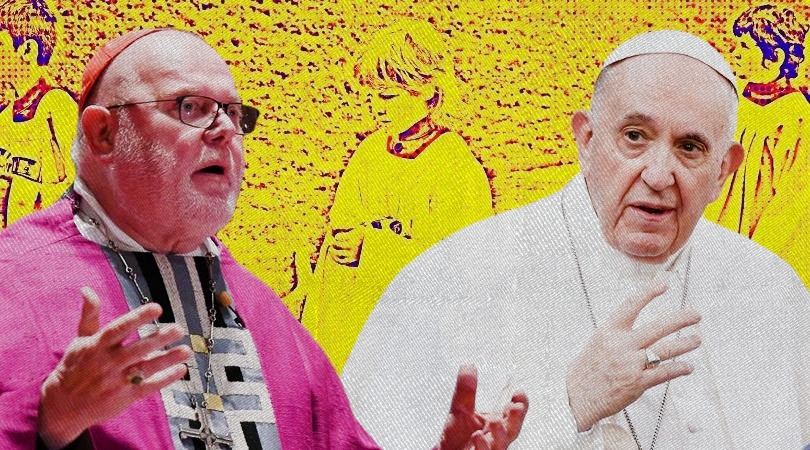 MUNICH, Germany (ChurchMilitant.com) - Victims of clerical sex abuse in Germany are shaming Pope Francis for rejecting Cdl. Reinhard Marx's resignation and asking the disgraced prelate to continue as archbishop of Munich and Freising.

Catholic victims' association Eckiger Tisch called it "particularly frightening" for the pope "to relativize the responsibility for abuse of power and abuse cover-up by bishops worldwide by referring to the fact that, in the past, there were 'different times.'"

Francis "is now simply moderating this shocking insight and thereby saving his own office," philosopher Matthias Katsch, spokesman for the survivors' group, told Church Militant in a statement Wednesday.

"Marx aimed his statement at the responsibility of all bishops, including the bishop of Rome, for the system of abuse and cover-up exonerating his own office," Katsch explained. The philosopher is a survivor of sex abuse.

"At any rate, little remains of the radical new beginning that Cdl. Marx's letter of resignation hinted at," Katsch lamented, noting that the pope had taken "the force out of Cdl. Marx's offer to resign."

"Perhaps it is time for Francis to start speaking in the first person so that he can be better understood," the philosopher remarked. "The pope should finally begin to really listen to those affected."

Survivors and victims are "really tired of having to serve in internal Church power struggles and Church political disputes between supposed reformers and conservatives," he added.

Speaking to Church Militant, Richard Scorer, specialist abuse lawyer at Slater and Gordon noted "the pope's rejection of Cdl. Marx's resignation strongly suggests this saga has just been a pantomime."

Scorer, who represented dozens of clergy abuse victims before Britain's Independent Inquiry into Child Sexual Abuse, said Marx's "fake resignation" is "designed to create the impression of accountability at senior levels in the Church whilst in reality maintaining the status quo."

The letters between the pope and Marx are peppered with pompous references to taking 'responsibility,' which is just a euphemism for dodging it.

"If the Church is genuinely going to change, then there needs to be real accountability at the top," Scorer elaborated. "But, yet again, Pope Francis has prevented this from happening, no doubt because once the principle is established that senior figures have to take responsibility for their actions, questions would arise about the pope's own position."

American Catholic commentator George Neumayr observed, "The letters between the pope and Marx are peppered with pompous references to taking 'responsibility,' which is just a euphemism for dodging it. The pope's open orchestration of the exchange ... punctuates the phoniness of it all."

Historian Thomas Großbölting told Der Spiegel that, as a "high functionary of the Catholic Church," Marx "is deeply involved in this perpetrator institution" as "he has been in a leading position in the Church for many years and decades."

Großbölting, who is leading an independent inquiry for the diocese of Münster, said Francis' rapid response in rejecting Marx's resignation "suggests that there had probably been agreements in advance both on the resignation of Marx and the reaction of the pope."

The pope's rejection of Cdl. Marx's resignation strongly suggests this saga has just been a pantomime.

Citing Francis' own words: "good resolutions are not enough. You also must 'put the meat on the grill,'" Frank blasted the pontiff for not acting on his own platitudes.

"The whole thing now looks like a piece from the Jesuit theater about guilt and atonement and the ability to suffer," the journalist remarked. "The episcopate is neither a torture chamber for martyrs nor a gym for spiritual exercises and pious self-empowerment."

"Anyone who has abused the power of the office or acted irresponsibly must, as an official, be responsible for it. Resigning is therefore the appropriate and just response. It is also a sign to the victims," added Frank.

Fleischmann noted that this was a "veritable relief" for other senior prelates like Cologne archbishop Cdl. Rainer Maria Woelki, who has been accused of abuse cover-up and has personally appealed to Pope Francis to review his conduct.

"The whole thing is justified by the pope with the knowledge that all people are sinners and, as such, are nevertheless called to serve in the Church," Fleischmann wrote. "The Christian doctrine of sin and forgiveness thus becomes meaningless to people, or worse, highly suspect doctrine when misused."

"If the forgiveness of sins simply means going on with no apparent consequence, then this will further damage the credibility of the Church and the Christian message," he added.

Earlier, Katsch commended Marx for resigning, noting the cardinal "understood that those who dragged the cart in the mud couldn't pull it out again."

Should more personal mistakes emerge, Marx has a papal carte blanche in advance.

"The cardinals and bishops are the ones who have led the global Church into this crisis, and so it is right that one of them should now take personal responsibility for it, regardless of the question of what breaches of duty he himself is accused of," Katsch asserted.

Marx submitted his resignation to Pope Francis on June 4, stating the Catholic Church "as a whole" is at a "dead end." A week later, Francis wrote to Marx in Spanish, rejecting the cardinal's resignation.

Francis even compared the cardinal's resignation to Jesus dying on the Cross: "This is the path, the one that you yourself, dear brother, assume when you present your resignation."

Eckiger Tisch was founded in April 2010 as an initiative of victims of sexual violence in Jesuit schools in Germany. Eckiger Tisch is German for "angular table" and was chosen as a provocative counterpoint to the "Round Table on Sexual Child Abuse" launched by the German government in 2010, in which those affected were not involved.

While the MHG Study published by the German Bishops' Conference in September 2018 identified 3,677 victims and 1,670 priests as abusers, it failed to identify the perpetrators, where these acts took place and specific relationships involved.

The study found that more than half of the victims were then above the age of 13 and the majority were male, leading to the unaddressed conclusion that homosexual predators in the priesthood were responsible for the abuse.

Almost 1,000 of the victims were altar boys. Every sixth attack involved rape.

However, a more recent study by scientists at the Ulm University Hospital revealed over 100,000 people have been affected by sexual abuse by Catholic priests in Germany.

According to the study, the Protestant Church is just as badly affected as the Catholic Church.