SAGINAW, Mich. (ChurchMilitant.com) - Victims took to the stand in emotionally charged testimony Wednesday against Saginaw priest Fr. Robert DeLand, arrested in February for gay sexual assault. Since his arrest, the Saginaw County prosecutor’s office has launched a criminal investigation into the diocese for possible cover-up of sex abuse, resulting in a raid on Bp. Joseph Cistone's home as well as the cathedral and chancery. Multiple priests are now implicated in the criminal probe.

As DeLand sat stony-faced and silent in Judge David Hoffman's courtroom, the first victim — a Mexican Catholic raised in the foster care system — spoke of how the priest took him under his wing and seemed to show interest in his welfare.

“It just made me feel grateful that there was a person out there helping out,” the victim said, getting emotional. He recounted how the priest also offered him money, cigarettes and alcohol over the course of months.

His voice broke when he discussed the attempted sexual assault that took place on the night of his 21st birthday at DeLand’s private condominium. After the priest poured the young man several shots of tequila, the victim remembers blacking out.

“When you drink, you just steadily feel yourself going drunk,” he said. “I didn’t feel this way at all. I just went black.” He suspected the tequila was laced with a drug.

When he came to, DeLand tried to “make out” with him. After another blackout, the victim awoke to find his pants “were down at his ankles,” as were the priest’s, who took the victim’s hand and pushed it toward the priest's groin. The victim pulled his hand back and blacked out a third time.

The prosecutors replayed a video from August 2017 showing the victim — at times breaking down and sobbing — confronting DeLand on the phone, and DeLand repeatedly claiming ignorance of what took place that night.

“You don’t deserve to be a priest at all,” the victim wept. “You literally took advantage of your position. That’s the only reason I trusted you at all.”

The priest claimed he could not remember what took place at his condo, but acknowledged he had made 15 phone calls to the victim that night. DeLand also admitted he believed the victim was telling the truth and felt “terrible.”

“I believe you in what you say. If I took advantage of you, I don’t remember that, but I believe you because you don’t lie,” DeLand said in the video, “and I know that, and you don’t lie … and I just am so stupid, I guess.”

During cross-examination, DeLand’s attorney Alan Crawford tried to build the case that the victim was “hallucinating” or “dreaming” the sexual assault. After the testimony, Judge David Hoffman accepted the prosecutor’s charges of criminal sexual conduct and gross indecency.

After a brief recess, the prosecutor called the 17-year-old male victim to the stand, currently in the 10th grade. He explained that he had met Fr. DeLand last year, where the priest was a hallway monitor at Freeland High School. The victim was then grieving the loss of a friend who had committed suicide, and DeLand took a deep interest in him, offering to pay for his counseling sessions, as well as giving him money, cigarettes and alcohol.

When the young man’s parents went to police expressing concern over grooming behavior by the priest, the victim agreed to take part in a covert operation. Recorded conversations where the victim feigned he was homosexual reveal that DeLand allegedly told him, “It’s OK. This is how God created you.”

Conversations continued after that point “almost relentlessly involving gay sex and homosexuality,” Berg continued. “It appears to me that Fr. Bob was encouraging homosexual behavior, not heterosexual behavior.” Berg, a former Catholic, acknowledged that Catholic doctrine teaches that homosexual conduct is wrong and that he would expect a Catholic priest to live up to that teaching rather than encourage the opposite behavior.

The judge also agreed to bind over the charge of criminal sexual misconduct in this case.

Preliminary examinations continue Friday at the Saginaw County Courthouse at 1:45 pm, where the third victim will take the stand. The alleged abuse in this case led to DeLand's second arrest in early April on further charges of sexual assault. Since that time, DeLand has been released on GPS tether and is confined to his condo — an order he is fighting in court.

Assistant Prosecutor Mark Gaertner confirmed that the evidence seized from the March 22 raids has not yet been examined. A special team will be brought in next week to start going through the material, including the electronic equipment seized from the bishop's home. 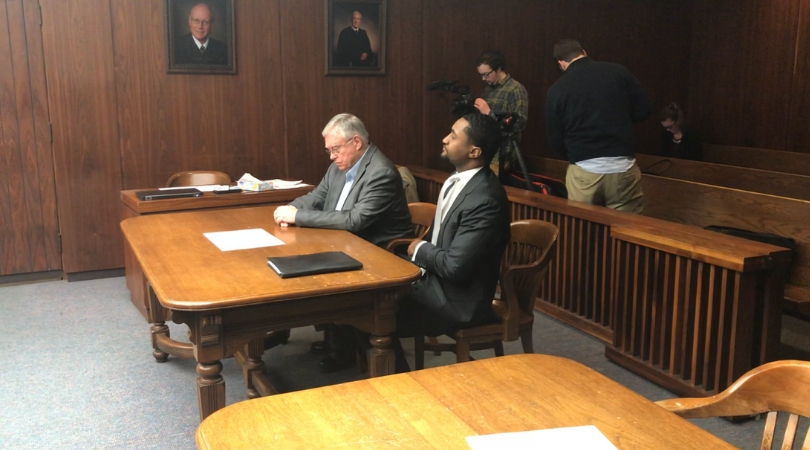