Vatican whistleblower: Moral compromise a 'prostitution of the soul'

VATICAN CITY (ChurchMilitant.com) - Archbishop Carlo Maria Viganò has issued another warning to his brother bishops, telling them that those who yield to the "dictatorship of current opinion" prostitute their souls.

After urging Catholic prelates to "be wary of keeping silent" in the face of error on Sunday, the Vatican whistleblower released a follow-up exhortation, telling Italian journalist Aldo Maria Valli that bishops must guard against moral compromise.

"We have seen all the news broadcasts about the new cardinals who have visited the pope emeritus, led by Pope Francis," said Viganò.

"The images of the two popes together with the new cardinals, purposely wanted and widely circulated, have once again a mystifying instrumental function," he observed.

This function, the archbishop suggested, was "to show the complete harmony and continuity of the magisterium of the two popes. It has also been reported that Pope Benedict advised the new cardinals to be faithful and obedient to the Pope."

"In reparation for the ignoble abuse committed against the pope emeritus and the unworthy exploitation of his image," Viganò continued, "it seems to me fitting and proper that the bishops gathered in the Synod for the Amazon to protect the 'Mother Earth' ... may also receive a word from Pope Benedict XVI, this time one that is authentic."

The archbishop recounted a homily Benedict XVI gave to members of the International Theological Commission on Oct. 6, 2006.

"And our speech and thoughts must always serve to ensure that what God says, the Word of God, is listened to and finds room in the world," Benedict declared. "Thus, once again we find ourselves invited to this process of forfeiting our own words, this process of purification so that our words may be nothing but the instrument through which God can speak."

In this context, a beautiful phrase from the First Letter of St. Peter springs to my mind. It is from verse 22 of the first chapter. The Latin goes like this: "Castificantes animas nostras in oboedentia veritatis." Obedience to the truth must "purify" our souls and thus guide us to upright speech and upright action. In other words, speaking in the hope of being applauded, governed by what people want to hear out of obedience to the dictatorship of current opinion, is considered to be a sort of prostitution: of words and of the soul.

"The 'purity' to which the Apostle Peter is referring means not submitting to these standards, not seeking applause, but rather, seeking obedience to the truth," he continued.

"And I think that this is the fundamental virtue for the theologian, this discipline of obedience to the truth, which makes us, although it may be hard, collaborators of the truth, mouthpieces of truth," observed Benedict.

"[F]or it is not we who speak in today's river of words, but it is the truth which speaks in us, who are really purified and made chaste by obedience to the truth," he added. "So it is that we can truly be harbingers of the truth."

Viganò's back-to-back exhortations are the latest in a series of warnings the archbishop has issued in the past few months.

Viganò's back-to-back exhortations are the latest in a series of warnings the archbishop has issued in the past few months.

In June, he declared that "a corrupt 'mafia' has taken control of many institutions of the Church, from the top down, and is exploiting the Church and the faithful for its own immoral purposes."

In August, Viganò warned that "Christ is absent" from the Amazon Synod's working document, and in September, he described "the 'new paradigm' of Pope Francis" as "a 'new church'" in the making. 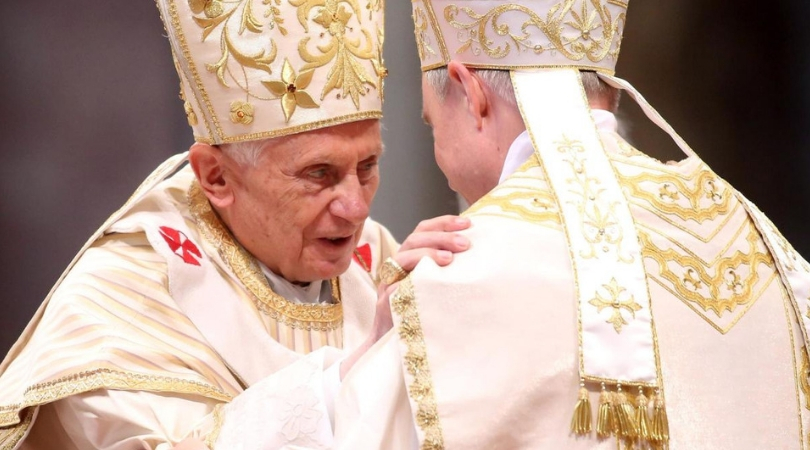