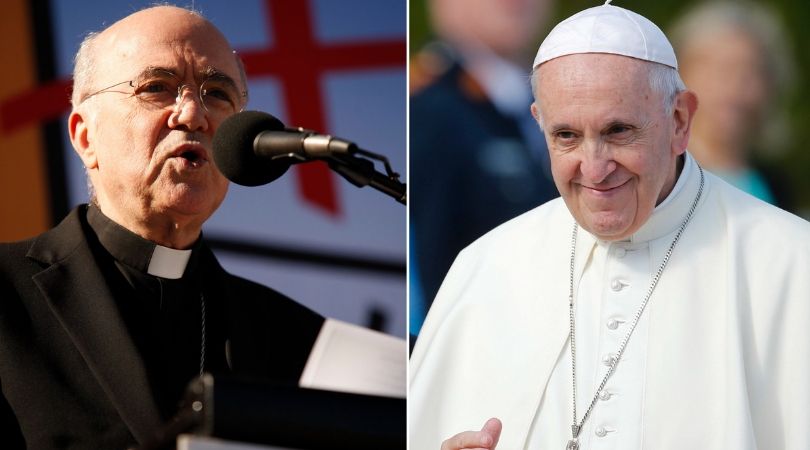 Vatican whistleblower Abp. Carlo Maria Viganò is reaffirming that Pope Francis presented a threefold lie in denying he had any knowledge of Theodore McCarrick's homosexual predation.

In his full 8,000-word interview with The Washington Post published on Tuesday, Viganò identifies three lies Pope Francis seemingly perpetrated in telling a Mexican journalist last month that he "several times" had stated he "did not know anything" about McCarrick's objectionable past and in claiming, "I do not remember if he [Viganò] told me about this."

"We are in a truly dark moment for the universal Church," Viganò told The Washington Post. "The Supreme pontiff is now blatantly lying to the whole world to cover up his wicked deeds!"

"All these three are blatant lies," says Viganò.

The former papal nuncio to the United States recounts the pope proclaiming last year that he would "not say a word about my testimony." He now claims "he has already replied many times" to my testimony, adds the archbishop.

Viganò then drives home his point: "So, either he spoke or he kept silent. Which is it?"

The archbishop next addresses the pope's claim of knowing nothing about McCarrick's nefarious past.

"Second, everybody knew about McCarrick's lifelong predatory behavior, from the youngest seminarian in Newark to the highest-ranking prelates in the Vatican," notes Viganò.

Finally, he questions how any supreme pontiff could forget when a nuncio tells him about a cardinal corrupting generations of priests and seminarians.

Third, I repeat in front of God what I stated in my testimony from last August: On June 23rd, 2013 Pope Francis himself asked me about McCarrick, and I told him that there was a huge dossier about his abuses at the Congregation of Bishops and that he corrupted generations of seminarians. How could anybody, especially a pope, forget this?

Watch the panel discuss Viganò's bombshell interview with The Washington Post in The Download—Viganò on 'Corrupt Mafia.'