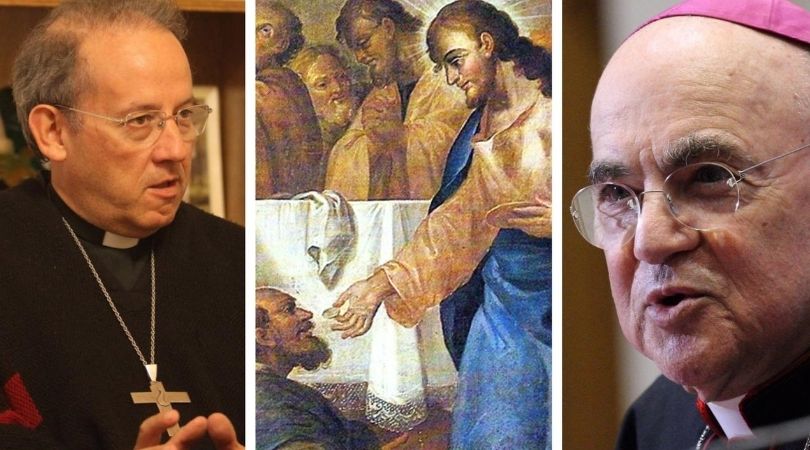 ROME (ChurchMilitant.com) - Vatican whistleblower Abp. Carlo Maria Viganò is denouncing a bully bishop for his "deplorable abuse" in shutting down a "flourishing" seminary in Argentina to punish priests for administering Communion on the tongue.

In a blistering letter dated July 30, the former papal nuncio to the U.S. excoriates Eduardo María Taussig, bishop of San Rafael, for closing "the largest seminary in Argentina" and dispersing the seminarians "in order to re-educate them elsewhere, in seminaries that are so exemplary that now they are empty."

Viganò, now living in hiding for fear of his life, notes that the seminary of Santa María Madre de Dios was shut by the Vatican Congregation for the Clergy "at [its] zealous insistence."

"Despite the relentless work of ultra-modernist indoctrination that has been carried out in the past few decades," Viganò applauds "courageous priests" like seminary rector Fr. Alejandro Miguel Ciarrocchi "who do not place the obeisance of the episcopal court ahead of the respect that is owed to the Blessed Sacrament."

Bishop Taussig sacked Fr. Ciarrocchi for defending the right of his seminarians to receive Communion on the tongue, replacing him with Peruvian Fr. Víctor Torres Jordán as the new interim rector "who has the confidence of the bishop."

"I can imagine your vexation in seeing that the lay faithful and even entire families" in the diocese, "are following the good shepherds" and "not the mercenaries who have 'no concern for the sheep' (John 10:4,13)," Viganò tells Taussig, noting that God who is present in the Blessed Sacrament "asks the Sacred Pastors to be His witnesses, not His betrayers and persecutors."

I pray that you will understand how serious your action is.

I pray that you will understand how serious your action is, considered sub specie aeternitatis [from the perspective of the eternal], both in itself and also because of the scandal it causes to the little ones. Your studies at the Angelicum [the pontifical college in Rome] ought to help Your Excellency in this work of healthy repentance, which also imposes sub gravi [under pain of mortal sin] the duty of reparation.

Viganò, who in June issued a historic open letter to Donald Trump commending the president for fighting "the deep state," compares Taussig's abuse with a recent sacrilege in the Swiss diocese of Basel where a "woman wearing sacred vestments regularly simulates the celebration of the Mass, in the absence of an ordained priest, omitting only the words of the consecration."

Woman simulates celebration of the Mass in Swiss diocese of Basel, omitting words of consecration

"I wonder whether Bp. Felix Gmür of Basel will distinguish himself with the same zeal that you have, having recourse to the Roman dicasteries to punish in an exemplary way the sacrilegious simulation of the Mass. I fear, however, that the inflexibility you have demonstrated in punishing the priests who have dutifully disobeyed you will not be emulated in Switzerland," Viganò laments.

Your studies at the Angelicum ought to help Your Excellency in this work of healthy repentance.

The archbishop further rebukes Taussig for acting contrary to the motto paterna atque fraterna charitate [paternal and fraternal charity] on his episcopal coat of arms: "I see nothing paternal about punishing priests who do not want to profane the Sacred Host, nor any form of true charity towards those who have disobeyed an inadmissible order."

"Charity is exercised in service of the good and the true: If it has error as its origin and evil as its end, it can only be a grotesque parody of the virtue," Viganò observes.

Church Militant reported Thursday that outraged laity had blasted Bp. Taussig as one who had "enlisted in the ranks of the enemy" instead of being a shepherd and guide.

"We want to communicate to you that just as Our Lord warned us, we are attentive to the true doctrine so as not to be confused by the 'false christs' and also warned that the 'tares' grows next to the wheat and will only be cut and separated on 'the day of harvest,'" the laity of San Rafael wrote in an open letter to Taussig.

On July 3, Catholics assembled at the front gate of Santa María Madre de Dios seminary to prayerfully protest Taussig's refusal to allow Communion on the tongue.

A diocesan press statement assures laity that "the bishop, along with the [new] rector and the formators, will accompany the seminarians on a journey of discernment, throughout this semester, in order to locate them, in a timely manner, in various seminaries of the country in order to ensure that they can continue their formation to the priesthood."