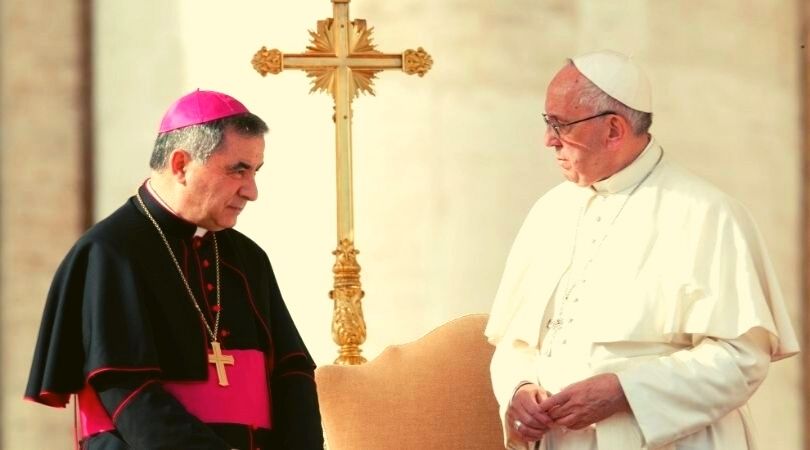 Much has been written in recent days about yet another Vatican scandal, this time involving Cdl. Angelo Becciu, prefect of the Congregation for the Causes of Saints. Faced with accusations that still have to be proven, Jorge Mario Bergoglio's response seemed to be dictated more by anger than by love of truth, more by a delusion of omnipotence than by the will for justice — in any case, by a serious, despotic abuse of authority.

From this point of view, we can now believe that the deprivation of the sacred purple and the reduction to the lay state have become summary executions, with a very strong media impact in favor of the image of those who inflict them, beyond the real moral and criminal responsibilities of the condemned.

Mr. Theodore McCarrick, accused of very serious crimes, was directly condemned by the Pope, without the trial documents and testimonies concerning him being made public.

However, with this ploy, Bergoglio wanted to project an image of himself that contrasts with the reality of the facts, since his stated desire to "clean up" the Vatican does not correspond to the fact of his having surrounded himself with widely compromised characters — e.g., McCarrick — giving them official assignments, then kicking them out as soon as their scandals were exposed.

And on all of them, as those who work in the Curia know well, already weighed serious suspicions, if not even any detailed evidence of guilt.

The operation we have been witnessing for the past seven terrible years is clearly aimed at the destruction of the Catholic institution.

In confirmation of this instrumental method, indeed of the ruse of the Bergoglian moralizing action, there are the cases of upright and completely innocent people who have not been spared the infamy of discredit, media exposure, judicial pillory: Let us just think of the case of Cdl. George Pell, abandoned to himself in a sham trial set up by an Australian court, and for which the Holy See refrained from any intervention that would have been its duty.

In other cases, such as that of Bp. Gustavo Zanchetta, Bergoglio spent himself in an all-out defense of his protégé, even going so far as to accuse the victims of the prelate of perjury and promoting him to a position of high responsibility (that was specifically created for him) at the Administration of the Patrimony of the Apostolic See ("APSA"). And today, Bp. Nunzio Galantino and Zanchetta are de facto administrators of the entire patrimony of the Holy See and now also of the portfolio of the Secretariat of State. And what about unpresentable characters like Cdl. Tarcisio Bertone and Cdl. Óscar Maradiaga, Abp. Edgar Peña Parra and Abp. Vincenzo Paglia? Living scandals!

Birds of a feather stick together.

Let us, therefore, leave aside the innocent and guilty, united by the lynching artfully induced by those who wanted to get rid of them or because they had shown themselves not very inclined to compromise, or because their zeal for the cause of Santa Marta had led them to a dangerous ease in a certainty of impunity.

Birds of a feather stick together.

People of mirrored honesty and great faith such as Ettore Gotti Tedeschi or Cdl. Pell, without forgetting Eugenio Hasler and the mere executors of Becciu in the Secretariat of State, were treated worse than a serial abuser like Theodore McCarrick or a (presumed) manipulator like Becciu.

It is to be believed that the annoyance of having honest and incorruptible collaborators led to their expulsion, just as the blackmail of immoral and dishonest collaborators was considered a sort of guarantee of their loyalty and their silence. Time has shown that honest men have suffered injustice with dignity without discrediting the Vatican or the person of the Pope; it is to be believed that, on the other side, the corrupt and the vicious will, in turn, resort to blackmail against their accusers, as courtiers without honor have always done.

In this recent event, the constant theme that can be seen is the attitude of Santa Marta, which has been compared in many quarters to that of a South American junta. I believe, instead, that behind this dripping of scandals involving prominent personalities of the Hierarchy and Roman Curia, there is the deliberate will to demolish the Church herself, to discredit her before the world, to compromise her authority and credibility before the faithful.

The operation we have been witnessing for the past seven terrible years is clearly aimed at the destruction of the Catholic institution through the loss of credibility, disaffection and disgust for the actions and unworthy behavior of its members. It's an operation that began with the sexual scandals that originated in the previous pontificates but which, this time, is to be seen as the protagonist, as the main actor is precisely the one who sits on the throne, and who, with his own words and works, is able to deal the most devastating blows to the papacy and the Church.

The "demythologization of the papacy" advocated by progressives essentially consists in its ridicule, in its profanation (that is in making it profane, not sacred). And it is unheard of and very serious that this subversive operation is carried out by those who hold the papacy and wear its robes — albeit awkwardly. Similarly, the profanation of the Church is carried out with a scientific method by the very leaders of the Hierarchy, who make themselves disliked by the people of God and are pitied by the world, under the smug gaze of the mainstream media.

This modus operandi is not new. It was adopted — with less media impact but still with the same purposes —– on the eve of the French Revolution.

The 'demythologization of the papacy' advocated by progressives essentially consists in its ridicule, in its profanation (that is in making it profane, not sacred).

Making the aristocracy hateful, corrupting the nobility with vices unknown to the people, eradicating the sense of moral responsibility towards the subjects, causing scandals and fomenting injustice towards the weakest and the poorest, enslaving the ruling class to the interests of sects and lodges: This was the premise, artfully created by Freemasonry, to arouse the discredit of the monarchy and legitimize the revolts of the masses, prepared by a few seditious in the pay of the lodges.

And if the nobles did not fall into the traps of vice and corruption, the conspirators could accuse them of the wickedness of others and condemn them to the gallows under the pressure of hatred cultivated among the rebels, among the criminals, among the enemies of the king and of God — a mob of infamous ones that had nothing to lose and everything to gain.

Today, after more than two centuries of a tyranny of revolutionary thought, the Church is the victim of the same system adopted against the monarchy. The aristocracy of the Church is as corrupt as (and perhaps more than) the French nobles and does not understand that this vulnus to its reputation and authority is the necessary premise for the guillotine, the massacre, the fury of the rebels and also to terror.

Let the moderates think carefully that a future Pope only slightly less progressive than Bergoglio can sedate souls and save the papacy and the Church. Because the theological hatred of God's enemies, once the good shepherds have been eliminated and the faithful removed, will not stop before those who today deplore the present pontificate but defend its conciliar matrix: The conservatives who believe they can distance themselves so much from modernists as well as traditionalists will end up like the Girondins.

"Mundamini, qui fertis vasa Domini" says Wisdom (Isaiah 52:11). The only way to get out of the crisis of the Church, which is a crisis of faith and morals, is to recognize the deviation from the right path, retrace the path taken and take the path that Our Lord marked with His Blood: The way of Calvary, of the Cross, of the Passion.

When the shepherds will not have the smell of the sheep but rather the sweet perfume of the Chrism with which they have been made similar to the High and Eternal Priest, they will be conformed again to the divine model of Christ, and, with Him, they will know how to sacrifice themselves for the glory of God and the salvation of souls.

Nor will the Divine Shepherd make them lack His Grace. As long as they want to please the world, the world will compensate them with its deceptions, its lies, its most abject vices. The choice, after all, is always radical: Eternal glory with Christ or eternal damnation far from Him.