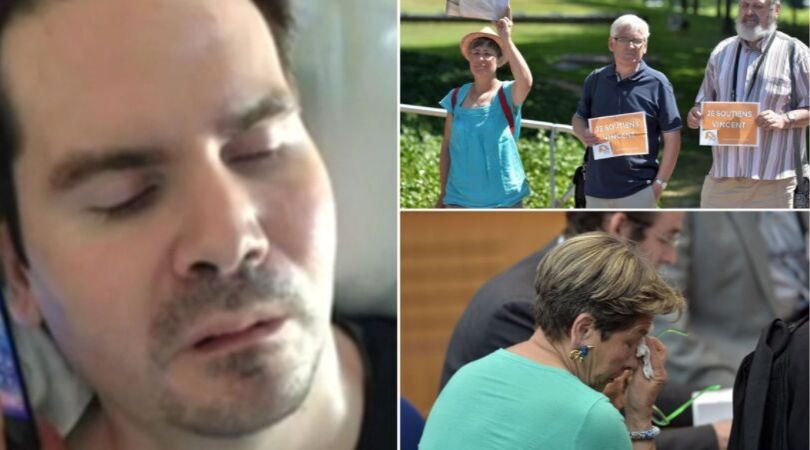 REIMS, France (ChurchMilitant.com) - Vincent Lambert, 42, the quadriplegic and brain-damaged man at the center of more than a half-decade long legal battle, has died from what is being called "passive euthanasia" — depriving him of food and hydration under heavy sedation — in Sebastopol Hospital in northeastern France.

Catholics worldwide have offered up prayers on behalf of Lambert's cause.

Pope Francis, for example, tweeted: "Let us pray for the sick who are abandoned and left to die. A society is humane if it safeguards life, every life, from the beginning to its natural end, without choosing who is worthy of living or not. May doctors serve life and not take it away."

May God the Father welcome Vincent Lambert in His arms. Let us not build a civilization that discards persons those whose lives we no longer consider to be worthy of living: every life is valuable, always.

We pray for the sick who are abandoned and left to die. A society is human if it protects life, every life, from its beginning to its natural end, without choosing who is worthy to live or who is not. Doctors should serve life, not take it away.

He also tweeted: "We pray for those who live with severe illness. Let us always safeguard life, God's gift, from its beginning until its natural end. Let us not give in to a throwaway culture."

"[It] is now the time for contemplation, for compassion, and for prayer for Mr. Vincent Lambert. Either today or tomorrow I suggest that you celebrate Mass for his intention and entrusting him to the Lord, the God of mercy. This intention can also be extended to all of his relatives."

Aupetit compared Lambert's condition with that of Germany's Michael Schumacher, the seven-time world champion Formula 1 driver who retired in 2013 after sustaining similar brain injuries to Lambert in a skiing accident. Lambert's head injuries occurred in a motor vehicle accident.

Let us not give in to a throwaway culture.

Cardinal Robert Sarah commemorated Lambert in a tweet quoted by the United Kingdom-based Catholic publication The Tablet in which he states in a translation from French:

On this sad day, I pray for the eternal repose of the soul of Vincent Lambert, who died as a martyr, victim of the terrifying madness of the people of our time. I pray for his family and in particular for his parents so courageous, so dignified. Let us not be afraid. God is awake and watching. Robert Sarah.

The publication quotes Lambert's mother as saying in May: "Vincent is doing well. He's not at the end of his life. … He only needs something to drink and to eat and some love."

Doctors removed feeding and hydration tubes from Lambert on July 7, actions that had been opposed legally by Lambert's Catholic parents and two of his siblings.

Viviane Lambert, Vincent's mother, argued Vincent was disabled but not terminal. Although his condition was labeled vegetative by his doctors and his wife, he reportedly responded to external stimuli and could breathe without a respirator.