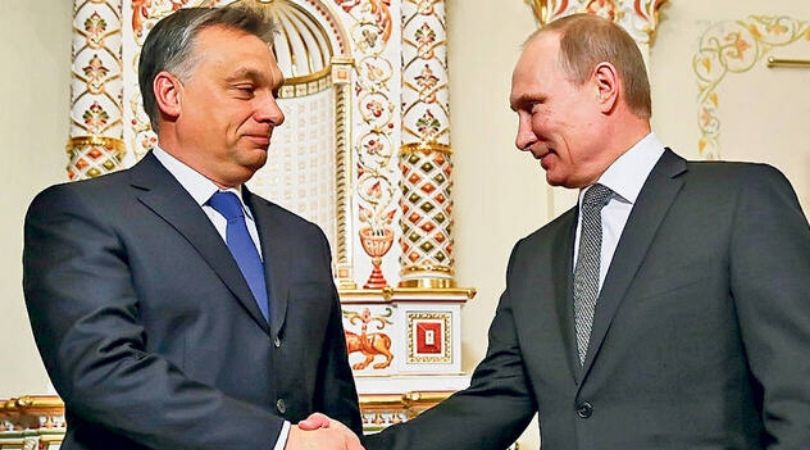 Putin: Middle East is 'the cradle of Christianity'

While much of the Western world responds to persecution of Christians in the Middle East by dithering (at best), prominent Eastern Europe politicians and members of the Trump administration are forcefully speaking out and backing up words with actions.

This past October, the Hungarian government organized a conference of high-ranking clergy and leading Christian figures from the Middle East, at which Hungary's Minister of Foreign Affairs and Trade, Péter Szijjártó, emphasized that for the mainstream of Europe's contemporary political establishment, "persecution of Christians is the last acceptable form of discrimination" — despite the fact that the numbers show Christianity to be the most persecuted religion in the world, castigating such attitudes as "supreme hypocrisy."

Persecution of Christians is the last acceptable form of discrimination.

He also argued that "the ideology-based export of [liberal] democracy" to the Middle East has led to the instability at the root of the migrant crisis which Europe is now facing and actually enabled radical Islamist groups to gain power, leading to increased persecution of Christians.

Russian President Vladimir Putin and Hungarian Prime Minister Viktor Orban both addressed the conference, which was held in conjunction with a political summit between the two heads of government and at which the condition of Middle Eastern Christians was a major topic of discussion.

While Orban limited his remarks to a matter-of-fact declaration that the conference was being held to advise the politicians taking part in the summit, Putin highlighted the gravity of the situation, stating that "although the Middle East is the cradle of Christianity, the position of Christians in the region is very difficult, with murder, violence and plunder" and that "[t]his is an alarming development ... because our identity is based on the Christian culture. ... It is hard to watch what is happening to Christians in the Middle East."

He added, "Russia will do everything to protect Christians. ... We must help them restore and preserve their Holy Sites, preserve their congregations."

Russia will do everything to protect Christians.

Only a month later Orban spoke at the second International Conference on Christian Persecution, emphasizing that "four out of five people persecuted for their faith are Christians and some 245 million Christians around the globe suffer extreme persecution" but that "Europe remains silent again and again," while "European politicians seem paralyzed and unable to do anything, insisting that it is all a matter of generic 'human rights.'"

He contrasted the latter attitude to his own country's constitution which "states that protection of Christianity is an obligation for the Hungarian state."

Perhaps his most forthright remark was his insistence that Christians can be persecuted by "population exchange through mass migration [by members of religions hostile to Christianity], stigmatization, mockery, and the muzzle of political correctness."

And, in a telling indication of his own priorities, he expressed the hope that providing aid to persecuted Christians will help Europeans to recover their own Christian faith.

The conference, organized by the Hungarian government's State Secretariat for the Aid of Persecuted Christians (a rare example of a government department devoted exclusively to the assistance of Christians), included over 600 participants from over 40 countries. Among those taking part were Cdl. Gerhard Mueller, Cdl. Peter Erdo (primate of Hungary and archbishop of Budapest), Eastern Catholic and Eastern Orthodox patriarchs and their representatives, bishops and papal nuncios resident in Middle Eastern countries, and influential Christian figures from around the world such as Viktor Hamm, vice president of the Billy Graham Evangelistic Association.

Another of those who took part was Joe Grogan, director of Donald Trump's Domestic Policy Council, whose presence, like the letter written to the conference by President Trump, is indicative of serious commitment rather than of pro forma politics.

At the insistence of the Trump administration, the U.S. Agency for International Development created the Genocide and Persecution Response Initiative which was modelled on the "Hungary Helps" program run by the State Secretariat for the Aid of Persecuted Christians.

Though the U.S. program is not officially focused on assisting Christians, the regions and population groups on which it concentrates its efforts assure that it largely works with Christians suffering from current conditions in the Middle East and, like the agencies of the Hungarian government, it bypasses the United Nations to assure greater control over the way in which aid is distributed.

Central to Hungarian and Russian strategy for the protection of Middle Eastern Christians are efforts to create order and stability in the latter's homelands, a policy that Cdl. Robert Sarah has endorsed in other contexts and which, if successful, will, as the Hungarian and Russian governments know, be beneficial to Europe as well as to the local populations.

The danger posed to Europe by the large scale migration of peoples hostile to Christianity and Western civilization, or who would more broadly reproduce within Europe the conditions that have caused the exodus in the first place, is only one factor. Eastern European leaders have also stressed that even if migration was limited to those who would make positive contributions to their new countries, failure to correct conditions elsewhere would leave many people living under oppression, while assuring a population influx that could destabilize Europe through the impact of sheer numbers.

Recent events sponsored in whole or in part by the Hungarian government have also called attention to an important economic factor related to persecution of Middle Eastern Christians and to migration into Europe — factors that may sway those uninterested in defending Christians as a matter of principle. European nations, and in particular Eastern European nations, can gain much from international trade with stable Middle Eastern nations. Chaos in the Middle East reduces trade and its benefits while causing migration that can flood the European job market.