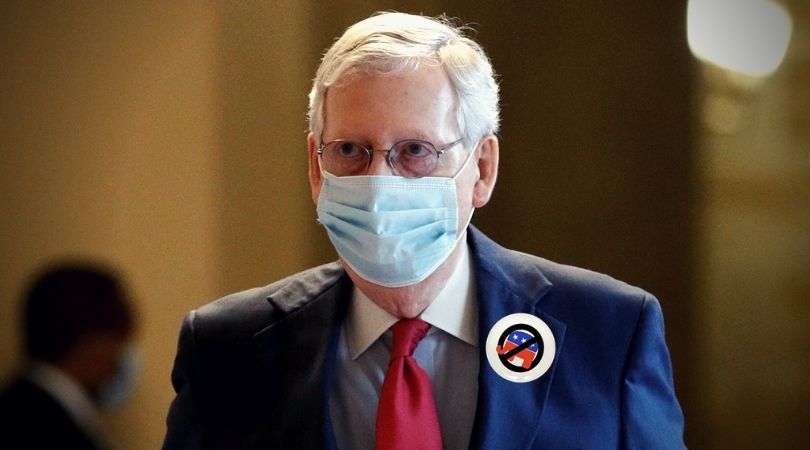 Trump has been ousted. Accept it. But don't let the Republicans who let it happen get away with it. Conservatives ought to vehemently protest the GOP, starting by denying Republicans their votes.

It's time to stand up to our leaders' empty promises, their betrayals of Trump and his supporters and their inexcusable ignorance of the recent events at the Capitol.

Why should any good-willed conservative ever vote for these sniveling cowards? These so-called leaders hid under their chairs in terror as a handful of protestors broke some windows, and "mostly peaceful" protestors walked within the ropes laid out in the morning by the Capitol building's staff?

It serves no purpose to support them. Republicans simply do not care about you, your Faith or your family. GOP leadership cares about one thing — preserving their standing with the very wealthy and very powerful elites that fund their re-election campaigns.

Was this not evident after they betrayed the voters, defrauding them by illegal state-level actions designed to sidestep election laws? Was it not demonstrated after several so-called Trump allies in Congress rolled over in objecting to election results, thus allowing a self-described infanticide supporter — one who officiated at a homosexual wedding — to take power in the Oval Office? They are not pro-life. They are not pro-family. They are not pro-God.

They could have done plenty. Instead, they did nothing.

These people don't have principles. They only stand on a principle when it's expedient to do so.

The Republicans' so-called principled stand for the Constitution is rooted in a false presupposition — namely, that there was nothing they could do to stop Biden's illegitimate election. They could have done plenty; instead, they did nothing. If they truly cared about standing for the law, why didn't they take a stand in defense of the "Electors Clause" (set forth in Article II of the U.S. Constitution) after several states (e.g., Wisconsin) violated their own laws in administering the dubious November election (using the China virus as an excuse to do it)?

Why did Vice President Pence refuse to risk it all to delay the certification of Biden's electors on Jan. 6 until a proper investigation could be conducted? It's funny how the Republicans' faux "stands" only happen when they betray their voters.

Moreover, why would Republicans, like Sen. Kelly Loeffler, backpedal on honoring the 12th Amendment by objecting to illegally conducted elections (using "mostly peaceful" protests as an excuse)? If they truly cared about the truth, a protest would not deter them.

The truth is, neither fake conservatives like Sen. Mitch McConnell and Sen. Lindsey Graham nor so-called principled conservatives like Sen. Rand Paul or Sen. Mike Lee care one bit about this. They all accepted defeat because they wanted Trump out as much as the Democrats did. Their political social club had no room for outsiders.

It all goes back to the prior point that politicians care about their careers along with the needs of the wealthy donor class and not about the plight of average Americans. All of them knew that taking a stand would hurt their status in the illegitimate Biden administration.

Establishment elites didn't like Trump. He raised their labor costs, banished the third-world peasant class they imported here back to their homelands and tariffed their slave-labor factories overseas.

Republicans wouldn't dare do the right thing for their constituents. They wanted you, the American people, to accept their cowardice and forget about it. Being a politician is supposed to be a dangerous job, not a cushy job where you make friends with your coworkers and get rich. Congress is meant to represent the people who vote for them.

When the average American is so downtrodden and angry that he bursts through the doors to complain in the middle of your workday, it's time to listen to him and see where you went wrong. But the Republicans didn't do that. Republicans, instead, twisted the knife, virtue-signaled and gasped in disgust at Trump supporters who've had their businesses forcibly closed in the spring (by them) or destroyed and/or looted in the summer (by Black Lives Matter and Antifa, whom they refused to control).

All the while, these "brave" congressmen made sure to permit banks to charge citizens a full rent bill when the pandemic lockdowns, which eliminated their income, end. They were also able to deny the people $2,000 relief checks, trading it for a measly 600 bucks, while giving the rest of the money to investment banks (like Asia RIA) and foreign countries who hate America (like Pakistan).

The sad truth is that Congress doesn't represent the American people. They represent their own lavish lifestyle and job security, relying on the ivory-tower elite to pay for it.

They don't represent any patriotic Americans, only themselves and their donors, while continuing to take the people's money.

Moral or not, it's no secret America's foundation is rising against authorities who tax without representation, and Republicans do not represent Trump voters. They don't represent any patriotic Americans, only themselves and their donors, while continuing to take the people's money.

And, to the elites who feel threatened by this populist uprising (Republican and Democrat alike), good. If you believe this fight is over or that you can muzzle this grassroots movement, you're gravely mistaken. Over 75 million Americans were disenfranchised in this election. This is why 21% of Independents and nearly half of all Republicans stand with the brave Americans who protested peacefully at the Capitol.

Good-willed patriots will work to primary you in 2022 and in every election thereafter. One thing is for certain: Many of these proud Americans will never offer traitorous Republicans another vote. They won't offer a shred of support until Republicans put God and America first.

Trump was the beginning; America First is the future. No apologies.

MI Democrat Continues to Back Trump
By Church Militant   •   0