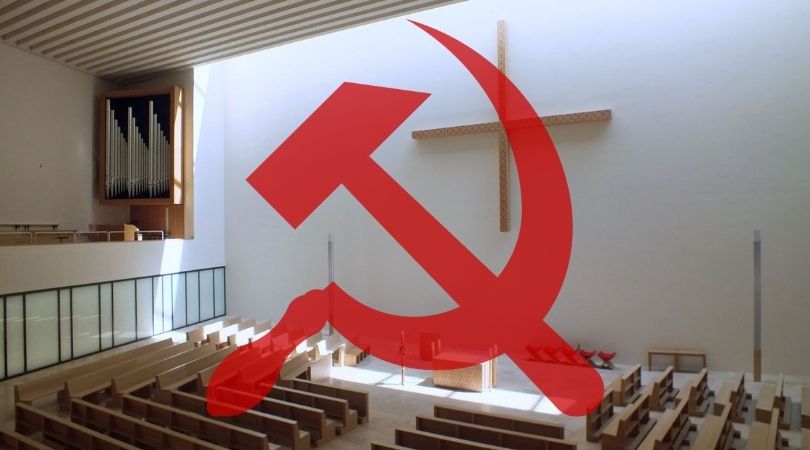 A Marxist-led effort to destroy aesthetics

For centuries, Catholic churches were a visual catechism. Everywhere a person looked, there would be visual reminders of the divine mysteries of God.

But after World War II, churches built in the United States and in Europe began to take on a blandness stemming from the rejection and reengineering of Church teaching after Vatican II.

The 1950s was supposedly a decade of Catholic resurgence in the United States — but there was a tendency to observe general norms while rejecting finer details. This was a projection of the minds of Catholics in that era. And as the details were rejected, the form was rejected soon after.

Many Catholics who were taught the Baltimore Catechism welcomed the sexual license that came with the pill.

In 1960, the U.S. Food and Drug Administration approved the birth control pill. Many of the Latin Mass Catholics who were taught the Baltimore Catechism welcomed the sexual license that came with the pill. Even many priests believed that Church doctrine on contraception would change, and they often told the people coming to them for confession or spiritual direction to keep doing it and that, soon, the Church would change.

These priests had been taught in strictly run seminaries. They were trained in solid philosophy and theology — often having their textbooks and lectures in Latin. Yet when given the chance, many took the wide and easy road toward heterodoxy.

The rounded stone arches, columns and domes of old were replaced with wood and vinyl. Red brick became the standard modern substitution for the stones that still form the structure of all the iconic churches of Christendom.

The modern mind wants Jesus without the Cross.

In his book Ugly as Sin, Catholic author Michael Rose exposed the underlying truths on the shift in the architecture of many Catholic churches. He outlined the "natural laws of church architecture."

The first of these laws is verticality. It means that a church should reach upward to Heaven. Many modern church buildings are barely two stories tall. They have square angles that don't naturally bring a person's eye to the upper parts of the church.

The third law is more obvious than the others: It's the iconography or sign-value of the church. In older churches, there are beautiful frescoes, statues and mosaics. They depict the saints and events in the earthly mission of Our Lord and Our Lady.

Modern churches are whitewashed of all paintings. They may have statues, but they often are modern art monstrosities that convey no eternal truths. In many churches, crucifixes were thrown out and replaced with a resurrected Christ in front of the Cross. In essence, the modern mind wants Jesus without the Cross.

Learn more by watching The Download—War on Beauty.