Welcome to the Desert of the Hyperreal 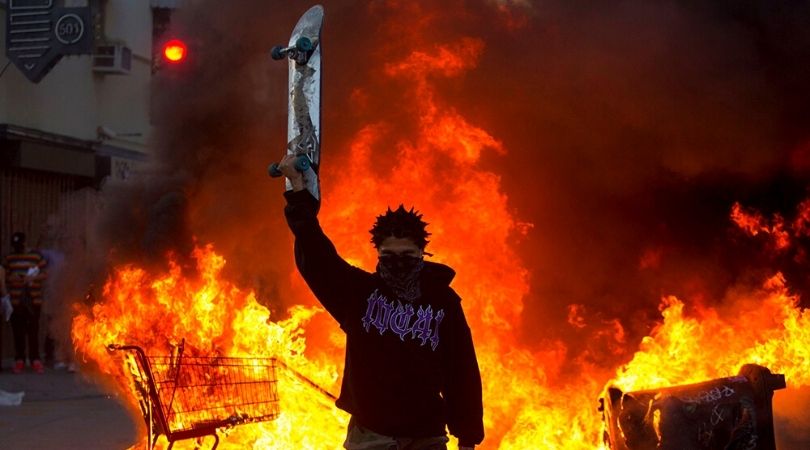 In his 1981 magnum opus Simulacra and Simulation, French postmodernist thinker Jean Baudrillard famously coined the term, "hyperreality," which the philosopher defined as a situation in which symbols, images or what Baudrillard calls "simulacra and simulation," become "more real than real."

As Baudrillard argues, for millions of Westerners during the Cold War, entranced by television, advertisements and the deluge of commodities and products of late capitalism, the world of images in which they spent the bulk of their conscious life became more real than their seemingly mundane existences.

For the sports fan, a season of the Dallas Cowboys or Manchester United — the wins and the losses, the injuries, the locker room and off-field drama — are all experienced not only as more exciting than the sports fan's life, but rather all of these things present themselves as more real than the drama and relationships of that person's own life.

Reggie Jackson's 1977 World Series game-six homer is experienced as more real than one's own birthday or one's child's baptism — or, perhaps better yet, the picture of one's child's birthday has an aura of authenticity and perfection that makes it more real and meaningful than the actual birthday.

Within the world of hyperreality, the murders on television and movies become more real than the murders occurring in one's own neighborhood. There is much more dramatic effect, the fake blood seems more real and vivid (and copious) than the real blood shed at a dope deal gone wrong around the corner in real time.

However, while there always has been the phenomenon of images being "larger than life," (the bust of Julius Caesar was always more handsome, poised and glorious than Caesar's actual appearance) something unique, Baudrillard argues, had happened in the late 20th century. Western consciousness had become completely submerged into the world of simulacra.

Baudrillard explains, "It is no longer a question of imitation, nor duplication, nor even parody. It is a question of substituting the signs of the real for the real." Baudrillard expounds that this phenomenon is a fourth state of the development of the image in which the image "has no relation to any reality whatsoever: It is its own pure simulacrum."

A family could drive to Walt Disney World in Florida listening to a synthetic radio news program along the way, mesmerized by billboards projecting consumer products with images and terms that had, in previous generations, been reserved for religious experience. This family would then visit the Epcot World Showcase and experience synthetic versions of Japan, Norway and Mexico in which the service was friendlier, the food better and the architecture cleaner and more real than that which is located in the "real" version of this country (Baudrillard unironically gives this example, noting that eating at Disney World France is a much more pleasant experience than eating at a real Parisian restaurant). At night in their hotel, this family would watch Disney cartoons and feature-length films in which animals, people and the wider world itself were all happier, more exciting and more vivid than the real world itself.

Immersed in the world of glossy magazines and television images, the postmodern Westerner becomes disenchanted with the real world, which itself becomes a desert. In his 1984 essay, "The Precession of Simulacra," Baudrillard explains that in hyperreality we encounter only glimpses of reality, which itself has become a desert devoid of meaning: "It is the real, and not the map, whose vestiges subsist here and there, in the deserts which are no longer those of the Empire but our own: The desert of the real itself."

The term, "desert of the real," would later serve as the impetus for the title of Slovenian philosophical gadfly Slavoj Žižek’s 2002 work, Welcome to the Desert of the Real: Five Essays on September 11. However, Žižek's term's more immediate source is, in fact, the 1999 film The Matrix, in which the character Morpheus shows the future messiah of a world dominated by machines that hold humans in a fantasy world as batteries, feeding them a fantasy world.

The Matrix is one of the many (rough-edged and impure) films from 1999, including Fight Club, The Sixth Sense, American Beauty and Eyes Wide Shut— all of which, on some level, deal with the dissolution of a coherent narrative of reality and burst the barriers between fiction, imagination, the afterlife, dreams and the "real world."

The overall narrative ... that all of Western civilization is irreversibly racist ... is as much a hyperreal fantasy as the world of 'Pokémon GO.'

1999 is also the year that Darcy DiNucci's Print Magazine article "Fragmented Future" introduced the term "Web 2.0" and is the year that many have identified as the tipping point of internet popularity, and accessibility began the process of its becoming ubiquitous.

Whatever the validity and strength of Baudrillard's arguments, for those who came of age during the electronic age, there has remained some ability to stand apart from the digital world with a semi-ironic distance. Nonetheless, as Nicholas Carr, himself a baby boomer, has argued in works such as his 2008 Atlantic feature article "Is Google Making Us Stupid? What the Internet is Doing Our Brains!," frequent use of digital media has a profoundly negative effect on cognitive functioning.

However, for those of the millennial and especially "Gen Z" generations, proving Baudrillard's point in a much more profound way than earlier generations, digital media is reality, and the real world of school, work, prayer and love is merely an interruption of the "desert of the real" into the hyperreal world of Minecraft, Instagram, Twitter and YouTube.

The definitively hyperreal character of those generations who have been called "digital natives" has had a profound effect on upon 21st-century, postmillennial politics.

A strong argument can be made (at another time) that much of the far-Right or alt-right lives in a hyperreal, Web 2.0 world in which human history is obscured by racist memes, "flashy" podcasts, and selectively edited YouTube videos about world history.

However, the Left, in the form of recent rioting and street activism of Antifa and Black Lives Matter, has achieved something entirely new in the development of hyperreality. They have succeeded in turning the desert of the real into a post-hyperreality black ground in which the illusory and imaginary world of left-wing poli-sci classes and Reddit threads spills out into the streets. What has happened in the Trump Era is that the "desert of the real" itself has been transformed into a hyperreal or perhaps "post-hyperreal" playground.

Special Report: The Truth Behind BLM

Unlike the earlier generations of abolitionists and civil rights activists who were confronting elements of endemic racism in not only Southern but wider American culture, contemporary protestors are largely tilting at windmills.

This is not to say that police brutality and racism no longer exist. It is to argue that the overall narrative of the contemporary radical Left, that all of Western civilization is irreversibly racist and must be destroyed, is as much a hyperreal fantasy as the world of "Pokémon GO" or "Harry Potter: Wizards Unite."

Antifa and BLM have been able to bring this hyperreal fantasy world to life on the streets.

And like these augmented reality games (from which, at least in the case of Harry Potter, some on the Left derive much of their political and even religious ideas), Antifa and BLM have been able to bring this hyperreal fantasy world to life on the streets. These protestors think that by destroying statues of confederate generals and Spanish missionaries that are fighting the system while at the same time, the system encourages them and lauds them. They further think that, by burning buildings, cars and trash dumpsters, they are improving the lot of immigrants and people of color.

For those of the digital age, born and bred within the world of hyperreality selectively curated by leftists academics, there is no referent in the real world to which they can turn.

For the radical Left, these facts don't matter because they are too real.