The Covenant of the Jab 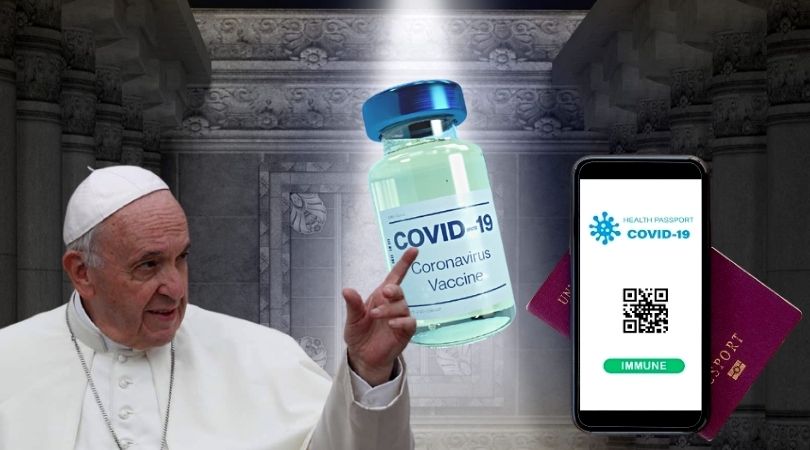 The way certain Churchmen are acting, you'd think God said, "Every man, woman and child must get the jab!" — and humanity responded in unison, "No!"

As recorded in Sacred Scripture, Abraham spoke to God, and God entered into a covenant with him and with all his descendants. For Abraham and his offspring, one important part of this pact involved circumcision. All males in Abraham's household for all future generations would bear in their flesh the mark of this covenant.

In the aftermath of God's redemption of humanity in Jesus, circumcision for male believers in the Catholic Church blessedly would no longer be a requirement for membership. Recall from Scriptures that St. Paul went to bat for Greek converts against those in the Church called Judaizers, who asserted that circumcision was still required for membership in the Faith. As recorded in Paul's letter to the Galatians, Paul even stood up to St. Peter on this matter and won.

In strong words against these Judaizers, Paul made his point crystal clear in the convert community of Galatia: "See what large letters I use as I write to you with my own hand," (Galatians 6:11). Those who want to impress people by means of the flesh are trying to compel you to be circumcised, he says. They do this, explains Paul, to avoid being persecuted for the Cross of Christ.

He writes, "Not even those who are circumcised keep the law, yet they want you to be circumcised that they may boast about your circumcision in the flesh. May I never boast except in the Cross of Our Lord Jesus Christ, through which the world has been crucified to me, and I to the world" (Galatians 6:13–14).

Circumcision is one invasive, over the top and unnecessary medical procedure, if there ever was one! For the last two millennia, there haven't been any additional invasive medical procedures mandated for being a part of the body of Christ in the Church — at least not until now.

One could assume from how strongly Pope Francis pushes for the jab that God Himself revealed to the Holy Father that to be fully part of the Church, in addition to the Churchs' sacraments of initiation — baptism, confirmation and Holy Communion — that a person now needs to go through the additional sacred rite of getting the jab! Only people with all of these sacraments, including the "sacred jab," are now to be considered fully Roman Catholic in the eyes of Pope Francis.

Like the ancient rite of circumcision among the Jews, I'm certain that a fully approved, fully annotated ritual for the Church's new "eighth sacrament" is in the works. Most probably, the Holy Father — being so inspired by the Almighty — will make certain this soon-to-be-developed rite of administrating the so-called new sacrament will mirror the ancient Jewish Brit Milah ceremony. This would call for a new hybrid minister of sorts — both a priest and nurse, who could administer the sacred hypodermic shot, as well as offer all the required prayers.

Only people with all four sacraments of initiation, including the 'sacred jab,' are now to be considered fully Roman Catholic in the eyes of Pope Francis.

But please don't wait for the priests to have the new ritual book because that doesn't really matter. What's more important than the words of the novel ritual is to get as soon as possible this God-mandated "sacred jab." Centuries from now, Pope Francis will be known for fixing for his predecessors, who sat before him on the throne of Peter, this heinous sacramental omission. He'll be honored as Pope Francis the Great, who introduced the "sacred jab" and ushered in for the globalists an era of worldwide prosperity and happiness.

What rot! Utter B.S.! Unlike Abraham, Pope Francis did not go through some great theophany (nor did any of our Church's cardinals) in which God somehow revealed his desire that each and every man on earth must accept the jab! There is no such a thing as an eighth sacrament, the "holy jab." And frankly, Francis should stop advocating for the jab as if it is a proven, God-given good for humanity!

On the level, the jab is substantially just a novel, experimental gene therapy for COVID-19. For one thing, at this point, longitudinal studies have not been completed to ascertain what the shots' latent or long-term effects on the population will be (if any). These rushed-to-market therapies have yet to be proven safe because no time has been allotted for clinical studies to make this determination.

Those in charge have fundamentally waived all restraint in foisting these novel gene therapies upon the masses, jeopardizing the health of all humanity. On the one hand, in the best-case scenario, what's playing out may be an exercise in the domination of the population by those in charge. In the worst-case scenario, what is playing out may simply be stage one in destroying the health of hundreds of thousands, if not millions, of the world's inhabitants.

Time will prove whether getting the jab was good, bad or really bad. It is imprudence of the worst sort, thus, for the Holy Father and other elites to push the jab upon the entire world. They are forcefully pushing mandates and engaging in moral arm-twisting that absolutely every man, woman and child on earth get the jab. This comes without concern for control groups,  exceptions and medical or religious exemptions.

Why are the elite so riled by exceptions or exemptions? Because those in power supposedly know what's best. This is the pivotal assumption for this unprecedented attack against the entire human race by the globalists, including the Holy Father. They cherish the misconception that somehow they — the globalists and Church hierarchy, not any individual person — have the right, ordained by God, to determine what is best for everyone.

The God-given right of self-determination — the right of a person to decide what, if any, invasive medical procedure or therapy is personally acceptable — has been ripped away by these globalists. Just two years ago, no one in America would have believed that their right to bodily autonomy and informed consent would be denied without batting an eye. There's no need to sign medical consent forms anymore as big government knows what's best for the health of every citizen; no signature required!

Thousands of years ago, all males were circumcised to show their faith in the one true God of Abraham. Now what is being required of humanity is that all men and women show their true faith (or lack thereof) by participating in the new black sacrament of the jab. It matters not if the needle hurts, or if the contents were manufactured through the deaths of innocent human lives, or that there are numerous adverse reactions being reported. What does matter is full participation in this black sacrament — to bear witness to the globalist and humanity's lockstep allegiance to their agenda.

God has not revealed to any pope or layman to mandate the jab. Please, Pope Francis and crew, stop pretending that He has.

God has not revealed to any pope or layman to mandate the jab. Please, Pope Francis and crew, stop pretending that He has. There is no eighth sacrament in the Church.