Where Else But in God Is All Our Greatness?

An article I read this week reported Kristen Day's warning that the position of all the Democrats poised to compete for the Democrat Party's presidential nomination is "the most extreme it has ever been." She believes that "fighting for the abortion lobby vote" during the primary season "could turn around and hurt them all in the general election." Day believes that the Party must return to the position Hillary Clinton once claimed: "Safe, legal and rare is something most pro-life Democrats could accept, but paying for abortion up to nine months with federal funds is extreme."

Of course, since the Democrats in the U.S. Senate voted to permit infanticide (or as some would have it, post-natal abortion), Day's hope has been OBE. That vote illustrated the truth: It proves that support for the specious jurisprudence the SCOTUS embarked upon with the Roe v. Wade decision is exactly the slippery slope real pro-lifers have always held it to be. Our constitutional self-government as a people has always depended on the premise of God's authority.

Our constitutional self-government as a people has always depended on the premise of God's authority.

Reject that authority, and the world returns to the dog-eat-dog premise that "might makes right," so that any human will, however evil, can claim to dictate law and government, provided it gathers sufficient strength. With no God-endowed authority, the transcendent rule of conscience securing respect for the intrinsic worth of all — regardless of their relative power — the evil bent of our licentious nature pushes, by all means, toward the most extreme atrocities.

This is the lesson we must draw from the massive purges perpetrated during the 20th century, by socialist and communist regimes built upon an ideology that rejects the very idea of God. It holds true of the battle for votes, just as it has always held true of armed battles for conquest and empire. Where God is denied, there is no end of evils, no limit to "the evil that men do."

With this in mind, we cannot but observe that, though Day's warning may serve the partisan political interest of the Democrat Party, it does not serve the interest of the American people. Our union is staked upon the self-evident truths, dependent on God's authority, that made and have preserved us, a nation. Those truths leave us free to pursue our pledge of dedication to liberty and justice for all. For that, nothing will suffice except to erase the heinous lie which speciously "legalized" abortion. Abortion is contrary to God's endowment of right. It cannot be lawful for us, and a people, and will never be safe for our liberty. Just as the rarest of poisons may, even so, be most deadly, the worship of abortion is destined to be fatal to our existence as a people.

This weekend I am in Altoona, Pennsylvania, speaking at events promoting the cause of life and reverence for God's authority, as the only true cause of our nation's greatness. I will stress, to all who have the ears to hear, my belief that the Roe v. Wade decision pushed America over the brink into an abyss of evil. Our nation's inevitable fall has been gathering momentum ever since. Yet that fall was itself the fruit of our previous acquiescence in a false doctrine of government, a doctrine contrary to our founding and fatal to the character we must maintain as a people. It turns the separation of Church and State into an abyss, alienating our nation from the God Whose good will defines our freedom, Whose guidance sets us free.

Earlier this month I posted an article detailing the argument that shows how the Constitution itself refutes the false logic on which the SCOTUS relied in the Roe v. Wade decision. From now on, I will make exposing that falsehood the centerpiece of all my speeches against the evil Roe unleashed. I will not do so just to end the abortion holocaust. I will do so praying to God and Christ that, if we can finally repent of our tolerance for the Court's murderous error, they will, by their Holy Spirit, spare us the devastation of human right, justice and liberty that is poised to wipe out our existence as a nation.

The battle for life has ever been about our reverence for God. Abortion has ever been a facet of the age-old hatred of God. It is time for us to stop pretending that what is at stake is just the physical life of our nascent (and now, also, fully born) human offspring. For we are all, in fact, the offspring of God's benevolent will. When we reject the innocent persons called, by the promptings of our nature, into existence in the womb, we reject the intention of God's Word, the Word by which He made us in His image and likeness of God, before He took it upon himself, to save us.

The battle for life has ever been about our reverence for God.

With this rejection of our vocation as persons, we betray the future of humanity. With this rejection, we betray the wholesome cause of our existence as one nation. With this rejection we betray the true and only Good Samaritan — Who cloaked us in the Holy Spirit of His ministry of love; laid down His life to nourish our hope with His Flesh and Blood; and laid down His perfect Godness, to save us, once and for all, from the journey of death on which we were embarked. As a nation, we must accept God's will to save us, at once returning our allegiance to Him so He may do, by our good will, what He has planned to do all along. The prophet Jeremiah speaks to America as well as to Israel when he reports this word of God:

For I know the plans I have for you, says the Lord, plans for welfare and not for evil, to give you a future and a hope. Then you will call upon me and come and pray to me, and I will hear you. You will seek me and find me; when you seek me with all your heart, I will be found by you, says the Lord, and I will restore your fortune. (Jeremiah 29:11-14)

This is a promise that foreshadows hope to all who choose, time and again, to be God's people. It is the only hope that will make this nation, gathered by God's grace from all the peoples of the earth, a living witness to the destiny God planned when first His Word proclaimed, "Let us make man in our image, after our likeness." Where else, but in the observance of this, His Word for our Creation, is all our greatness? 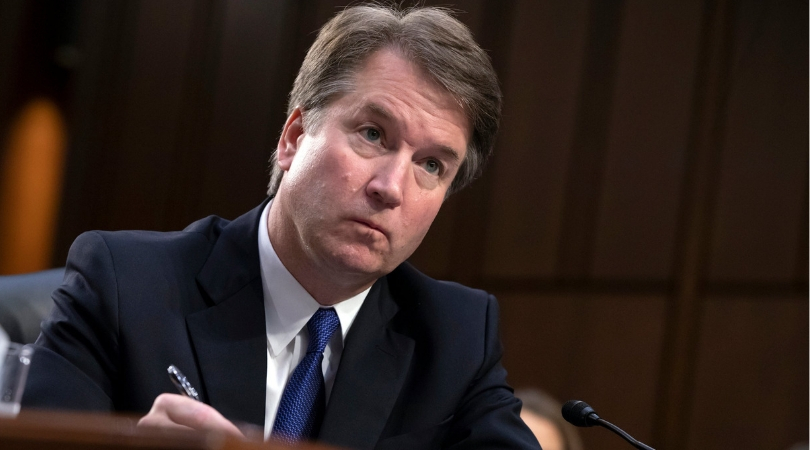 With All Eyes Open, I Still Pray to God That Kavanaugh Proves Me Wrong
By Dr. Alan Keyes   •   0