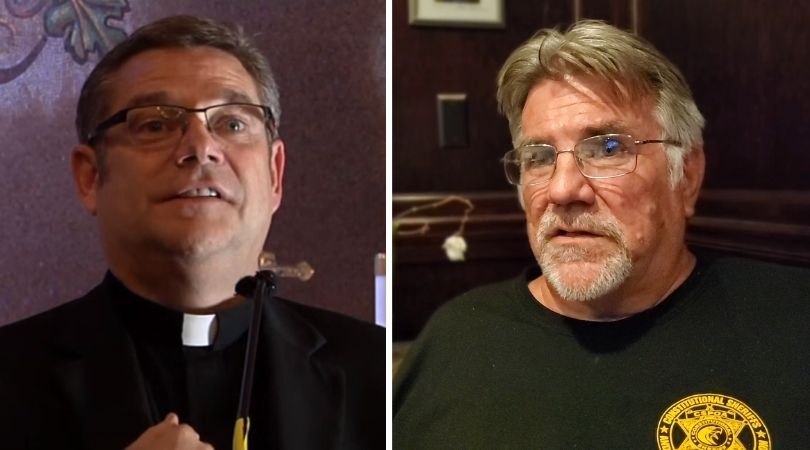 BAKERSFIELD, Calif. (ChurchMilitant.com) - A whistleblower on clergy corruption is fighting attempts to silence him.

Stephen Brady, president of Roman Catholic Faithful (RCF), an organization dedicated to exposing corruption and sex abuse in the Catholic clergy, has had to spend many thousands of dollars — even mortgaging his home and spending his life savings — to defend himself against a defamation lawsuit brought by Msgr. Craig Harrison. A priest of the diocese of Fresno, California, Harrison was placed on leave in May 2019 after at least half a dozen men stepped forward accusing him of abuse when they were teens.

"This is an action brought by a powerful public figure, using all of his extensive resources and connections in his local community, to engage in a pattern of rank intimidation against those who speak against him," argue Brady's attorneys in his latest court appeal. "He's sued a victim, an investigator and his own diocese — and enlisted his brother to engage in a campaign of harassment."

This is an action brought by a powerful public figure to engage in a pattern of rank intimidation against those who speak against him.

In comments to Church Militant, Brady's attorney, Paul Jonna, said, "We are confident that the Court of Appeal will agree that this is a frivolous lawsuit that should be summarily dismissed as an attack on protected and privileged First Amendment activity."

"Because we believe that this case was brought in bad faith, our clients also intend to sue Harrison for malicious prosecution after the case is dismissed," said Jonna. "If Harrison thought he could file frivolous lawsuits to send the message that he was 'clearing his name' without much of a fight, then he chose the wrong defendants."

Harrison has been accused by multiple men of sexual assault and was suspended from ministry last year, as the diocese of Fresno investigated the allegations. Harrison was also under investigation by three separate police departments: Bakersfield, Merced and Firebaugh, where the alleged incidents took place.

Both the Merced and Firebaugh police departments forwarded their investigations to their respective district attorneys. While no criminal charges have been filed, these were not exonerations; the Merced and Fresno district attorneys made clear the only reason they were not pursuing criminal prosecution is because the allegations — which were deemed credible — were barred by the statute of limitations.


The Bakersfield police were criticized for conducting a "sham" investigation, as it ignored 95% of witnesses, failing to call them or interview them — including Brady. Marred by a reputation for corruption, the Bakersfield Police Department was questioned for its close relationship with Harrison, their official chaplain, with critics accusing them of bias.

Harrison remains suspended from priestly ministry while the Fresno diocese continues to investigate the allegations. Harrison has also sued the Fresno diocese for defamation, as well as another whistleblower, Br. Justin Gilligan, who was the first to come forward publicly and expose grooming behavior by the Bakersfield priest.

Harrison filed the defamation lawsuit last year after Brady held a press conference announcing he was looking into sex abuse allegations against the priest — allegations Brady himself had helped uncover back in 2004, through the work of retired FBI agent Thomas Walsh.

Among the allegations reported by Walsh after speaking with alleged victims:

"Nothing Mr. Brady said at the press conference was false," Jonna told Church Militant, "and Harrison will be subject to extensive discovery over the issue of whether in fact he engaged in sexual abuse of minors."

In response to Harrison's suit, Brady filed an anti-SLAPP motion (Strategic Lawsuit Against Public Participation) in October asking the court to dismiss the lawsuit because it was brought primarily to chill his valid exercise of free speech under the First Amendment.

After the trial court ruled against Brady earlier this year, he filed an appeal in July before the California Court of Appeal, renewing his argument that Harrison is simply trying to silence him from speaking out on clergy sex abuse.

Harrison "was named a 'Monsignor' by the Pope, and rose to be the Dean of the Bakersfield Deanery — making him the highest-ranking Catholic prelate in Bakersfield," notes the appeal, "With the local Bishop over 100 miles away in Fresno, the Very Rev. Msgr. Craig Harrison became the face of the Catholic Church in Bakersfield."

"But Harrison is not just the face of the Catholic Church in Bakersfield. He is also [the] 'most popular religious figure in town,' and became the media's go to commentator for all things religious," the court document continues.

Harrison, a well-connected figure who is reportedly wealthy and, according to witnesses, has a gambling addiction, has used his connections to wealthy donors to raise money for his litigation. His brother, Rick Harrison, sent a series of harassing emails to Brady last year, revealing the priest had raised $90,000 in a single day, going on to claim his brother has "millions of dollars" to fund his lawsuits.

Meanwhile, Brady has had to mortgage his home and spend his savings in order to defend himself against this lawsuit. His organization is currently accepting donations to help fund his legal defense.

Brady's exposure of the site led to its being shut down and clergy disciplined.

RCF was also first to expose homosexual corruption in Fresno, including the gay lifestyle of Fr. Michael Lastiri, who spent most of his priestly career as an active homosexual — even in a sexual relationship with a convicted pedophile. RCF exposed Lastiri's online activity, which included solicitation for sex from other men, and his embezzlement of $60,000 from his parish.

"RCF and Mr. Brady will fight vigorously to defend their good reputations and their First Amendment rights," Jonna told Church Militant. "If the case is not summarily dismissed in a few months, then they will aggressively defend themselves by proving that all of their statements were protected, privileged and true."

Incredibly, Harrison has compared himself to defamed Detroit priest Fr. Eduard Perrone, who recently won a lawsuit for defamation against Sgt. Det. Nancy LePage, who fabricated a sodomy charge against him. The two cases dramatically differ, however, as Perrone's accuser has explicitly denied he was ever raped by the priest.

Interview transcripts also show LePage, along with Detroit's Msgr. Michael Bugarin, manipulated and pressured the accuser to make abuse allegations against Perrone, allegations he later contradicted. Unlike Perrone, Harrison has been accused by at least six alleged victims, some who have gone public. A number of Harrison's accusers — who did not know one another — report similar incidents from different time periods and different locations, lending credibility to their allegations.

Harrison came under criticism for profiting off a potentially illegal scheme in 2017 where his school obtained approximately $26,000 and 160 free laptops from a dual-enrollment plan with a local school district. The plan was shut down after Los Angeles County education officials launched an investigation into the scheme to determine whether taxpayers had been defrauded.

Harrison's response to Brady's appeal is due on Aug. 14. Brady's reply brief is due on Sept. 3, after which the matter will then be set for oral argument. Harrison is also required to attend a contempt of court hearing on Sept. 9 for violating court orders and publishing confidential documents produced in discovery.