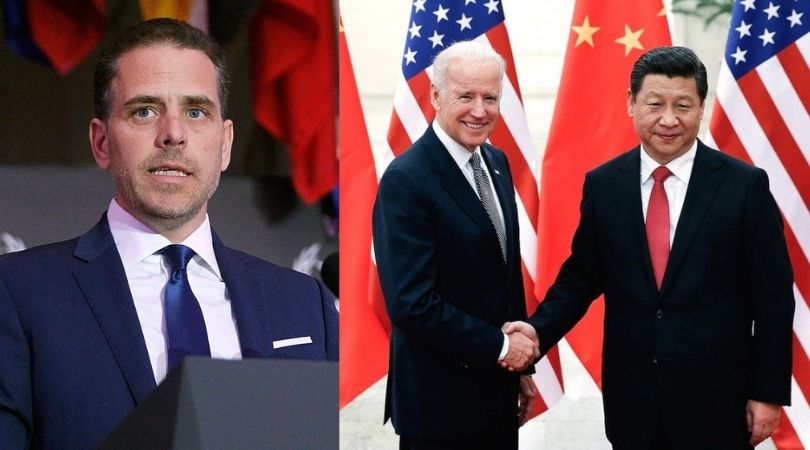 WASHINGTON (ChurchMilitant.com) - A whistleblower is claiming there are multiple videos on Hunter Biden's laptop showing him raping and torturing underage Chinese girls, and that the Chinese Communist Party is using these videos as blackmail against Democrat presidential contender Joe Biden.

DingGang Wang, a member of Miles Guo's team, which has worked with Steve Bannon and Rudy Giuliani for many months, said in a Sept. 24 broadcast for Lude Media — two weeks before the New York Post bombshell — that he has reviewed the contents of a laptop owned by Hunter Biden.

"So what about Hunter Biden? Sex tapes, pedo tapes, one by one — Hunter Biden," said Wang. "Extremely disturbing and obscene ..."

Indicating extreme abuse, he continued, "Not treating the Chinese as human beings."

"Who filmed these?" he asked. "The Chinese Communist Party (CCP) did it!"

"The message of the CCP is: Don't ever think I don't have your secrets in possession," Wang explained. "To give you this hard drive is to let you know that, don't forget, we have evidence of your crimes. You have to win this election."

Sexual blackmail is a classic tactic of the communists, and was routinely used by the KGB. In addition to the famed "honeytrap," wherein female KGB agents seduced American men and caught their misdeeds on tape, there is evidence General Secretary Yuri Andropov created pedophile rings in order to blackmail businessmen and political leaders.

The tactic is also used in communist China.

"The CCP was accused in 2015 of using attractive women to seduce spies from the British MI6 intelligence agency and lure them into honeytraps to obtain state secrets," writes Joshua Philipp. "A top-secret MI6 memo obtained by the UK's Mirror news outlet said Chinese spies were 'aggressively' targeting spies and their families."

Hunter Biden's attorney has acknowledged the laptop belongs to his client in an email requesting that it be returned to his client.

One of Hunter's former business partners, Bevan Cooney, independently verified the authenticity of the emails, a number of which included him.

Tucker Carlson of Fox News also confirmed that his own team independently authenticated the contents of the laptop.

"This afternoon we received nonpublic information that proves, conclusively, this was indeed Hunter Biden's laptop, period," Carlson said during a broadcast last week. "The materials on the hard drive of that computer that no one but Hunter Biden could've known about or have replicated. This is not a Russian hoax."

"We are saying this definitively. We are not speculating," he added. "The laptop in question is real. It belonged to Hunter Biden."

The President must confront the director of the FBI on why the information housed on this hard drive was not moved on immediately.

Steve Bannon, who has been working with former New York mayor Rudy Giuliani to ensure the trove gets to various news outfits, confirms the explicit content on the laptop:

Joe Biden is a liar, a fraud, and compromised by Chinese cash. In short, he is a national security crisis. The hard drive combines emails and text messages that show a massive involvement with companies controlled by the Chinese Communist Party. Also, there are 25,000 images that show a drug-addled, depraved lifestyle — one that decent hardworking Americans will not want near the White House.

As to why the FBI, which has had the laptop since December 2019, has not acted on the reportedly illegal content, Bannon said, "The President must confront the director of the FBI on why the information housed on this hard drive was not moved on immediately."

He urged President Trump to confront FBI Director Christopher Wray: "If Wray doesn't have a bulletproof reason, he should be fired in the room."

"Well, I think you just made the connection," Johnson said.


Giuliani said Monday on Fox and Friends that explicit photos and videos on the laptop will "shock the hell out of you" and reveal "federal crimes."

"And really, the photographs will shock the hell out of you," said Giuliani. "These photographs are disgusting, and they make him a national security risk for the United States of America, because every photograph I have, China has, plus a lot more."

Giuliani did not specify what federal crimes are contained in the photos and videos, but he could not have been referring to consensual sex between two adults, which is legal. Sex with minors as well as possession of child porn, however, are federal crimes.
In a recent Warroom: Pandemic broadcast, Bannon warns the Bidens there is much more coming.
"You're going to be buried in an avalanche of evidence of your corruption and how you've sold out America," Bannon said. "You've sold out America to the equivalent of the Nazi Party in the 1930s. That's what the Chinese Communist Party is."

While Joe Biden called this a "smear campaign" on Friday, he has not denied the authenticity of the emails. And while Democrats and left-leaning media have accused Giuliani and Bannon of working with Russian operatives, Director of National Intelligence John Ratcliffe confirmed Monday Russian collusion is not involved.

"Hunter Biden's laptop is not part of some Russian disinformation campaign," said Ratcliffe on Fox News. "Let me be clear. The intelligence community doesn't believe that because there is no intelligence that supports that."

Hunter Biden's laptop is not part of some Russian disinformation campaign.

He rebuked Democrats for spreading the Russia narrative.

"And this is exactly what I said would I stop when I became the director of national intelligence" he explained, "and that's people using the intelligence community to leverage some political narrative."

"Don't drag the intelligence community into this," he added. "Hunter Biden's laptop is not part of some Russian disinformation campaign. And I think it's clear that the American people know that."