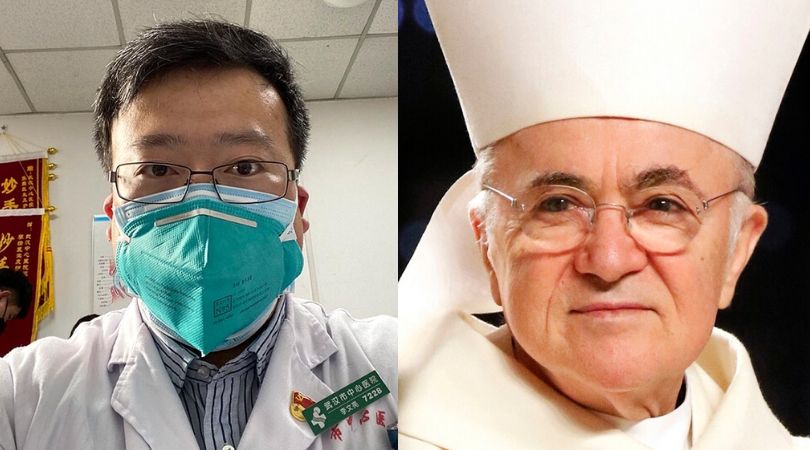 The death of whistleblower Li Wenliang, a medical doctor who was apprehended by Wuhan police for warning the public about the deadly threat of the coronavirus, has sparked "a level of collective anger and grief unseen on Chinese social media."

The way communist Chinese government officials have mishandled the coronavirus pandemic is akin to the way Catholic Church leaders have covered up the true extent and real cause for clerical sex abuse.

While the majority of reports of abuse over the past years have come out of the United States, the Vatican office responsible for clergy sex abuse cases has reported processing a record 1,000 cases in 2019 alone, many from countries it had not heard from before. This development has led some Vaticanists to believe that "the worst may be yet to come."

In 1985, Dominican Fr. Thomas Doyle warned Vatican officials and all the U.S. bishops about the serious consequences of clerical sexual abuse in his co-authored report, "The Problem of Sexual Molestation by Roman Catholic Clergy: Meeting the Problem in a Comprehensive and Responsible Manner."

The way Chinese communist officials dealt with Dr. Li Wenliang is reminiscent of how Church leaders relieved Fr. Doyle of his position at the Apostolic Nunciature in Washington, D.C. and buried his co-authored report. It was then-Abp. Edwin O'Brien who revoked Doyle's ecclesiastical endorsement and ex-Cdl. Theodore McCarrick who denied him priestly faculties, lest he inform parishioners of the abuse of minors, seminarians and young adults he knew was being committed and covered up.

Just as hundreds of thousands of people could have avoided contracting the coronavirus had Chinese communist officials taken the advice of Dr. Wenliang, thousands of Catholics in the U.S. and hundreds of thousands of Catholics in the world could have avoided being sexually abused by priests if only Church officials had heeded Fr. Doyle's warnings and not covered up his report. While Doyle warned that the price tag for ignoring this problem could cost the Church as much as $1 billion, it turns out that the U.S. Church to date has paid close to $4 billion for abuse settlements and legal fees.

Doyle is not the only expert whose admonitions have been ignored and covered up. In 2001 the Boy Scouts of America were debating allowing homosexuals to serve as scoutmasters. It was more than 20 years earlier that Catholic bishops had already started accepting gays to study for the priesthood as documented by Rev. Dr. D. Paul Sullins in his 2018 study, "Report: Clergy Sexual Abuse." Before scout leaders decided to allow gays to be scoutmasters, they were warned of serious consequences by Dr. Judith Reisman, whose research, along with others, showed how "73% of homosexuals acknowledged having preyed on adolescents or younger boys.”

Powerful institutions all seem to reach a point where they work to protect themselves rather than the people the institutions were designed to serve.

As we now know, Boy Scouts officials ignored Reisman's warnings by believing those who argued there is no connection between pedophilia and homosexuality. What scout leaders failed to understand, however, was that unlike Cub Scouts, Boy Scouts are post-pubescent and not pre-pubescent children.

It was only a few years after the Boy Scouts started allowing gays to be scoutmasters that researchers from the John Jay College of Criminal Justice reported that over 80% of the victims of clerical sex abuse were post-pubescent teenage boys. The researchers further showed that the relationship between homosexuality and pedophilia is irrelevant in that "less than 5% of priests with abuse allegations exhibited behaviors consistent with pedophilia."

Hence, while homosexuals may not pose a threat to pre-pubescent children, one cannot argue that gay priests and scoutmasters pose no threat to young men and boys. If there were no risk involved, then the Boy Scouts of America would probably not have announced its filing Chapter 11 Bankruptcy on Feb. 17, 2020 just like over 20 U.S. Catholic dioceses and religious orders have already done.

It has been shown that Chinese officials greatly underreported the number of Chinese citizens affected by the coronavirus. As of Feb. 18, 2020, it was reported that "Chinese authorities may have undercounted COVID-19 infections by a staggering 520%." This underreporting is no different from the underreporting on the part of U.S. bishops to John Jay researchers. If the 2004 John Jay Study led people to believe that only "about 4% of Catholic clerics had credible or substantiated allegations of child sexual abuse of minors during the last half of the 20th century," it was because many of the bishops underreported the number of sexual abusers in their dioceses.

Before later being made a cardinal, Abp. Edwin O'Brien of the Archdiocese for the Military Services (AMS) reported just two cases of sex abuse involving minors during the 52-year (1950–2002) period of the first John Jay Study. Although these were two cases more than what Pope Francis himself reported when he was the archbishop of Buenos Aires ("In my diocese it never happened"), Bishop Accountability has since uncovered over 150 priests of the AMS with credible abuse allegations.

Chinese President Xi Jinping and Pope Francis are both under great scrutiny for their handling of their respective crises.

The Associated Press also recently identified "more than 900 clergy members accused of child sexual abuse who were missing from lists released by the dioceses and religious orders where they served." The documented gross underreporting of abuse by lying Church officials reveals that the percentage of abusive clergy is far higher than what was reported by the John Jay research team.

Just as people around the world are deeply angry at Chinese officials for their underreporting of COVID-19 and covering up reports by doctors like Li Wenliang that the novel virus truly is transmitted from person to person, so too are many Catholics and parents of Boy Scouts angry at Church and scout officials for allowing the homosexual predation of their sons instead of heeding the warnings of people like Fr. Thomas Doyle and Dr. Judith Reisman.

Chinese President Xi Jinping and Pope Francis are both under great scrutiny for their handling of their respective crises. Interestingly, Ren Zhiqiang, a major critic of President Xi, and Abp. Carlo Maria Viganò, are both reported to be in hiding. Some of Zhiqiang's friends fear for his life.

After the pope announced 18 months ago that an investigation would be undertaken in response to charges that he and other high-ranking prelates covered up for homosexual predator ex-Cdl. Theodore McCarrick, no report has yet to be forthcoming. A Pulitzer Prize-winning investigative reporter who has been covering both the COVID-19 and Catholic clerical sex abuse stories, and who wishes to remain anonymous, opined, "Powerful institutions all seem to reach a point where they work to protect themselves rather than the people the institutions were designed to serve."

Just as President Xi retaliated against Li Wenliang and others who criticized his handling of what has become a pandemic, so too have prelates like Cdl. Blase Cupich and Bp. Barry Knestout reprised against priests like Frs. Paul John Kalchik and Mark White who, like Abp. Viganò, have criticized Pope Francis and Church leaders for covering up the connection between homosexuality and the clerical abuse of minors, seminarians and vulnerable adults. Unlike Li Wenliang who is dead; Ren Zhiqiang who is "missing"; and Abp. Viganò who is in hiding; Fr. Mark White has been silenced and Fr. Paul John Kalchik has yet to be restored to ministry after he allowed his parishioners to burn a rainbow banner hung in the church by the previous gay pastor who died in the most scandalous of circumstances.